You are here: Home / Areas of Study / National Perspectives / Air India: Back to the folds of Tata
Share 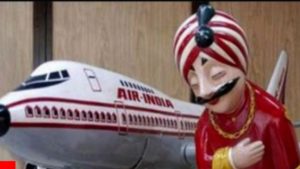 “Welcome back, Air India” tweeted Ratan Tata, chairman of TATA group and added that had Jamshed Rustomji Tata been alive he would have been the happiest man as, during his time, Air India was one of the top most airlines of the world.

Tuhin Kanta, Secretary of Department of Disinvestment, Ministry of Finance, announced that Tata group bid of 18000 crores INR was the highest and the company, having emerged on top in the bidding process, would be handed over the assets of Air India by 10 December 2021. The nearest competitor was Spice Jet consortium with a bid of 15100 crores INR.

The tender for disinvestment of Air India for the third time was floated in September, 2017. There were seven bidders. Five were rejected in the technical bid and two were found eligible for the commercial bid. The most important issue is the repayment of huge loan of Rs 61,550 crores INR on Air India . The responsibility of Tata sons is to disburse 15,300 crores to the Government; the balance  46,260 crores INR will be cleared by the asset holding company.

Tata’s will now have 100% ownership of Air India and Air India Express and 50 percent ownership in the  Cargo handling company. All  movable assets, (air fleet and ground vehicles fleet) and immovable assets including  buildings , offices , cargo/maintenance shed, housing societies etc. of Air India , 4,400  landing rights and parking slots at domestic airfields and 2,700  slots at international airports all over the world will go to Tata. Air India Head office at Nariman Point and Airlines House at Delhi will also go to the Group. Air India logos of Maharaja, Red Flying Swan and Konark Chakra will remain unchanged for minimum five years.

The founder of Air India was the legendary JRD Tata. He raised the Tata Aviation Services company in 1932 with a investment of Rs 2 Lakhs only, about 89 years ago. On 15 October 1932, he flew himself in a Havilland Puss Moth, single engine, twin seat sub sonic, propeller driven aeroplane and operated the first Air Mail Flight from Karachi to Mumbai ; later the flight headed for Madras. Initially Tata Airlines (as it was called) had only two aircrafts. During World War II, Tata Airlines carried Allied troops to the Middle East and also assisted for evacuation of wounded and refugees. Tata Airlines was even used to ferry Indian troops to Srinagar in 1947-48.

Later the company was named Air India and it went for international in operations. The first flight,  Malabar Princess, to London  took off  on 8 June 1948 . Air India was then split in to two, domestic and International. New destinations to Europe  and South east Asia were added.

Pandit Nehru nationalised the airlines in 1953 but he requested JRD Tata to stay on as chairman. On 21 February 1960, the first Boeing 707 (Gauri Shanker) joined the fleet of Air India. Air India became an all jet fleet in June 1962. BOEING 747 Jumbo – 200 B named Emperor Ashoka joined fleet in 1971. 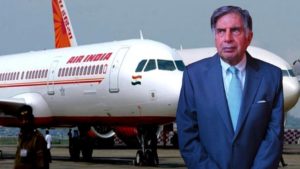 JRD Tata was an ace Pilot himself and was honoured with the rank of Group Captain in 1948  and promoted to rank of Air commodore in 1966 by Air Marshall Arjan Singh. He was further conferred the senior rank of  Air Vice Marshal on 1 April 1974 by the President of India.

JRD Tata had to resign from the chairmanship of Air India during the rule of the Morarji Desai led government in 1977 on the issue of serving liquor in International flights. Later, he was reinstated by Mrs Gandhi.

the Atal Bihari Vajpayee led government proposed to disinvest Air India  in 2001 as it was suffering heavy losses but the government could not sell. Later the UPA government also could not carry out the sale so it merged Air India and Indian Airlines in 2007. The carrier continued to suffer heavy losses. The arrival of low cost airlines like Air Deccan, Spice Jet, Air Asia, Indigo, led to a nosedive of the market share of Air India. Trade Unions prevented retrenchments of staff.

Air India acquired latest equipment at a fast pace. Airbus A 310 , Boeing 777 Dream Liners but the market share kept declining. It had to sell three A 310 Airbuses to defuse the losses and in 2013, Dream Liners were sold/given on lease to sustain itself. These cumulative factors affected the performance of the carrier. The debt trap had to be broken, so finally, it was decided to renew the effort to sell off the national carrier. Request for Proposal (RFP) was invited for the third time in 2017 and, as mentioned above, two bidders qualified for final bid  in 2019. Tata emerged the winner outbidding Spice consortium.

Air India joined Star Alliance in 2014 and shared assets with other airlines of world. It has an assorted Fleet of 130 modern Jet Aircrafts namely  Boeing 737, 747 , 777 and Airbus A319 , A 320 and A321. Air India One also its asset. The total staff of Air India is about 10,000 employees including pilots, air hostesses, technicians, maintenance staff, security, drivers and miscellaneous  workers. Trade Unions are also operational. Tata has a binding not to retrench any staff for one year. Subsequently, VRS will be activated.

Tata have declared we never say Good Bye, Maharaja  is welcome once again to the fold. The new holding company for Air India which will take over non-core assets (buildings, land , paintings etc) worth Rs 14718 crores INR will also be saddled with huge unpaid bills of airport operators, oil companies and vendors. This will amount to approximately approx 16000 crores INR, almost one quarter of the total debt of 61562 crores INR. The govt is responsible for this default as payments for purchase of tickets for own employees are overdue. The total liability to the new entity will amount to almost 80000 crores INR. The responsibility of liability remains with the Government till December, 2021 and later will be shifted to Tata.

The Tata group is an Indian multinational conglomerate manufacturer of steel, automobiles , aeroplanes, locomotives and assorted quality products including Tata Tea and Salt. The parent organisation is Tata Sons. The total annual revenue is 10600 crores US Dollars. Tata Motors, Tata Steel, Tata Consultancy Services, Tata Power etc form a part of the conglomerate. It is one entity which goes beyond profit and contributes for charity and Nation building . India swears by brand TATA. The company gained International recognition when it purchased several Global giants. Tata has taken a huge leap to revive Air India. It is expected the Air India will achieve soaring heights and regain its old reputation. The Maharaja will regain its lost glory and prosperity.