07 March, 2022–Bathinda: Irked over drug-related deaths in the district, villagers have taken it upon themselves to catch drug peddlers and smugglers. Several villages, including Harraipur, Kaljharani and Chak Attar Singhwala, have resorted to the age-old practice of “thikri pehra” (community policing) to catch peddlers. Villagers verify the identity of each person entering a village. Only if they are satisfied about the person’s identity, he is allowed to enter the village. 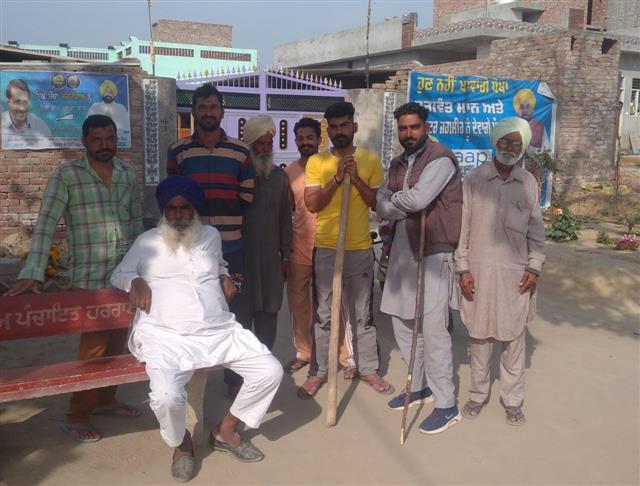 Each village has formed a WhatsApp group of the sarpanch and panchayat members, among others. If any suspected person is found roaming in a village, a message is sent in the group and all villagers gather at the “thikri pehra” spot. The person is later handed over to the police. The death due to drugs have been rising in the district. Around 20 deaths were reported in the past six months. On Saturday, a 22-year-old man died allegedly due to drugs in Sangat Kalan village, while another man was found lying unconscious in the city after having taken drugs.

Last year, a woman lost her two sons to drug overdose within a span of 10 months in Ghuman Kalan village. One of them was 29 years old and another 32 years old. Their mother Manjeet Kaur says, “I am unable to sleep as I see the bodies of my sons all the time. Even a 10-year-old child in the village knows where ‘chitta’ (a form of heroin) is sold. There is a nexus that facilitates drug trade in the state.”

The Bathinda police held a meeting with villagers a few days ago and promised support in their endeavour. Sonu Maheswari of Bathinda-based NGO Naujawan Welfare Society said, “On an average, two to three deaths due to drug overdose are reported every month. Besides, four to five persons are found unconscious every month because of drug overdose.”

Senior Superintendent of Police (SSP) Amneet Kondal said, “Police officers held meetings with villagers and assured them of action against guilty. The police have sought cooperation of villagers. I have transferred the Nandgarh police station SHO to the Police Lines and launched an inquiry against him. I also have suspended an ASI, against whom several complaints were filed.” He added the police had stepped up vigil against drug peddlers.

Cops held meetings with villagers and assured them of action against guilty. The police have sought cooperation of villagers. I have suspended an ASI, against whom complaints were filed. Amneet Kondal, Bathinda SSP