The order given by the PEPSU Road Transport Corporation (PRTC) for removal of the posters of Sant Jarnail Singh Bhindranwale and Jagtar Singh Hawara from state government buses and its retraction, almost immediately by chief minister Bhagwant Mann due to pressure from Dal Khalsa, has led to a controversy that is fast spiralling into an inter-community conflict due to inept handling.

The order was passed by PEPSU roadways on directions of the Punjab Police (ADGP Law and Order) given on the basis of complaints received about the sudden appearance of such posters on government buses. The objective was to avoid disharmony within the Punjabi society, however, due to poor implementation, the environment is becoming quite tense.

The brewing storm in the state has been further aggravated by some opposition leaders calling Sant Jarnail Singh Bhindranwale a “terrorist” in the media. Such statements have not gone down well with the Sikh community.

A noted scholar and leader of the BJP, Prof. Sarchand Singh, has strongly opposed calling of Sant Jarnail Singh Bhindranwale a terrorist and emphasised that the statements by opposition leaders have upset the Sikh community. He further added that many in the Sikh community look upon Sant Jarnail Singh Bhindranwale as their icon and role model and the majority community should respect such sentiments of the minority Sikh community. He opined that the decision taken by Punjab Chief Minister Bhagwant Mann to retract the PEPSU roadways order is a step in the right direction. Looking at the Sikh community with suspicion and targeting Sikh leaders in this manner without reason will further alienate the community warned the professor.

On many earlier occasions, scholars have refuted attempts to define Sant Jarnail Singh Bhindranwale as a terrorist. The noted scholar and BJP MP, Subramanian Swamy, has termed Operation Blue Star as “foolishness on the part of the then prime minister Indira Gandhi.” “Since Bhindranwale at that time was only 35, his style of preaching was a bit aggressive, and that’s what prompted many to think that he was a hardliner, even a terrorist. I met him many times before this operation. He would l media to the Akal Takht in routine. Why would any terrorist hold press conferences?” said Swamy in a lecture delivered in a prominent university of Punjab. 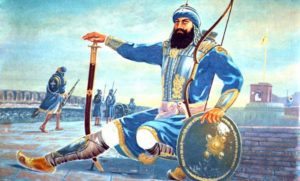 Iqbal Singh Lalpura, Chairman , National Minority Commission, is of the opinion that calling Sant Bhindranwale a terrorist at this point in time when he is no longer in the world to defend himself is not a wise thing to do. He has highlighted the need to understand as to who are the heroes of Punjabi. “The most important character who is admired or remembered for having done something difficult or unique in adverse circumstances is a hero for Punjab,” says Lalpura. “Hero’s are praised and their message that ‘impossible must be read and pronounced as possible’ forms the hallmark of Punjabi thought,’ he added.

Lalpura further expressed the view that no human can match the life of the Sikh Gurus, who rebuilt the character of the nation during their holy stay in this world for 239 years. The next generations also has heroic deeds to their credit. Baba Banda Singh Bahadur defeated and destroyed the large Mughal Army, created Khalsa Raj and, as a benevolent king, made tillers the owners of the land in a perfect demonstration of secular thought. Nawab Kapur Singh and Sultan-ul- Quam Sardar Jassa Singh Ahluwalia defeated Ahmed Shah Abdali and held suzerainty of Delhi. Sardar Charat Singh, Sardar Jassa Singh Ramgarhia, Maharaja Ranjit Singh, Hari Singh Nalwa etc are hero’s whose portraits should adorn ever gallery and public place in Punjab and across the world.

The question that needs to be asked here is as to why the portrait of Maharaja Ranjit Singh does not adorn the office of the chief minister of Punjab? Are we looking at Marx, Lenin or Mao to guide Punjab?

The Punjab Government should not succumb to the psychological pressure of such elements who wish to misuse the name of Sant Jarnail Singh Bhindrawale for furthering a divisive agenda that he never supported. He was neither a terrorist as he is being made out to be by some, nor was he such a big icon in the vast array of heroes of Punjab that only his poster should adorn public property.

The period of militancy was, in no small measure, a creation of the Congress party. Now the big issues of those very sad time that need to be g resolved are justice to the victims of the 1984 genocide and release of the “Bandi Singhs.”  The central and state governments should work together closely towards an early closure to the sensitive issues as also ensure that the people of Punjab recognise their real heroes and follow their footsteps.