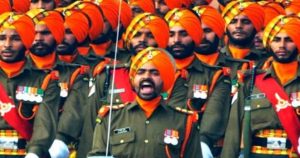 The Chinese don’t like the Sikhs, their war cry, ‘Bole So Nihal, Sat Sri Akal’ frightens them, their huge frames with long hair and beard frightens the clean shaven slick looking Chinese.

At Doklam, three years ago, the best of Chinese troops had wilted under the brute strength of the Sikhs, one of whose Havildar likened the push and shove to Kabaddi.

On the night of 15, June, as the 16th Bihar troops faced a murderous and treacherous unprovoked Chinese assault, taking heavy casualties, they found critical support from the gunners of the 3 Field Regiment and 3 Punjab.

The valiant Khalsa’s launched a barehanded counter-attack with their trademark blood curling war cry about an hour after the Bihar troops had got embroiled in the savage hand-to-hand combat , having to fight with sticks , bare hands, rocks and with weapons snatched from the Chinese.

“They killed all the six guards and dragged the senior officer by the scruff of his neck in a bloody fight lasting for 30 minutes,” said an eye-witness of the 16 Bihar Regiment. “They fought like men possessed, smashing Chinese heads with rocks and slashing them with swords snatched from the Chinese.”

Other Chinese troops in the vicinity fled or stayed away, in sheer fright.  Two Sikh Gunners died when struck by swords but one of them strangled a Chinese to death in the squeeze of his massive biceps, all along shouting ‘Bole So Nihal, Sat Sri Akal.” 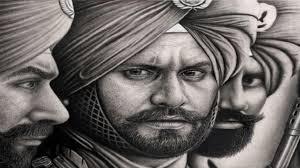 The angry, bloodied Sikhs were about to thrash the senior officers when the JCO leading them glanced at the stars on his epaulets and stopped them, imagining he must be colonel.  The JCO was right — this was the Chinese colonel who had planned the treacherous attack on Colonel B Santosh Babu, CO, 16 Bihar.

This CO greatly helped fast tracking of GOC level negotiations held between the two sides on 17/18 Jun, leading to quick exchange of 10 Indians against the lone captured Chinese Commanding Officer.

That the ten Indians including two Majors were released without torture and torment might owe itself to the Chinese Colonel being in the custody of Sikh gunners.

Down India’s medieval and modern military history, the burly and fearless Sikhs have turned the fate of many a battles with sheer bravery.

They and their corps commander, Lt. Gen. Harinder Singh, again proved they are peerless warriors on the night of 15, June.