The RSS, i.e, Rashtriya Swayamsewak Sangh, had always been an enigma for me. Having been brought up in a family of senior government functionaries for three generations, I always noticed the aggressive disposition of the ruling political parties to dub RSS as communal and divisive, and at times a violent right wing organization juxtaposed to the leftist leanings which were the fashion of the day. 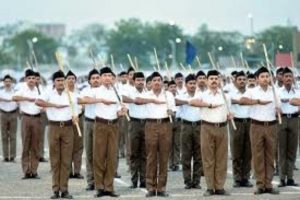 I remember having received, like other students, free packets full of Communist books and literature translated into English, Punjabi and Hindi, free diaries and world class calendars in my college days. The youth of the day, growing up in a bi-polar world with a mighty USSR blunting the USA at every step, was bound to have a rather peculiar outlook, further overawed by the Indo-Russia friendship treaty, and also because Pakistan was using American tanks and aircrafts against India. Revolution, change, ‘Inquilab’, etc. were the fashionable jargon, further etching itself in formative minds of the youth with the claims of iconic martyrs like Shahid Bhagat Singh being votaries of the leftist ideology.

India under Shri Atal Behari Vaypayee brought another flavor to the fore perhaps for the first time, though the RSS playing a reticent and withdrawn role because of the compulsions of a coalition. With the pure majority of BJP governments under Shri Narendra Modi, the RSS has started taking pains to de-mystify itself and laying down before one and all a socio-political roadmap that perhaps drives a vast majority of Indians, who stand by the RSS’s idea of a strong nation.

Yesterday, when a friend sent me a link to listen to an address by the RSS Chief Shri Mohan Bhagwat live on social media, my curiosity took me to tune in for the first time, and listen to every word of it, eagerly expecting to hear a mouthful about the Tabliqui Jamaat’s becoming the political hotspot of Covid19 induced social revulsion. I was indeed pleasantly surprised that it was not so. Starting with emphasizing the need of a technology shift from conventional to digital communication for social interaction during the unavoidable ‘physical distancing’, the RSS chief wanted the life to move on to the right course despite the physical constraints that Covid19 is likely to cause. Imploring his cadre to utilize this precious time to self-introspect for self-improvement for inculcating public spiritedness in the social cause, he urged everyone to be a good example oneself, and then move on to make the family and the society a better example of rendering selfless service: no selfishness, no self-ego satisfaction and no self-publicity, because what we do is what we ought to do for our own country.

The simplicity and directness of a clearly flawless discourse took me further into it. The RSS Chief advised his cadre to stay healthy, obey rules and restrictions, maintain physical distance, and thereafter go out for philanthropic outreach with all necessary permissions. Lauding lacs of his subsidiary organisations already engaged in providing food and other essentials to the needy during the Covid19 crisis, he advised his followers not to panic in the face of the pandemic, maintain mental balance and retain high level of self-confidence to continue the service whole heartedly and with full vigour till the pandemic lasts. Imploring to maintain self discipline and resultant good health, he inspired his followers to present their body to the cause of service of the fellow humanity.

Emphasising the need to reach out to the entire humanity in need, the RSS Chief lauded the Indian gesture of supplying essential medicines and medical equipment to any country, any people without any discrimination, be it the USA or Afghanistan. His message was clear and direct when he wanted his cadre not to discriminate between man and man, and serve everyone with an affectionate demeanour. While he admired the Narendra Modi government for showing remarkable alacrity in decision-making to save the people of India from Corona virus, he asked his followers to do social service with the same zeal and to maintain patience, never to get provoked to violence even by the heinous incidents like lynching of Hindu monks at Palaghar, or by anyone else trying to exploit the pandemic stress for political gains and thus weakening the national integrity. He wished the leadership of groups of all hues to educate their followers in the same spirit of national integrity and oneness.

On the economic front, the message was that of back to the basics in contrast to mindless consumerism. With emphasis on ‘Swadeshi’, he described it as the pillar of self-reliance, though he advised the manufacturers to bring in measures to improve the quality of their products and make their prices compatible with the imported stuff. His vision revolved around reviving industrial activity with emphasis on energy efficiency, employment generation and environmental issues. He advised the Indians to use Indian goods wherever possible, and take the nation on the path of sustainable development by devising strategies to save water, trees, environment and switching over to organic agriculture and pure allied agriculture activities like cows rearing.

Emphasising that every evil throws up a streak of great possibilities, the RSS Chief expressed stisfaction on two counts; viz, that it has been well understood in the face of our fight against the pandemic that the government, the society and the people have to move together as one united force to build a strong nation; and secondly, the lockdown has provided a golden opportunity to increase the family bonding on ethical lines and turn the rejuvenated relationship into a solid foundation of nation-building.

The message of the RSS Chief indeed de-mystified the enigmatic organization, and besides having been loaded with a very direct message of positive, cooperative and synergized nation-building, it certainly was a flawless discourse and music to the ears, answering not only my curiosity, but many reservations and biases of its critics about the objectivity of the RSS approach to socio-political challenges.