You are here: Home / Areas of Study / Governance & Politics / Dividing Punjab and Punjabiat: The dangerous election policy of the Congress
Share 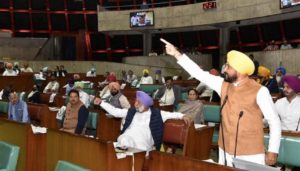 The land of Punjab is going through one of the most unfortunate, sad and dangerous phases in its long and noble history. The current phase is unfortunate because the land and its people are beset with huge problems including lack of employment, faltering economy, dangerously deteriorating environment, drug addiction, an exodus of the youth due to unfettered migration, control of natural assets by the mafia and a host of other problems.

It is a sad phase because the political leaders of the land, who hold the responsibility to resolve its problems, are overwhelmed with their own vested interest in grabbing power by any and every foul means possible. They have no compunction in misrepresenting facts and telling blatant lies if it suits their political purposes. They are unmindful of the repercussions of their hate filled diatribes on the people and least concerned about the huge problems faced by the region, to which they give only lip service in their blame game.

It is a dangerous phase because the utterances of the political leaders have the potential of engineering a divide between the various communities of Punjab that have coexisted peacefully for millennia. More serious is the space that these verbal misadventures are opening up for the very malicious and  inimical enemy sitting across the border to increase its malevolent activities.

The Chief Minister (CM) of the state, Charanjit Singh Channi , during his speech at the 16th session of the 15th Punjab Vidhan Sabha touched the lowest depth of unbecoming and degrading politics. In an attempt to attack the Shiromani Akali Dal (SAD), the CM used the most derogatory and unparliamentary language against the Rashtriya Swayam Sangh (RSS). The CM stated that the Akalis were the gateway through which the RSS managed to make inroads in the state and that the RSS has always been inimical to the interests of Punjab.

The statement does not stand the test of history or empirical evidence since the RSS has been functioning in Punjab for decades before the BJP came into coalition with the SAD. Also, all through the coalition period the RSS, being a social organisation, has been working towards the social unliftment of Punjab independent of the politics of the coalition.

Charanjit Singh Channi failed to clarify as to how and why he felt that the RSS has “always been inimical to the interests of Punjab” thus leaving it as an unsubstantiated and immature remark that does not behove any political leader, let alone the CM of a state.

The complete address of the CM lacked focus and was dependent only on an odious and insufferable diatribe that exposed his frustration and his insecurity. It seems that he has realised the abject failure of his earlier attempts to gain the confidence of the people by giving doles and now wishes to make a bid for power on the basis of the famous “divide and rule” policy.

His poor performance in the State assembly was followed up by yet another dangerous move, wherein, he has announced that the state government will provide Rs 2 lakh compensation to the 83 people who were arrested for violence in Delhi on January 26 this year during farmers’ tractor march.

It is quite evident that Chief Minister Charanjit Channi is misusing his high office in a manner that spells disaster for Punjab and he needs to be checked before it is too late. He needs to be legally challenged for his hate speech against the RSS, the BJP and also the SAD. Further, the Union Government needs to assess the impact of such hate mongering on the communal harmony of the sensitive border state and how it has the potential of escalating into a security issue, both internal and external.

Regarding the compensation to the agitators under arrest, a clarification needs to be taken as to how the tax payers money can be used to compensate such people who are facing criminal charges? In fact, the entire dole packages announced by the CM need to be brought under CAG scrutiny to identify the means by which they can be fructified by the government already reeling under the worst ever financial crisis. 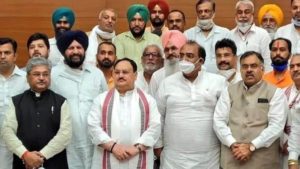 The overall election campaign in the state, by all parties in the fray except the BJP, is based on blame game and stringent statements that are leaving the people insecure and disturbed. In this information mayhem it is only the BJP that is maintaining its dignity. The party has openly admitted its mistake in staying allied with the SAD; it is working hard to give good leadership options in all 117 constituencies and a wholesome election manifesto to the people.

The party has always been in favour of the farmers community, in Punjab and across the country. It understands that there are some segments among the Punjabi farmers who have reservations on the  provisions of the three farm laws. It is sensitive to their problems and has kept open doors for talks to resolve all issues. The party is sure that, sooner than later, the farmers will understand the genuineness of its efforts and the matter will be amicably sorted out.

The BJP is showing the path to a healthy and positive election campaign in the state, it is doing so because its stature as the largest political party in the world does not allow it to opt for low level and divisive politics as the other small and marginal parties are indulging in.

While the regressive election campaigns of the opposition parties may be accepted with a pinch of salt, the dangerous path that the ruling Congress party has adopted cannot be allowed to go uncontested since the repercussions on the security, economy and social fabric of the state can be disastrous.

Engineering of a community divide in the “land of Gurus and Pirs” is something that no Punjabi can tolerate. Any attempt to divide Punjab and Punjabiat is unbearable. The misguided election policy of the ruling party, for which it has made its incumbent CM a scapegoat, cannot be allowed to go on unfettered. It is a directionless meteor that will cause vast damage when it falls. This caution needs to be well understood.