You are here: Home / Areas of Study / Governance & Politics / Government of Punjab must attend to financial crunch of Punjabi University
Share

Educational institutions, such as Universities, provide higher and professional education to millions of students all over the country and are also a source of daily bread to millions of people. The professors, teachers, librarians, clerks, accountants wait for their salaries to plan their kids’ future. Besides, people like housekeeping staff, security staff etc don’t have any other source other than their salaries to make their daily needs. In such conditions, when the source of income dries up the situation becomes critical for the families. Even after working regularly for months, when there comes nothing in hand, it raises worry among people. There arises stress of paying bills and buying bread.

Such worry has arisen among the staff of Punjabi University. For months together, the salaries of a number of staff members have been held up as University is short of funds. According to sources, Punjabi University is under debt/shortage  of 189 crores, currently. This has led to inability to pay salaries, and clear other bills.

Many of us know-how, in the past few months, there has been a number of strikes in the Punjabi University by different unions. The lectures used to be cancelled, the garbage used to be scattered all around and the university campus used to stink, just like its financial stability. The teachers, the sweepers, etc time and again had come down the roads to make their voices heard. 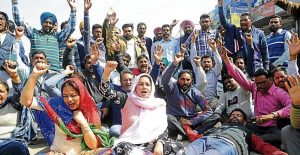 Staff on strike in Punjabi University

After innumerable efforts, finally, the Punjab Government issued a grant of Rs. 90 crores. While it gave relief to professors and other people under the employment of Punjabi University, it seems that the relief would not be for much time. Since the grant has been issued, not a single penny has been allocated to the Punjabi University and everything is on hold, as it had always been. The paper bills are still outstanding, the salaries are still not transferred and pandemic, above all, is adding salt to it.

If such a situation continues with the Punjabi University, the day won’t be far when it will have to be privatized, taking away the educational opportunities from thousands of students. In the whole country, Punjabi University is the only university that has been named after a language, the pride of Punjab. In consonance with its nomenclature, it also preserves the pride of Punjab by making Punjabi language integrative for all courses, it can be taken as an option for study, submission of research papers and writing examinations etc. If privatised, the sanctity of this strength being given to the Punjabi language will be compromised. Besides, the students from economically weaker sections of the society, who are studying because of this government-aided institution will be deprived of education with the privatisation.

Professor Anand has taken over as Vice Chancellor of Punjabi University, he is a well reputed scholar and manager; he needs to be extended full support by the Government so that the University moves on the path of resurrection.

For our uninterrupted education, we request the government to pay heed to our institution.

(Mehak is a student of Punjabi University. She has a blog – www.icyhotwords.com)