You are here: Home / Religious Studies / Guru Arjan Dev Ji: Martyrdom for righteousness that changed the course of History
Share 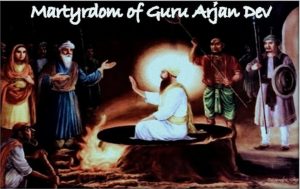 The martyrdom of the fifth master of the Sikhs, Guru Arjan Dev Ji , in the hands of the cruel and bigoted Mughal regime on 13 Jeth 1606 (30 May 1606) falls on 03 June by the western calendar this year. It was a watershed moment not only in the history of the Sikhs but also the whole of India. This victory of righteousness over evil spelled the beginning of the end of the mighty Mughal empire and the rise of the Sikhs as a proud, courageous and upright community.

Guru Arjan Dev Ji, was a visionary scholar, poet, philosopher, composer of music, administrator with excellent organising ability and eminent statesman. He was born at Goindwal Sahib on April 15, 1563. His father was Bhai Jetha Ji (later Guru Ram Das Ji) and mother was Bibi Bhani Ji the daughter of Guru Amar Das Ji. He was the youngest of three siblings. His two elder brothers were Prithi Mal and Maha Dev. He became Guru at the young age of 18 on September 1, 1581.

Guru Arjan Dev Ji brought about many changes in the spiritual and temporal aspects of the Sikh community. The most prominent among these were construction of the holy temple Harimandir Sahib at Amritsar and compilation of the Bani (religious literature) of Sikh masters and other prominent saints, into a single holy scripture – the Adi Granth. These noble contributions of the Guru to led to a rapid evolution of the Sikh community and became the main reason for his imprisonment, torture and martyrdom. Not to ignore, of course, the other reasons, personal and political, that led to the terrible tragedy.

During the reign of Emperor Akbar, the Guru had very good relations with the ruling Mughal monarchy and administration.  Abul Fazal, the court historian of Emperor Akbar writes in Akbar Namah (official history of Emperor Akbar) that the Emperor visited the Guru at Goindwal on 24th November, 1598. He took a round of the commune and also partook Langar (community food) that he was particularly interested in. The Emperor was so impressed that, on the recommendation of the Guru, he ordered to reduce revenue being paid by Punjab.

In the course of his ministry, the Guru cultivated many enemies. Some like his brother Prithi Chand, who had aspired to become Guru and Chandu Shah, a senior noble in the Mughal court, who held a grudge against the Guru due to the broken marriage alliance of his daughter with Hargobind, the son of the Guru, were antagonistic due to personal reasons. Others like Sulhi Khan, a revenue officer in the imperial administration were influenced against the Guru by Prithi Chand and Chandu Shah.

The most significant among the Gurus enemies was the Muslim clergy that felt threatened by his rising religious acceptance among the masses. The chief among these was Sheikh Ahmed Faruqi Sirhindi, a cleric of the all powerful of Naqshbandi order of Sirhind who also held the title of Qayum (Deputy of God). He looked upon himself as a revivalist of the Islamic order in Punjab and wished to destroy the Guru and the Sikh faith.

The original manuscript of the Adi Granth was installed at Harimandir Sahib on 16 August, 1604. Within no time, the protagonists aligned against the Guru  started conniving to use the holy book as an instrument to harm him and the Sikhs. They lodged a complaint with Emperor Akbar that the holy Granth contained passages that were blasphemous to Islam. The Emperor called for the Granth, which was sent to him by the Guru in custody of Bhai Gurdas Ji and Baba Buddha Ji. They were assisted by Mian Mir who was revered by Emperor Akbar as a great Saint. Akbar was satisfied that the contents were, by no means, against any religion let alone Islam. He termed the scripture as a  “volume worthy of reverence.”  and made an offering of 51 gold coins to the Granth.

The death of Emperor Akbar in October, 1605, led to a succession battle between his son Prince Salim and grandson Prince Khusrau. Prince Khusrau travelled towards Lahore and en-route at Taran Taran he met with and received blessings from Guru Arjan Dev Ji. He was defeated by his father and blinded. Prince Salim thus became Emperor and took the name of Jahangir.

For the enemies of Guru Arjan Dev Ji, this was a golden opportunity! They filled the ears of Emperor Jahangir telling him that the Guru had aligned with his enemy. Their ministrations found support from many powerful Muslim clergymen who were getting worried by the growing spiritual influence of the Sikh religion and Guru Arjan Dev Ji on the common people, especially so, after the compilation of the holy Granth and construction of the Harimandir Sahib in Amritsar. 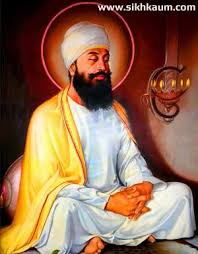 These forces were successful in filling the ears of the Emperor who was already opposed to all those who had been good books of Emperor Akbar and those who has assisted his son in the battle for the throne.

Jahangir was barely in the second year of his reign when he ordered the arrest of Guru Arjan Dev Ji. The justification for the same is contained in his autobiography Tuzuk-e-Jahangiri. He records in the autobiography that Arjan in the garments of sainthood and sanctity had captured many simple minded Hindus as well as ignorant and foolish Muslims who had been persuaded to adopt his ways and manners. Jahangir termed the spirituality of Sikh Guru’s as a shop – an exercise for profit. He further admitted that he had it in mind for some time to “stop to this vain affair or to bring him into the assembly of the people of Islam.”

It becomes quite apparent that the Emperor was interested in converting the Guru to Islam and nipping in the bud the Sikh religion once and for all  and before  meeting the Guru he was already prejudiced against.  By his own admission in his autobiography he used the Guru’s meeting with Prince Khusrau as an excuse to order the arrest. Thus, while the personal enmity of some with the Guru is mostly quoted as the reason behind his arrest and subsequent murder, the actual reason were political and religious insecurities of the Muslim regime and clergy that has, for long, chaffed at the tolerance of Emperor Akbar. Emperor Jahangir would want the world to believe that he considered Guru Arjan Dev Ji to be an insignificant irritant but deep down he was very worried by the hundreds of thousands of the people, both Hindus and Muslims, who had started following the teachings of Sikhism and were crowding into Goindwal and Amritsar.

When the Guru received summons to the court of Jahangir, he realised that he would probably not come back. Accordingly, as per established rituals, he anointed his son Hargobind as the sixth Nanak. He explained to Emperor Jahangir that he had simply extended courtesy to Prince Khusrau since the latter was the grandson of Emperor Akbar who had shown great respect for the Guru while remaining a benefactor of the Sikhs. He emphasised that there was no political intention on his part. The Emperor sadly failed to comprehend the high spiritual standing of the Guru and remained unconvinced about the explanation given. He rendered a death sentence to the Guru on the charge of rebellion. In his autobiography Jahangir records that he ordered his Governor of Lahore, Murtaza Khan, to confiscate all properties of the guru and put him to death. Since there is no historical evidence of such confiscation it was either an idle boast or the Governor was scared of the Sikhs and as such did not go to Goindwal to confiscate the properties

Mian Mir intervened and convinced the Emperor to commute the sentence to a fine of Rupees Two Lakhs plus erasing of a few verses from the Adi Granth which the Emperor had been told were objectionable to the clergy. Guru Arjan Dev Ji refused both the caveats. He said the money of the Sikhs could not be spent for his personal benefit. He was ready to give whatever he possessed personally, but that was not enough. The Sikhs attempted to give the fine but the Guru issued a stern warning that whosoever contributed to pay the fine would not be his Sikh.

On changing the verses in the Adi Granth the Guru was emphatic that not a single word of what has been said by the saints and holy people could be changed especially so since the hymns were not disrespectful to any Hindu incarnation or any Muslim prophet.

The Guru was imprisoned in Lahore Fort and brutally tortured over five days under the supervision of Chandu Shah. On the first day he was given nothing to eat or drink; on the second day he was burnt in a cauldron of boiling water; on the third day he was once again boiled in water while hot sand was poured on his head.  His friend and devotee, Mian Mir, was so devastated by the barbarity that he sought permission to use his supernatural and ecclesiastic powers to destroy the torturers and the entire city of Lahore. The Guru strictly forbade him from doing so since the use of such power goes against the tenets of the Sikh religion. The torture thus continued for the fourth day when the Guru was made to sit on a plate of heated iron while hot sand was poured on his upper body.

The Guru went through the torture in an absolutely calm manner, taking the name of the lord all the time and saying “Tera Kiya Meetha Lage, Nam Padarth Nanak Mange” (your will is sweet nectar for me, I desire only the gift of your name) . On the fifth day he asked for permission to bathe in the River Ravi. The torturers felt that the cold water on his blistered body will cause more pain so they gave permission. As soon as Guru Arjan Dev Ji entered the River, he simply disappeared; his body was nowhere to be seen.

The martyrdom of Guru Arjan Dev Ji became a watershed moment for the Sikhs.  Guru Arjan Dev Ji had also enjoined his son Guru Hargobind to “sit fully armed on his throne and maintain an army to the best of his ability.” Guru Hargobind adhered to the direction and initiated the concept of Miri and Piri, which gave to the Guru both spiritual and temporal powers, he wore two swords to indicate his dual powers and raised an Army from among his followers. The Sikhs decided that they would never again tolerate injustice, insult or oppression.

Like all Sikh Guru’s before him, Guru Arjan Dev Ji taught the message of compassion, love dedication, hard work, the worship of one God the commitment to peace and harmony for all the peoples of the world, but, in his death he created the strongest influence on the Sikh religion.