Guru Ka Langar, a community kitchen also referred to as Langar, is one among the most revered institutions of Sikh religion, philosophy and culture. Based on the concept of “Garib Da Muh, Guru Di Golakh” (The mouth of the poor filled by treasury of the Guru), it calls upon all Sikhs to feed the needy before they feed themselves. 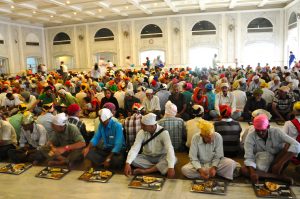 Guru Nanak Dev Ji, when he was quite young, was given a sum of 20 Rupees by his father and told to visit the market to buy items for trade purposes. His father asked him to do good ” Sauda”  (business). It needs to be noted that Rupees Twenty was a very big sum in those days. On his way to the market, the Guru came across a large group of Sadhus (Ascetics) who had been hungry for days. Young Nanak used the entire amount in feeding the Sadhus. When accosted by his very angry father he said that according to him feeding the Sadhus was the best business of all – a Sacha Sauda.  The concept of Langar evolved from then onwards.

Once he settled down in Kartarpur Sahib and established a Sikh Gurdwara (Church), Guru Nanak Dev Ji gave three edicts to his followers – “Naam Japo; Kirat Karo; Vand Chhako (Meditate the name of God, work hard  and share what you eat). Thus, the Guru laid maximum importance on sharing and partaking of food together in the Langar.

The second Sikh master, Guru Angad Dev Ji, paid special attention to the concept of Langar and developed it as an essential part of Sikh community life. The Sevadars (volunteer) of the Langar were told to look upon it as a place of rest and refuge apart from provisioning food; they were told to remain always polite and hospitable to all visitors.

In the establishment of this practice, Guru Angad Dev Ji found unrelenting support from his wife, Mata Khivi Ji. She personally looked after those who ate at the Langar. Her devotion to the cause continued even after Guru Angad Dev Ji passed away, right up to the times of Guru Arjan Dev Ji, when she finally left this world at the ripe old age of 76. Her dedication to the Langar finds mention in the Guru Granth Sahib. 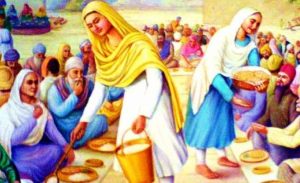 The third Sikh Master, Guru Amar Das Ji, with active support from Mata Khivi Ji strengthened the Langar by converting it into a 24/7 community service and establishing the concept of  “Pangat and Sangat,” that called upon everybody wanting to meet the Guru to first share a meal at the Langar. The idea behind this was to firmly embed the concept of “Raja-Raank Barabari” (The rich and poor are equal in eyes of God Almighty) . One who could not leave behind his ego would not get to meet the Guru.

There are instances of many Kings and even Emperor Akbar having adhered to this practice before meeting the Guru. Emperor Akbar was so impressed that he offered to the Guru revenue from several villages to run the Langar. The Guru respectfully refused saying the divine power would run the service through offerings of devotees.

The tenth Sikh master, Guru Gobind Singh Ji, before passing away at Nanded Sahib, directed his followers to keep the Langar ever open. In the Dasam Granth (scripture of Guru Gobind Singh)  the Guru writes “Deg Tegh Jag Me Dou Chalai,” (The cooking utensil (Langar) and sword will together run the world). Accordingly, the first Sikh coin minted in the eighteenth century carried the Guru’s maxim, “Deg Tegh Fateh” (May Langar and Sword be ever triumphant). Even today, Sikhs seek blessing from the almighty for, “Loh Langar Tapde Rahan,” (May the fires of the Langar remain ever lighted).

The soldiers of the Khalsa Army had a tradition, wherein, once the Langar  was prepared, they would give a call “Guru Ka Langar Tayaar” (The food of the Guru is ready). Even enemies were welcomed to partake the Langar before the Khalsa had it himself, sometimes the Khalsa went hungry since no food was left.

The Sikh Emperor of Punjab,  Maharaja Ranjit Singh, made grants of Jagirs (lands) to Gurdwaras’  for the maintenance of Langar. Similar endowments were created by other Sikh rulers as well. Today, practically every Gurdwara has a Langar supported by the local community.

A Guru Ka Langar has been and continues to be a Sikh tradition in which the community takes great pride and maintains with great devotion.

The famous Sikh litterateur and scholar, Bhai Kahn Singh Nabha has  said that sharing of food and Langar is in integral part of the Sikh culture and values.

In the running of a Langar, no distinction is made among those who wish to contribute materially or by Seva.  The preparation is made by Sevadars who do selfless service free of cost. Only simple, hygienic vegetarian food is served. Those making food do not wear shoes and also cover their heads and mouths. Gurbani (holy words of the Guru) is recited all through the preparation and distribution process. Langar, therefore, is a Prasad (Sacred food).

For partaking the Langar people sit in rows without knowing who the person sitting alongside is, what is his/her caste or creed. Food is served by Sevadars  and utensils are then washed and kept in a designated place by the person who has partaken the holy food. Guru Ka Langar has thus demolished caste barriers and gender prejudices in their entirety.

The institution of Guru Ka Langar instills in the Sikhs a feeling of humbleness and humility. It helps them join together as a community, in line with the dictum that “the family that east together stays together.”  It has ensured that the caste system does not creep into the Sikh religion to play havoc yet again. Langar is also an education in compassion, a true example of the Sikh philosophy of “Sarbat Da Bhala” (May the whole world be prosperous).The dedication towards Langar is such that families book a slot in their Gurdwaras months and years in advance and then get together from across continents to take part in Seva as a together.

In recent years feeding the needy during times of calamity and crisis, has become synonymous with the Langar of the Sikh community. Sikhs  establish Langar in areas that have been afflicted by political turmoil and violence, natural disasters, accidents and such like catastrophes. They also provide food to the needy on a regular basis.

Such has been the visibility of this gracious service that Governments have started requesting for assistance is distribution of food when some critical situation like the recent pandemic of COVID 19 comes up..

The concept of Langar is now being studied as a shining example of social service.

ScoopWhoop, a well known Indian Internet Media Company has carried a special article on Langar titled, “Here’s the Rich History of Langar,” in which it has described the activity as, “the Sikh tradition of selflessly feeding thousands of people.”

Harvard University, in a paper titled, “Langar: The Communal Meal’ says that, “the Langar strengthens the Sikh sense of community. Visitors and guests are readily and warmly included in the great hospitality of the Sikh tradition. It assails the inner core of inequality and symbolises a Sikh’s personal rejection of prejudice.”

The Huffington Post writes – “Langar is the Sikh tradition of serving free meals, and all Canadians are invited. It is so because the millions of Canadians who face food insecurity even in  normal times get to eat in the Sikh Langars.” In countries like Canada that have got a large and prosperous Sikh community, Langars are being served on the streets to help the needy.

Providing food to the needy , many times under very difficult circumstances, is undoubtedly a very humane, courageous and noble act which truly exhibits the spirit and character of a Sikh. That is being done worldwide and receiving appreciation  is something to be proud of. However, to mix philanthropy with the sacred ritual of Guru Ka Langar deems further study and reflection.

Guru Nanak Dev Ji enjoined “Naam Japo; Kirat Karo; Vand Chhako” as a complete entity and not in isolation. The person receiving the food needs to meditate the name of the Almighty  (Naam). Also, a person who shuns work (Kirat) and looks for a free meal does not find favour with God. There is a need to ensure that these caveats are met while serving Langar.

Langar is linked  to the concept of “Pangat and Sangat.” In the present context visiting a Gurdwara and listening to holy Gurbani constitutes Sangat  since the Holy Guru Granth Sahib is a living Guru for the Sikhs. The act of establishing a Langar  should, along with Pangat also cater for Sangat. Therefore, imbibing Gurbani is essential as partaking Langar. This does not seem to be happening during mass delivery on streets.

When food is distributed in streets people simply take it and go away, hence, the very concept of eating together gets negated. There would be many who do not take the name of their own God while taking the food what to talk of  paying homage to the Sikh faith. Some do not even cover their heads while accepting the Langar. The process, thus, loses its spiritual sheen. 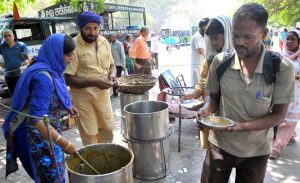 Food served in Guru Ka Langar being sacred cannot be wasted. The last morsel has to be eaten and if something falls out of the plate it too has to be picked up and eaten. When packets are given to people it is not known whether they eat it all or throw it away and thus break Maryada (sanctity) of the holy Prasad .

The Sikh community is now being type cast with the responsibility of “establishing Langar” for the needy.  Governments are shedding their responsibility to Sikhs and people are out for free lunches while being indifferent to the merits of the community. For a community of only 30 Million, taking on such a huge responsibility across the world needs to be given due thought. Should help not be coming in from non-Sikh avenues that can help?

Sikhs are a highly intelligent, financially powerful and vibrant community worldwide.  They need to assume their justified leadership role rather than be looked upon as food service providers. The community has the resources to outsource mundane service activity while personally engaging the intellectual, sociological, ideological and executive management domain. The community should take its rightful place as leaders and not merely service providers.