Hari Singh Nalwa was the Commander-in-Chief at the most turbulent North-West Frontier of Maharaja Ranjit Singh’s Sarkar Khalsa Ji. He took the frontier of the Sarkar Khalsa Jii to the very mouth of the Khyber Pass. 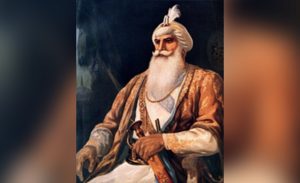 For eight centuries, marauders, who had indulged in looting, plunder, rape, and forcible conversions to Islam had used this route into the subcontinent. In his lifetime, Hari Singh became a terror to the ferocious tribes inhabiting these regions. He successfully thwarted the last foreign invasion into the subcontinent through the Khyber Pass at Jamrud, permanently blocking this route of the invaders.

Hari Singh Nalwa’s performance as an administrator and a military commander in the North West Frontier remains unmatched. Two centuries on, Britain, Pakistan, Russia and America have been unsuccessful in effecting law and order in this region. His spectacular achievements exemplified the tradition established by Guru Gobind Singh.

Hari Singh Nalwa. the great General of the Sarkar Khalsa Ji Empire of Maharaja Ranjit Singh, was born into a Sikh family owing allegiance to the of the Sukerchakia Misl. The family originally came from Majitha, near Amritsar. His grandfather, Hardas Singh, had been killed fighting against Ahmad Shah Durrani in 1762. His father, Gurdial Singh, had taken part in many of the campaigns of the Sukkerchakkias.

Hari Singh was hardly seven years of age when his father died. His mother, Dharam Kaur, had to move to her parental home to live under the care of her brothers. There Hari Singh learned Punjabi and Persian and trained in the manly arts of riding, musketry and swordsmanship. Dharam Kaur returned to Gujranwala when her son was about 13 years old.

In 1804, Hari Singh participated in a recruitment test for service in the Sikh army and so impressed Maharaja Ranjit Singh with his skill at various drills that he was given an appointment as a personal attendant. Not long after, in 1805, he received the commission with a command of 800 horses and foot and was given the title of ‘Sardar’ (Chief).

His rapid promotion from a personal attendant of the Maharaja to a command of 800 horsemen was owed to an incident in which he had cloven with sword the head of a tiger. From that day he came to be known as “Baaghmaar” (The tiger killer), and earned the title of “Nalwa” (one with claws, like that of a tiger).

Hari Singh went on to participate in many glorious victories of the Sikhs before becoming the Commander-in-Chief of the army along the North Western Frontier of the Sikh Kingdom. He was appointed Governor of various provinces and was one of the wealthiest jagirdars of the Kingdom.

Hari Singh was commander of a regiment at the time of the Maharaja’s final attack on Kasur in 1807 and gave evidence of his prowess on the field of battle. He was rewarded with a handsome “Jagir”.

He went on to participate in the Sialkot, Sahival and Khushab expeditions and in four of Ranjit Singh’s seven campaigns against Multan during 1810, 1816, 1817 and then in 1818. He fought in the battle of Attock in 1813 as second-in-command to Diwan Mohkam Chand, and in Kashmir in 1814 and 1819.

Kashmir was occupied and, in 1820, Hari Singh was appointed its governor in succession to Diwan Moti Ram. He restored order in the turbulent areas, and reorganized civil administration. The territory was divided into Parganahs, each under a collector. The habitual criminals were bound down and robbers infesting the forests were suppressed. Construction of forts at Uri and Muzaffarabad and Gurudwaras at Mattan and Baramula was undertaken.

Hari Singh Nalwa received from Maharaja Ranjit Singh a special favor of being allowed to strike a coin in his own name. This coin, known as the Hari Singhi Rupee, remained in circulation in the valley till the closing years of the nineteenth century.

In 1822, he was assigned to the Pathan territory of Hazara on the northwest of the Sikh kingdom, where he remained for fifteen years and settled the disturbed area. The opportunity of consolidating the North West Frontier into a province of Sarkar Khalsa Ji was presented by the relentless efforts of Sardar Hari Singh Nalwa. What he achieved in this region in a span of 15 years with limited resources and in the midst of a turbulent population, was nothing short of a miracle.

Hazara, the crown of the Sindh Sagar Doab, was the most significant of all the territories under his governance. His proceedings in this area present the finest example of his skill as a military commander and as an administrator.

He built a strong fort near Salik Serai, on the left bank of the Dor river and on the road from Hasan Abdal to Abbotabad and named it Harikishangarh, in honour of the Eighth Guru. He also raised a town in the vicinity of the fort, Haripur, which later grew into a busy commercial and trade centre.

From 1827 to 1831, he was engaged in repelling Sayyid Ahmad Barelavi’s fierce campaign against the Sikhs.

In 1834, Hari Singh finally took Peshawar and annexed it to the Sikh dominions. Two years later, he built a fort at Jamrud at the mouth of the Khyber Pass and ealed it once and for all for invaders from the northwest.

In 1831, Hari Singh was deputed to head a diplomatic mission to Lord William Bentinck, Governor-General of British India. The Ropar meeting between Maharaja Ranjit Singh and the head of British India followed soon thereafter. The British desired to persuade Ranjit Singh to open the Indus for trade. Hari Singh Nalwa expressed strong reservations against any such move. The most compelling reason for the Sardar’s skepticism was the scenario visible across the Satluj, namely, the proceedings in British Hindustan. Hari Singh Nalwa clearly understood both the military and trade designs of the British.

The jamrud force was, at that time under command of Sardar Mahan Singh Mirpura. Mirpura requested help from Peshwar where Hari Singh was ailing with fever, yet, he immediately sent some horsemen to Lahore for more reinforcement and along with his soldiers went to Jamrud. Reinforcement under Hari Singh Nalua give a new life to the garrison and attack of Afghanis was repulsed with vigour. Jamrud turned out to be the field of battle this time where a formidable battle was fought.

General Hari Singh Nalua was mortally wounded in the Jamrud battle, he give his last command to his men to not to disclose his death and continue giving enemy a good fight. he further imparted instructions to his soldiers to cover his dead body after lifting it from the ground and placing it on a cot.

The  500 strong Sarkar Khalsa Ji army was grossly outnumbered and yet the Afghans could not dislodge them from fort of Jamrud.

Thus the great Sardar Hari Singh Nalwa, the terror of whose name Afghan mothers used to silence their fretful children attained his martyrdom.

On being asked about the Sikh Kingdom, Mohan Lal informed Abbas Mirza— the Persian Qajar crown prince and military commander during wars with Russia and the Ottoman Empire:
“…if Sardar Hari Singh were to cross the Indus, his highness would soon be glad to make good his retreat to his original government in Tabriz.” (Mohan Lal Kashmiri in Travels in the Panjab, Afghanistan, and Turkistan, etc., 1846 (In service of the East India Company))

“The noblest and the most gallant of the Sikh generals of his time, the very embodiment of honour, chivalry, and courage…” (K.M. Panikkar in The Founding of the Kashmir State, 1930
(Historian, Author, Diplomat and Editor Hindustan Times in 1925)

(With Inputs from Sikhiwiki  and other public sources)