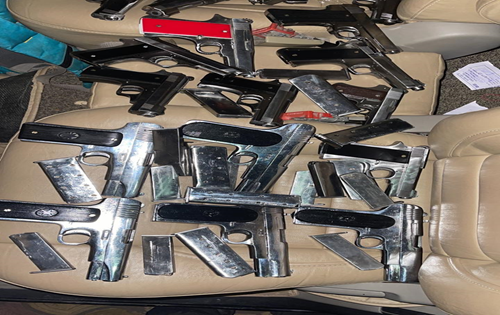 08 June, 2022 – Patiala : Getting an illegal firearm is not that difficult in Punjab. All one needs is some money and clout. What’s more, lax officials and weapon dealers only make the task easier.

With already around 4 lakh licensed weapons in the state and norms getting tougher for new weapons, many are turning to illegal weapons. As a result, the illegal weapon industry is flourishing and arms suppliers are eyeing Punjab.

Information gathered from police officials probing different cases reveal that the illegal weapon manufacturing industry has now shifted from Uttar Pradesh and is now operating through Madhya Pradesh and the quality of semi-automatic weapons has improved a lot. Further, the ones owning illegal weapons do not have to go through the mandatory documentation process or deposit the same during elections.

“From as low as Rs 15,000 for a pistol, high-end weapons are available for gangsters for around Rs 50,000. Further, arms dealers in the state make the job easy as bullets are up for sale illegally by weapon dealers who do not even ask for weapon licences,” said a senior IPS officer, who recently busted one such racket.

“Owning illegal weapons is now becoming easier and we need to check this menace. Illegal weapon is hard to trace after the crime as there is no record of the owner,” said an inspector, probing recent crimes where such weapons were used. “The quality has improved and the semi-automatic pistols bought for Rs 60,000 are steak and good quality bullets make it more lethal,” he said, adding weapon dealers continue to sell bullets illegally for some quick bucks.

Recently, investigations by the police suggested that arms dealers across the country are coming to the state to get illegally imported firearms transferred to their clients. Many prohibited bore (PB) weapons — including 30-star pistols which cannot be legally imported — were recently seized.

A senior IPS officer said the issue had been discussed at the top level and very soon, more efforts would be put in place to check mushrooming of illegal weapon traders. “Further norms for authorised weapon dealers will be made tougher, with more checks,” he said.