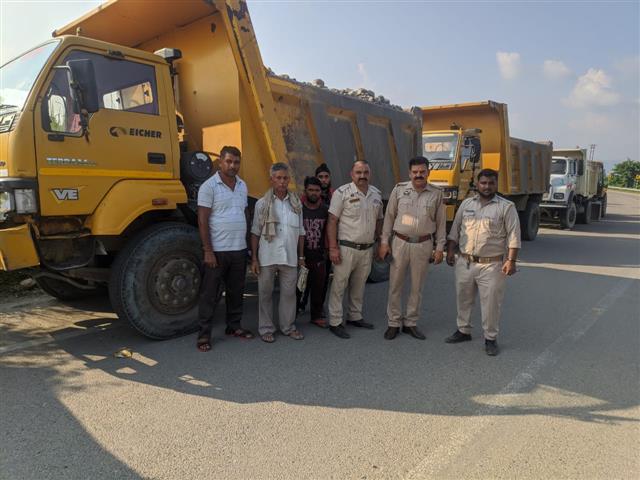 10 September, 2022 – Jammu : With the increase in the presence of mining mafia, mainly those from Punjab, in Jammu division, the administration has sprung into action to curb the illegal activities. Several vehicles bearing Punjab registration numbers have been seized in the recent days, especially in Kathua district adjoining Pathankot.

According to officials, over 45 vehicles involved in illegal mining in Ravi have been seized in Kathua in the recent days and most of them belonged to the neighbouring state.

The problem is rampant also in Jammu district areas where men of local mafia can be seen taking up illegal mining activities. In a recent order, Jammu Deputy Commissioner Avny Lavasa asked the authorities concerned to cancel the registration of the vehicles found involved in such activities. A district-level task force, comprising officials from different departments, has also been constituted to check the illegal mining.

On September 2, a team of the Department of Geology and Mining seized 2,484 metric tonnes (MTs) of illegally excavated sand from Billawar area in Kathua district. The sand was excavated from Ujh river. The mafia had stocked 13 dumps of sand in different areas. As per officials, the sand was supposed to be sold at higher rates.

On August 30, authorities seized an excavator and three vehicles, belonging to some Punjab mafia, which were found excavating sand in Sahar Khad area in Kathua.

Kathua Mining Officer Rajinder Singh said the vehicles were supposed to take the excavated sand to Pathankot in Punjab where the cost of sand and gravel is very high these days. As mining is banned in many parts of Punjab during monsoon, mafia has been taking the route of Kathua to excavate minerals and sell them at exorbitant rates in Punjab, say officials.

In July, a penalty of Rs 12 lakh was imposed on the owners of heavy machinery and vehicles in Kathua that were being operated by Punjab-based mafia. A heavy chain machine and a dumper were seized from the spot along the Ravi river. Two drivers along with dumpers succeeded to flee.

Sources in Kathua say that the action so far appear to be minuscule as a lot of vehicles can be seen in these areas involved in illegal mining during evening hours.