You are here: Home / Agriculture / India will attain self sufficiency in production of Urea
Share 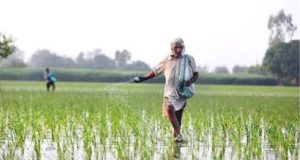 Union Minister for Chemicals and Fertilisers, Mansukh Mandaviya, has recently stated that India will not need to import Urea after 2025 since, by then, domestic production of conventional Urea and Nano liquid urea will sufficient to meet the country’s demand. Presently the country’s domestic Urea production is around 26 million tonnes while demand is around 35 million tonnes, the gap is met through imports.

This optimism rests on the commissioning of six new conventional Urea plants, each with an annual production capacity of about 1.3 million tonnes. Of these, the Barauni and Sindri plants will be commissioned by September this year, and the others in the next three-four years. Once all these public sector plants start functioning, India’s domestic urea output will rise by 7.8-8 million tonnes, hence, dependence on imports will automatically go down to 1-3 million tonnes a year as against the current 7-9 million tonnes.

A big leap in self-sufficiency has been given by bottle based liquid Nano Urea. Commercial production had started on August 1, 2021, from the Kalol unit in Gujarat. Since the launch of Nano urea, the government has dispatched some 39 million bottles to be sold at outlets of IFFCO and RCF. Around 28.7 million bottles have been sold. By 2025, around 440 million bottles of 500 ml Nano urea will be produced. This will be equivalent to around 20 million tonnes normal Urea. Nano Urea will also lead to reduction in soil, water and air pollution, which happens due to the overuse of chemical fertilisers.

Seven more Nano urea plants are being set up by IFFCO as well as two state-owned firms RCF and NFL. IFFCO has transferred Nano urea technology to these two public sector undertakings free of cost.

Nano urea will lead to an increase in farmer income. This would be on account of reduction in input cost, higher crop yield and better prices, in view of better quality crops. It is estimated that an average Rs 4,000 per acre increase is possible in farmer income by using Nano urea.

The aforementioned projects will lead to saving of foreign exchange to the tune of Rs 40,000 crore per annum.  “This will not only make us almost self-sufficient in urea but also lower the requirement of floating open global tenders to import urea each year, which sometimes leads to cartelisation among global players to India’s detriment,” a senior industry official said.

The Centre provides urea at a highly subsidised rate of Rs 266 per bag (of 45 kg) to farmers. It has to bear a subsidy of over Rs 2,700 per bag. Urea is used in various industries such as resin/glue, plywood, crockery, moulding powder, cattle feed, dairy and industrial mining explosives. The agriculture-grade urea is Neem-coated while technical-grade urea is not. Sadly, the Neem-coating is removed through some chemical process and then the urea is used for industrial purposes.

There is an annual requirement of around 13-14 lakh tonnes of technical-grade urea for industrial usage, of which only 1.5 lakh tonnes are produced in the country. The industry imports only 2 lakh tonnes, as against the required level of more than 10 lakh tonnes, the remainder requirement is offset with leakage of Agriculture urea.

The Centre has, therefore, launched a nationwide crackdown to curb diversion of about 10 lakh tonnes of agriculture-grade Urea per year for industrial uses that results in subsidy leakage of around Rs 6,000 crore. Some quantity goes to neighbouring countries. The Department of Fertilisers has constituted a special team of dedicated officers — ‘Fertiliser Flying Squad’ — for surprise inspections of units involved in diversion, black marketing, hoarding and supply of sub-standard quality of fertiliser.

On May 20, a multi-pronged crackdown was launched on diversion of fertilisers in 52 units across six states. “Unauthorised urea stock of 7400 bags (worth Rs 2.2 crore) were seized. Out of 59 samples of suspected urea collected from these units, 22 were found to have Neem oil content so far,” said an official.

In the near future the international cost of Urea is expected to increase, but, the Centre is not lokely to pass on the burden of rise in global prices to farmers.