You are here: Home / Areas of Study / Governance & Politics / Is Punjab heading towards Anarchy?
Share

Aam Aadmi Party (AAP), under Sh. Arvind Kejriwal and Sh.Bhagwant Mann got a massive mandate to rule Punjab in the recently held Vidhan Sabha elections of the state. The mandate went their way since the people of Punjab are tired of misrule in the state since 1983. People opted for a change from the traditional parties that have ruled the state in turns over many decades.

Results were declared on 10th of March, the new chief minister is yet to take oath and already there are serious issues coming up as an ominous harbinger of things to come. The goons of the AAp party that is chosen to rule are going about assaulting and torturing people belonging to other parties and ideologies. AAP MLAs have started checking police stations and Tehsils and harassing officials without following the due process of law.

In an instance of terrible misuse of power at the highest level, Punjab or Pepsu Roadways buses were used to ferry crowds to Amritsar for a function organised to show the party supremo, Arvind Kejriwal, as a hero. Due to this sudden demand, passengers were left stranded in many bus stands. This was followed by forcible acquisition of 40 acres of land for the oath taking ceremony in Khatkar Kalan. The land had a standing wheat crop that was summarily destroyed. Criticism has compelled the party to deposit money in government treasury even as the State exchequer is funding the oath ceremony publicity. The misdemeanours have left a deep impact on the psyche of the people.

It is learnt from reliable sources that the mining mafia is likely to give Creta cars to the party which implies that the incoming government is unlikely to deal with illegal mining with a firm hand.

The daylight murder of a Sandeep Nangal, an international Kabaddi player in Punjab and escape of criminals is before the public, Administration is not taking action to nab the culprits since the Congress government has stopped functioning and the AAP government has yet not taken over. The party leadership is busy building the image of its supremo, Arvind Kejriwal, for elections in other states like Himachal Pradesh and Gujarat in times to come. 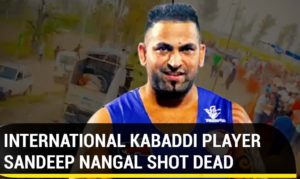 Personal honesty of a senior leader is not enough to ensure good administration. The bigger need is to generate the strength and will power to govern effectively. A leader who has to constantly look over his shoulder for directions cannot be expected to deliver. India has witnessed this at the level of the Union Government once. Something similar seems to be happening in Punjab now.

The foregoing break down in law and order, blatant misuse of power and disregard for constitutional process is compelling intellectuals in the state to think – is Punjab is heading towards anarchy?

While saluting the verdict of the public and congratulating AAP for its victory, I wish to request and caution the Chief Minister designate, Sh Bhagwant Mann, to follow the constitution and the rule book and save Punjab from lawlessness. I do so since it is my moral duty as a Punjabi to watch the interest of my State .