You are here: Home / Areas of Study / National Perspectives / J&K: Proposal of Delimitation Commission is noble and justified
Share 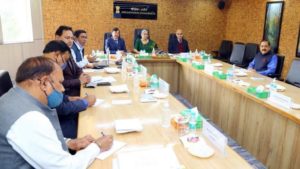 Meeting of delimitation commission in J&K

On March 6, 2020, the Union government set up a Delimitation Commission headed by a retired Supreme Court Judge, Ranjana Prakash Desai. Among its many responsibilities was the mandate to carry out a long pending delimitation exercise in the Union Territory (UT) of Jammu and Kashmir. In accordance with Jammu and Kashmir Reorganisation Bill, 2019, the number of Assembly seats in J&K were to be increased from 107 to 114. This was to cater for West Pakistan refugees and others who were earlier, under Article 35A, denied domicile and the right to vote and would now form a part of the electorate.

The task given to the Commission posed a unique set of challenges, more so since it was known that a powerful political lobby of the erstwhile state, now a UT, would oppose it tooth and nail. It was so because the Kashmiri leadership is unwilling to right a historical wrong perpetrated on the people of the Jammu region.

Delimitation of legislative assembly constituencies in J&K was done last in 1995 on the basis of the Representation of People’s Act, 1957, a law enacted by the state legislature. As such, central laws and caveats have never been applied in the carving out of the constituencies. The end result has been a constitutionally inappropriate  distribution of seats that led to the political marginalisation of the Jammu region for seven decades.

The present delimitation commission is conducting its brief strictly on the basis of the Representation of People’s Act (RPA), 1951 and is attempting to ensure a balance within the UT that has different geographical domains as well as population centres comprising different castes, communities and even cultures.

Now, the second draft delimitation working paper has been shared by the Commission with the five associate members (J&K Lok Sabha MPs from the National Conference and the BJP). The commission asked them to respond to the draft proposal before February 14. 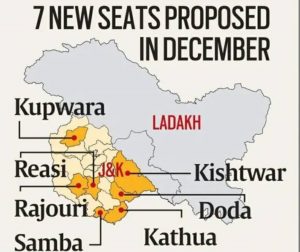 The proposal is to redraw several assembly segments in the UT in a manner that would allocate six additional seats to the Jammu division and one to the Kashmir division. One additional constituency is proposed in the districts of Kathua, Samba, Rajouri, Reasi, Doda and Kishtwar in Jammu division, and Kupwara in the Kashmir Valley. Changes are also proposed in the Baramulla, Kupwara, Srinagar, Kulgam and Anantnag districts of the Kashmir division by realigning of constituencies. So far as the Lok Sabha constituencies are concerned, the twin districts of Poonch and Rajouri have been added to the Ananatnag Constituency.

For the first time, the Commission has proposed reserving nine seats for Scheduled Tribes (STs) on the basis of population. Seven seats are proposed for the Scheduled Castes (SCs). An additional 24 seats are proposed to be reserved for Pakistan Occupied Jammu and Kashmir (POJK). Once these proposed additions are effected, the total number of Assembly constituencies in the UT of J&K will rise to 90. Jammu will go up from 37 to 43 and Kashmir will go up from 46 to 47.

As was expected the proposal has been rejected by the National Conference on the premise of it being “unconstitutional.” The party has further stated that the commission has not incorporated its suggestions made on the earlier draft proposal. Mehbooba Mufti  of the PDP has gone a step further to say that, “The delimitation exercise is done to further the BJP agenda and has shown no regard to law and constitution.” The recommendations or objections of associate members, however, are not binding on the Commission.

The objections being raised are quite mundane in nature. For example, the merger of Poonch and Rajouri with Anantnag as a parliamentary constituency is contested on grounds of there being less connectivity since the Mughal road stays closed during winters. A positive attitude would entail construction of all weather connectivity which is definitely a possibility considering the leaps made by the country in creation of road infrastructure.

Since the PDP has chosen to put the blame specifically on the BJP the party has also responded with alacrity. “After the delimitation, the National Conference and People’s Democratic Party are shouting because their fiefdom and their dynastic politics is over,” said Yudhvir Sethi, the vice-president of the BJP in Jammu and Kashmir.

Politicians from the Kashmir region are trying hard to raise temperatures in the UT in order to keep their hold over the region to whatever extent possible. As the opposition from the Kashmiri leadership intensifies, the time tested methodology of getting caste in the equation and speaking of the centre attempting to create a communal drive is expected to gain momentum. There will be talk of the redrawing of constituencies in J&K becoming  another 1987 moment in Kashmir. It will also be said that once the Governor’s rule is removed and the UT legislature is in place, the dispensation will be reversed. All of the above constitutes petty politics that will be played by a political dispensation that stands rejected by the people.

The security forces have contained terrorism and created a situation where normal activity can be carried out in the entire UT. The people are moving out to their work and business without fear and intimidation, they are more interested in the influx of capital and infrastructure leading to better economic opportunities than in the petty politics of the Kashmir based political parties.

The overall impression is that the Delimitation Commission, by bringing about a much needed balance in the electoral constituencies of the UT, is correcting a wrong that had been perpetrated by devious means seven decades back. The artificial shackles created by repressive unconstitutional means are being replaced with more inclusive democratic norms. Overall, the work of the commission is noble and justified. There is a high expectancy of the proposals of the commission being accepted by the people even as those with vested interests continue with the opposition.