16 November, 2021 – New Delhi : Closed in March 2020 in the wake of the Covid pandemic, the Kartarpur Corridor linking Dera Baba Nanak in India’s Gurdaspur to Gurdwara Darbar Saheb in Narowal, Pakistan, will reopen for pilgrims on Wednesday.

Union Home Minister Amit Shah made the announcement on Twitter on Tuesday saying, “In a major decision, that will benefit large numbers of Sikh pilgrims, PM Narendra Modi’s government has decided to reopen the Kartarpur Sahib Corridor from tomorrow, November 17. This decision reflects the immense reverence of Modi govt towards Shri Guru Nanak Dev Ji and our Sikh community.” 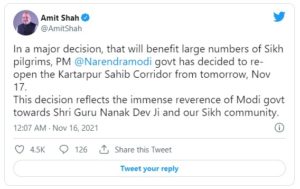 The Home Minister said the nation is all set to celebrate the Parkash Utsav of Guru Nanak on November 19.

“I am sure that PM Modi government’s decision to reopen the Kartarpur Sahib corridor will further boost the joy and happiness across the country.”

Sources said the Prime Minister’s Office was in touch with the Ministry of External Affairs and the Ministry of Home to finalise the modalities after serial representations to the government to reopen the corridor.

The announcement of reopening follows three meetings of BJP leaders from Punjab, Delhi and Jammu and Kashmir with President Ram Nath Kovind, Prime Minister and home minister, seeking that the corridor be reopened.

The reopening comes at a time when daily Covid cases have been stabilising and active Covid cases are at a 10-month low.

The Home Ministry has, meanwhile, assessed the security scenario before giving the go-ahead to the corridor reopening. 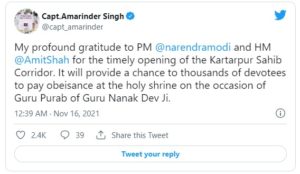 An agreement between India and Pakistan for the facilitation of pilgrims to visit Gurdwara Darbar Sahib, Kartarpur, Pakistan, was signed on October 24, 2019, in order to fulfil the long-standing demand of the pilgrims to have easy and smooth access to the holy gurdwara and to operationalise the corridor in time for the 550th birth anniversary of Guru Nanak.

The Agreement provides for visa-free travel of Indian pilgrims as well as Overseas Citizen of India (OCI) cardholders, from India to the holy gurdwara in Pakistan on a daily basis, throughout the year. The corridor connects Gurdwara Darbar Sahib in Pakistan with Dera Baba Nanak in Gurdaspur.