In a poll conducted by BBC World Histories magazine, Maharaja Ranjit Singh, the Lion of Punjab and founder of the mighty Sikh Empire in the 19th Century, has been voted the greatest leader in world history by 38 per cent of the more than 5,000 readers of the magazine. 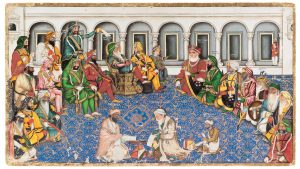 Nominations for the poll were sought from global historians, including Matthew Lockwood, Rana Mitter, Margaret MacMillan and Gus Casely-Hayford, who selected their “greatest leader” from among those who, according to them, exercised power and had a positive impact on humanity.

The magazine then asked its readers to vote for the greatest leader from the names that had been nominated. They had to choose a leader who had “exercised power and had a positive impact on humanity and to explore their achievements and legacy.”

Maharaja Ranjit Singh was voted as the greatest leader in world history by 38 per cent readers of the Magazine. The second place with 25 percent of the votes went to African independence fighter Amílcar Cabral who is credited with uniting over a million Guineans to free themselves from Portuguese occupation. British Prime Minister Winston Churchill is in the third position with 7 per cent of the vote for his contributions to Britain during World War II. American President Abraham Lincoln was voted fourth.

Maharaja Ranjit Singh was nominated by historian Matthew Lockwood, Assistant Professor of History at the University of Alabama, for establishing a “modern empire of toleration.”

Matthew Lockwood described Maharaja Ranjit Singh as a modernising and uniting force, whose reign “marked a golden age for Punjab and northwest India.”

A Sikh warrior, an empire builder, a contemporary of Napoleon and now voted the greatest leader in world history in a poll by BBC World Histories Magazine, Maharaja Ranjit Singh was one of the most dramatic figures of the 19th century and became a legend in his lifetime.

Exploring the life and achievements of Maharaja Ranjit Singh, Lockwood noted, “On 27 June 2019, a statue was unveiled in Lahore Fort in Pakistan. The equestrian sculpture had been commissioned to mark the 180th anniversary of the death of one of Lahore’s most famous and significant historical figures. But even more than that, in a region engulfed with ethnic and religious strife, in an era scarred by rising religious fundamentalism and growing tension between India and Pakistan, the statue is a symbol of a previous age of toleration and stability, and the near-mythical ruler who presided over it: Maharaja Ranjit Singh.”

“Ranjit Singh had come of age in a similarly fractious age. When he was born in Gujranwala just north of Lahore in November 1780, the once-mighty Mughal Empire, which had dominated the Indian subcontinent for centuries was in the last stages of terminal decline. As its power dimmed across the 18th century, a host of local and regional powers emerged to fill the vacuum. In the south the Sultans of Mysore and the Nizams of Hyderabad carved out independent kingdoms. In the basin of the river Ganges, the Nawabs of Oudh and Bengal struggled with the Maratha Confederacy to fill the gap left by the Mughal retreat,” Lockwood further noted.

“Warfare was central to Ranjit Singh’s upbringing, the name Ranjit, meaning ‘victor in battle’, was given to him as a child to commemorate his father’s victory over a regional rival. But when his father died in 1792, the 12-year-old heir to Sukerchakia Misl, small in stature, with left eye blinded and his face scarred by smallpox, was an unlikely candidate for the founder of an Empire,” Lockwood pointed out.

“To secure the internal stability of the Empire, Ranjit Singh married women from the ruling families of the region. Plural marriage was common practice among Punjabi elites at the time, a symbol of status but also a crucial means of cementing alliances,” Lockwood observed.

“In a religiously diverse region, however, military might alone could not have ensured stability. Ranjit Singh thus struck a careful balance between his role as a faithful Sikh ruler and his desire to act as friend and protector of his empire’s Muslim and Hindu people. He thus embarked on a public campaign to restore Sikh temples, most notably rebuilding Harmandir Sahib, the Golden Temple, at Amritsar in marble (1809) and gold (1830)  while also donating a tonne of gold to plate the Hindu Kashi Vishwanath temple to Lord Shiva in Varanasi. He patronised Hindu temples, Muslim mosques, and Sufi shrines, and in a nod to Hindu sensibilities banned the slaughter of cows. In his lands, forced conversions were largely unheard of, and even his Muslim and Hindu wives were freely allowed to practice their faiths. On a few occasions he did convert mosques to other use, Lahore’s Moti Masjid (Pearl Mosque) became Moti Mandir (Pearl Temple) but he tried, with some success, to limit the destruction of conquered religious sites. He was a conqueror, even a unifier, not a crusader,” Lockwood stated.

“A French traveller compared him to Napoleon in miniature, while other observers praised him as a “military genius” and his empire as “the most wonderful object in the whole world.” The British agreed, marvelling at the Sikh empire, the “Napoleonic suddenness of its rise” and “the brilliancy of its success” Lockwood noted.

The magazine which conducted the poll rightly notes, “While the Indian subcontinent was engulfed with the imperial competition, religious strife and wars of conquest, Maharaja Ranjit Singh was, almost uniquely, a unifier – a force for stability, prosperity and tolerance.” Perhaps that is why the ‘Lion of Punjab’ is relevant to our times.