You are here: Home / Areas of Study / National Perspectives / Nation first: Honour excellence over politics, say ‘no’ to Reservations
Share

As India positions itself as an emerging superpower of 21st Century, we need to go for excellence in all spheres and not mediocrity. It should be ensured that merit is the prime yardstick in any selection. This can be surely done only if we discourage caste based reservation system. This year, we are celebrating 75 years of Independence. If in 75 years, we are not able to raise the standards of socially backward castes,  it will never happen.

Initially, reservations were made for 10 years but the vote bank politics has prohibited all parties to avoid abolition of caste based reservations. It’s rightly said- “When you can’t scrap the reservations, get yourself included in the privileged class.” Therefore, the clamour for more and more castes to be included in reserved classes. The General Category wants to go into OBC and OBC wants to go into SC/ST and hence the race continues for down-grading of social status to curry  favours  of reserved classes.   The students of General Category today ask- What’s my fault if I am born in an upper class family? OR, why should I be penalized today, if somebody’s forefathers were oppressed many generations earlier??

The caste system was very much present in the 19th and 20th Century. At that time, the thought process was that if some quota is provided to such oppressed and underprivileged classes, their status and economic condition will be lifted and they will be able to join the mainstream after a few years.  The genesis of reservation goes back to pre-Independence era.  Even prior to India’s independence and the provision of reservations in the Constitution, several princely states had  granted special status and quotas in various forms to lower castes. The Government of India Act, 1935   provided reservation for SC/ST in the Provincial Assemblies. Reservation in its current form owes its origin to the Viceroy’s Order of 1943 that provided for reservations in government jobs and education.

If you really see, Reservation was a promise made to the marginalized on the eve of independence and the philosophy of reservation is embedded in the annihilation of the caste system. However, the caste system has not been eradicated till now. The few privileged and affluent people whose status got lifted by the reservation system formed the ‘creamy layer’ of these backward castes.  They started enjoying all the perks of this reservation/quota for   entry into education, jobs and promotions, while the masses continued to remain underprivileged and poor.   They had influence over the vote bank of their respective castes and hence all Governments closed their eyes to this privileged creamy layer  within SC/ST and OBC classes. Hence, the reservations continued to swell with time.

The Scheduled Castes (SC) and Scheduled Tribes (ST) were able to avail reservations soon after independence; it took a little longer for the Other Backward Classes (OBCs).  With a constitutional amendment in 1995, reservations were made available to SCs and STs in matters of promotions, as well.

The 93rd Constitutional Amendment Act which came into force in 2006 paved the way for reservations in private institutions. 15 % and 7.5 % of positions in Central Government jobs are reserved for SCs and STs respectively, while 27 percent are for OBCs. The same percentage also applies to seats in central education Institutions. Thanks to Supreme Court of India, which has ruled that all forms of reservations should not exceed 50% of the total vacancies.  However, the judgment also pointed out that while 50 percent shall be the rule, there could be certain extraordinary situations that call for relaxation of the rule. All political parties are now trying to exploit this by promising reservations to more and more castes and securing votes.

Several groups including the Patidars in Gujarat, Jats in Haryana, Gurjars in Rajasthan and Marathas in Maharashtra have in the recent past violently agitated for their inclusion in the state reservation quotas. When they couldn’t fight the reservation system, upper castes started a   growing demand for some reservations based on economic condition irrespective of  castes.  Not to annoy the upper caste vote-bank, various political parties started the ‘appeasement of vote bank’ policies. The nation be damned.  Reservation for so-called upper castes in the name of EWS  (Economically Weaker Section)  was attempted first by the Congress government in 1991 and then finally, the  BJP government did it  in 2019.

On January 13 2019, the President gave his approval to 10% reservation for EWS  in higher educational institutions   as well as in initial appointments in government services. In popular parlance, this is being bandied as ‘Upper-Caste Reservation.’ With the addition of 10 percent for EWS, as per the latest Constitutional Amendment Bill, the percentage of reservations in central government services and educational institutions will go up to 59.5%. 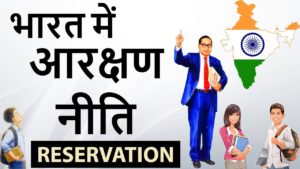 The continuation of caste based reservations even after 75 years is serving no purpose to the national growth and improvement of the society. The current policy fails to achieve its purpose of giving equal opportunity to everyone, because they act as psychological crutches to the backward castes, thus weakening them.  In real terms, there is no abolishment of caste system. Instead, the disparity increases because of antagonistic attitudes on both sides.   The members of lower classes still feel that they do not have sufficient representation and the members of upper classes feel that in spite of their merits, they do not have the same opportunities.

The caste system and discrimination has persisted in spite of the reserved quotas. Reverse discrimination is widespread and everyone wants to take total advantage of the existing system. These candidates were not meritorious enough to make it to college, so were given admission on the basis of their being SC/ST/OBC; even a college admission did not make them any smarter and so they needed a jobs-quota after that. And now, in the case of SC/ST, it appears that getting a job through a quota didn’t make them any smarter or improve their skills, which is why the government continues to push for quotas for promotions. The reservation   is   promoting mediocrity in the Indian society, polity, and governance today.

If the nation wants to progress well and emerge as a fast developing economy, we need to recognize and promote the best. In our pursuit of excellence in all spheres, merit should be the only criteria for admissions, jobs and promotions.

The Supreme Court   ruled against the idea of “a communal reservation”, saying the policy of quota is not intended at denying meritorious candidates job opportunities even if they belong to reserved categories. The Supreme Court  Bench has also said that merit and not reservation should be the sole criteria in filling up positions in certain super specialty jobs. In such situations, it may not be advisable to provide for reservations. Unfortunately, there is no political party/organization that is interested in doing away with reservations; on the contrary, they are trying to perpetuate it further.

We should provide financial assistance and ample opportunities to study, grow and elevate the social status of the all underprivileged classes. It’s prudent to highlight that it should not be based on religion, caste or creed which are decided by birth. It is recommended that special facilities and help should be given to poor children of all castes (even upper castes) or religions, to ensure them a level playing field.  However, the merit should not be compromised for   selection into educational institutions, jobs and promotions. Then only   true secular values of our country and excellence in governance will  be projected,   in the world.

If this is not done, the people who are adversely affected by reservations will breed contempt for India as a State, although they will love India as their country. I fear that frustrated at being constantly deprived, in spite of performing better than those benefited by reservations, upper caste groups may start protests like the days of Mandal Commission implementation. It may well be impossible for all   to thwart such a demand.   Such a policy of favoring persons on the basis of their birth will surely pave the way for deep inter-caste hatred and balkanization of India, which we need to avoid, at all costs.  Prime Minister Narendra Modi is known to take bold decisions in the National interest,  like abrogation of Article 370. Keeping the ‘Nation First’ Policy in mind , I am sure all political parties will rise above petty vote-bank politics and say ‘NO’ to caste based reservations, very soon.

(The author can be contacted at www.majgencpsingh.com)