You are here: Home / Areas of Study / International Perspectives / New chief of the Pakistan Army : Implication and Impact on India
Share 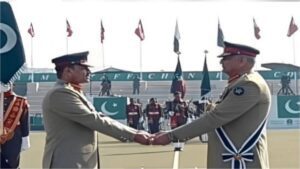 On November 24, the President of Pakistan, Arif Alvi, promoted Lt General Asim Munir Ahmed, to the rank of General and appointed him as Chief of Army Staff (COAS) of the Pakistan Army. The appointment, for once, has been made on the grounds of seniority, which mostly does not happen in Pakistan. Nevertheless, the selection process generated intense controversy and political maneuvering since there were many like former prime minister, Imran Khan, who opposed the same wholeheartedly.

Now that the General is in the hot seat, all who have been sidelined will take their piece of the financial cake in terms of land allotments, chairmanships etc and fade away.  A new Junta of serving Lt Generals (Corps Commanders and top PSOs) will be put in place to carry the job forward. General Munir will assume the role of being de-facto ruler of Pakistan.

The build up to the appointment generated a lot of debate, speculation and excitement within Indian strategic circles. One cannot fathom the reason since all Pakistani Army Officers follow a set pattern of thought and policy.

The military officer cadre of Pakistan is indoctrinated towards adopting an anti-India posture and towards pursuing a fundamentalist interpretation of Sunni Islam. The perception of the Army being not only the superior but also the only establishment that can ensure the survival of the Nation is fully ingrained in the collective psyche of the officers. Takeover of Jammu and Kashmir is an imperative strategic objective for the military.

They have no qualms in nurturing a militia of radicalised (mullah) warlords whom they look upon as strategic assets in controlling their neighborhood, be it India, Afghanistan, Iran, Xinjiang and even the Central Asian Republics, regardless of the harm that these organisations cause to the internal law and order situation of the country.

The officers invariably look towards all Provinces other than Punjab as virtual colonies that have to be kept suppressed by all means, including  overwhelming use of military force. Maintenance of the military is paramount despite the depleted financial condition of the country. Finally, Pakistan Army officers have taken corruption to a new high by gathering for themselves unimaginable assets and cash during their tenures.

The  Pakistan army chiefs climb through this indoctrinated training and as such there is not much difference in the policies that they pursue. General Ashfaq Kiyani, General Raheel Sharif and General Qamar Bajwa who held the top post on culmination of the General Pervez Musharraf led dictatorship were ideologically on the same platform. The situations varied but the policy, more or less, remained the same.

General Munir became a Hafiz Quran (a person who can recite the complete holy book) when he was a Colonel.  He is also a five times Namazi and goes to Haj almost every year. He is, as such, the best prepared  for the highest office (even better than his predecessors) for which such accomplishments are looked upon as an asset.  General Munir is also the first Army Chief who has held the appointment of Director General Military Intelligence (DGMI); Director General Inter Services Intelligence (DGISI) and served in Saudi Arabia (the cradle of fundamentalist Sunni Islam). These attributes indicate that he is unlikely to deviate from the hard-line, pro-army, anti-India stand that is the tradition in the Pakistan military establishment. That he will follow a fundamentalist religious posture is quite obvious. 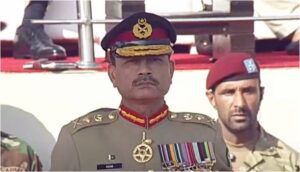 It, therefore, comes as no surprise that he chose to visit Pakistan Occupied Kashmir (POK) immediately after taking over the mantle of Army Chief and made a particularly belligerent statement against India.  “We have noticed highly irresponsible statements from the Indian leadership on G-B & AJK recently. Let me make it categorically clear, Pakistan’s armed forces are ever ready, not only to defend every inch of our motherland, but to take the fight back to the enemy, if ever, war is imposed on us,” he said. “Any misconception resulting into a misadventure will always be met with the full might of our armed forces backed by a resilient nation,” he added. Not much can be left to the imagination so far as his India policy is concerned.

Much as the new chief would like to play the gallant soldier and wage war against India, he is constrained by a precarious domestic situation. His biggest enemy Imran Khan, who is no push-over, is crying foul over the appointment and people are listening to him, Removal of Munir will become a necessity for Imran Khan should he come back to power again.

With the proverbial Damocles’ sword hanging over his head, General Munir will be compelled to take sides in the political domain. He will, therefore, put in all effort to strengthen the prospects of PML-Nawaz (PLM-N). The political scenario in Pakistan is bound to become very ugly indeed and Munir will find himself in the centre of the violent cesspool. Steering his organisation through these murky waters will pose a big challenge for him.

He will also have to shield his predecessor General Qamar Bajwa whose massive wealth accumulated through corrupt practices is the talk of the town. Such an assistance will go against the “straight as an arrow” persona that Munir would have liked to build for himself.

Then there are sensitive issues like relations with the US and China, management of  the China Pakistan Economic Corridor (CPEC), the precarious financial situation of the country and the delicate relationship with the all powerful militant groups to contend with. There is no money available to even maintain the force that he now heads let along modernise it, he will be compelled to move from country to country, hat in hand, looking for military aid. All such matters will impinge upon the ability of the General to play his primary role as Chief of the Pakistan army. However, there is no chance of the General allowing the stranglehold of the Army over the nation to loosen even a bit.

General Munir would well understand that the best way to prove his own potency and power of the Army under him is to create a situation of violence in India through a terrorist strike or some other similar activity, this is a norm that every Pakistani chief follows.

As far as India is concerned, as things stand, the ceasefire is holding on the Line of Control, but Pakistan’s attempt to smuggle drugs, weapons and warlike stores into India through Drones has seen a marked increase. General Munir may not fiddle with the ceasefire protocol in the short term but there is every chance of his pursuing his hard line approach towards India by giving a boost to the proxy war and by resurrecting the thousand cuts policy. His stint in ISI and MI will help him crystallise such a strategy. India, therefore, needs to remain vigilant against the enhancement of infiltration, use of Drones to feed drugs, arms, ammunition etc.

It would be best for India to remain ready to counter any other misadventure that Pakistan may indulge in. To remain passive and indulgent towards the neighbouring country just because it is going through an acute internal crisis could prove to be dangerous. Its instability is, in itself, a big cause for worry since it has always had repercussions not only for India but the entire region. However, should the new chief of the Pakistan army, with his actions, display an intention of improving relations with India, then a favourable though cautious response would not be out of place.