You are here: Home / News / PM Narendra Modi hosts prominent Sikhs; they hail him as a ‘Sikh at heart’
Share 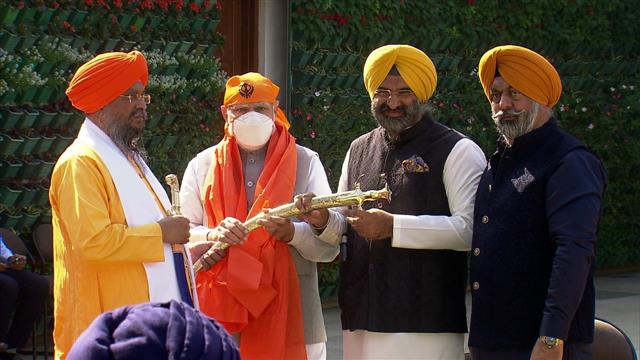 18 February, 2022 – New Delhi : Prime Minister Narendra Modi on Friday hosted prominent Sikhs from across India at his 7 Lok Kalyan Marg residence here and hailed the contributions of the community to national integrity and prosperity.

After the meeting, the Sikh leaders described the prime minister as a “Sikh at heart” and listed his contributions to the faith including the opening of the Kartarpur Corridor.

The meeting came on the last day of campaigning for the February 20 Punjab elections.

Ravinder Singh Ahuja, president, Sikh Forum, Delhi, said, ‘The PM is a Sikh at heart. He has a deep understanding of the Sikh scriptures, gurus, the language and culture. No other prime minister has had such a level of understanding of these issues.”

The majority of the guests termed the constitution of the Special Investigation Team to reinvestigate cases pertaining to the 1984 Sikh massacre as significant saying the move would bring closure to victim families.

“The creation of SIT has reactivated the dead cases of 1984 riots. This is a significant step,” said Ahuja.

Mahant Karamjit Singh, president, Sewa Panthi, Yamunanagar, quoted the PM as saying, “The prime minister says Sikhi is in his blood, service is in his blood.”

“He has achieved much for the Sikh religion – the Kartarpur corridor opening, the announcement of December 26 as Veer Baal Divas in memory of Sahibzadas of the tenth Sikh Guru; restoration of Gurdwara Lakhpat Sahib destroyed in the Gujarat earthquake; and GST waiver on langar,” Karamjeet Singh said.

Harmeet Singh Kalka, president, Delhi Sikh Gurdwara Management Committee, hailed the affection the PM had for Sikhs saying, “The work the PM has done for the community – the constitution of SIT, the arrest of former Congress MP Sajjan Kumar, the opening of the Kartarpur corridor – had honoured the Sikh sentiments.”

Manjit Singh Bhatia, president, Singh Sabha Gurdwara Sahib, said the PM had strengthened the Sikhs and the nation on the world stage.

“Wherever he goes he embraces the Sikhs because he knows how much they have sacrificed for the nation and how dedicated they are to the spirit of service. The opening of the Kartarpur Corridor is a welcome step. The way he has projected the country globally is a marker of the teachings of Guru Gobind Singh,” said Bhatia.

Prabhleen Singh, president, Young Progressive Forum, Patiala, said that since Independence no government had the courage to do for the Sikhs what PM Modi had done. “PM Modi scrapped the black list. I travel globally. I used to see the rage among diaspora Sikhs who would say they could not pay obeisance at the Darbar Sahib, could not meet their families, could not look after their land just because they were on the black list. The removal of the black list has led to the affected Sikhs blessing the PM. We all pray for the PM’s long life.”