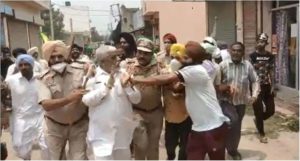 Video grab of mob attack on BJP leaders in Rajpura

Yet another shameful incident of politically motivated mob violence in Punjab has come to light wherein senior leaders of the Bharatiya Janata Party (BJP), while holding an internal meeting of the party in Rajpura, Punjab were chased, roughed up and held hostage by an irate mob. The mob wished to be passed off as “agitating farmers” but it was quite obviously politically motivated and holding an agenda to suppress the BJP.

The mob comprised of more than 500 goons who were armed with weapons like swords and staffs; the presence of arms within the crowd cannot be ruled out.

The meeting was being chaired by BJP leader Bhupesh Aggarwal at the Bharat Vikas Parishad building near the new grain market in Rajpura. As the mob started increasing police force intervened but not to the extent of dispersing the mob.

In what can be deemed to be a total failure of police authority, Bhupesh Aggarwal had been told earlier that he should finish the meeting in 30 minutes. That normal political activity anywhere within India would be thus curtailed by the very authorities that are responsible for maintaining law and order is appalling.

The police claim that it was on top of the situation but the reports and the videos coming from the site of the incident tell a very different story. They show half hearted attempts by the police to control the unruly crowd while the BJP leaders were being heckled and humiliated.

It is by now well known that one Prem Singh Bhangu, who professes to be a farm leader, was at the helm of the attack. It will be interesting to know what action the Police and administration take against the person and also if the Farm Agitation leadership will expel him for breaking the “peaceful agitation” code.

It is to the credit of the BJP leadership that it continued with its activities even as the threat from the mob continued. The BJP state General secretary Subash Sharma, most courageously, went to the site of the incident to address a press conference. The venue of his media interaction was also cordoned by the mob and he along with other leaders was held hostage for hours on end.

In a video released from the house where he along with other leaders was held hostage, Subhash Sharma said, “It’s like terrorism days in Punjab. Police are not acting against goons.” He did not mince any words in blaming the Congress for the lawlessness and politics of violence that were being played out.

The statement made by Subash Sharma was further reinforced by the BJP National General Secretary Tarun Chugh, who also slammed the State Government being led by Captain Amarinder Singh for allowing such elements a “free run” in the state. “These Goonda elements, in the name of farmers, have held the state to ransom and have plotted against the BJP,” he said.

Creditably, the High Court of Punjab assembled in the middle of the night and directed the Director General Police (DGP) of the state to ensure the safety of the BJP leadership. It has given time to the police till 2 PM on 12 July to submit a reply.  The court has also served notice to the government to ensure the security of the political leaders.

The directions passed by the High Court are to the eternal shame of the state administration.  It has been fairly and squarely ticked off for abdication of duty. Despite this shame and public revulsion at the state of affairs, Chief Minister Amarinder has issued no statement to condemn the attack nor has he given any assurance of a timely enquiry into the incident. This is a clear indication of the complicity of the Congress in what is going on; it gives credibility to the statements made by Subash Sharma and Tarun Chugh. 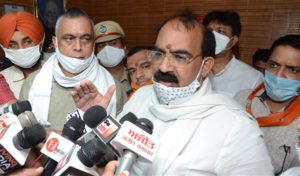 Such attacks have been going on ever since the Farmers agitation established camps on the borders of Delhi. The agitation leaders swear to the “peaceful nature” of the agitation. The central government is dealing with the agitation with utmost patience, there have been no incidents of the state apparatus attempting to pressurise the agitators. Sadly, what is happening in Punjab is quite contrary to the assertion of the agitation being peaceful. It is on the shoulder of the farm agitation that the horrifying attacks of BJP cadre are being carried out.

On 12 October, 2020, Punjab BJP President Ashwani Sharma was attacked by a violent mob in Hoshiarpur while he was travelling from Jalandhar to Pathankot. A little after that, the houses of many BJP leaders were surrounded by violent mobs and in one instance tons of garbage was thrown outside the house of a senior BJP functionary. The state government did not take any action against the assailants who gained the confidence to carry out more such attacks.

The practice continued till the shameful incident on 27 March 2021 when BJP MLA from Abohar, Arun Narang, was attacked by a mob of so-called farmers, actually political activists. His clothes were torn, black ink was thrown upon him and he was thrashed mercilessly. In this instance too, the police remained a mute spectator, refusing to take any action to control the crowd. “I have a hunch that the state government could be behind it. It needs a thorough investigation. I don’t trust Punjab police now,” said Narang in a forthright manner after the attack.

Then on 13 April 2021, a mob attacked the convoy of Shri Ram Gopal who is the State head of “Haryaval Punjab,” a social welfare organisation dedicated to promoting organic farming, sowing and growing useful trees and greenery, management of plastic waste and similar projects all over Punjab. He was targeted for being a member of the Rashtriya Swayamsevak Sangh (RSS).

The frequency of the attacks has been increasing over time. Two factors are attributed to this situation.

The first is that the BJP cadre is not reacting to the attacks in strength; this is a mature and noble policy that is greatly assisting in maintaining peace and harmony in the state despite grave and unjustified provocation. But it is also building the confidence of the opposition to continue with its nefarious activity.

The second and more important is the casualness and complicity of the administration, especially the state police which seems to be the direct consequence of the directions from the top. The success of each attack has emboldened the mob to become larger, more irate and aggressive.

It is very sad to note that some segments of the media are also glossing over the criticality of the situation. They have described the criminal attack at P Rajpura as, “a group of farmers protesting against the Centres farm laws chasing away a local BJP leader.” A media report cannot get more callous than this.  Others have covered the incident by use terminology of “reportedly and allegedly” when there is no doubt whatsoever about the incident having taken place. It is apparent that an attempt is being made to downplay such incidents with the intention of removing public perception from them and also ensuring that they can carry on in the future.

A few days earlier, the author of this article had uploaded an appeal to Captain Amarinder Singh to put a check on what he termed as “Politics of Violence” in the state of Punjab. The very respectful appeal is available on his You Tube channel https://www.youtube.com/watch?v=ljGb_hwZhss&t=3s it is sad to note that the CM has given no credence to the appeal and a series of attacks have taken place since then, the main being the one at Rajpura. It does give an impression that what is happening has his sanction.

In its aura of power, the ruling party in the state and its leader Captain Amarinder Singh are conveniently glossing over the fact that it is playing with fire. At stake is the social integration of Punjab that is so close to the heart of every Punjabi and the sanctity of the Constitution of India. This aspect has been very aptly expressed by Ashwani Sharma, President BJP, Punjab,. “This is an attack on democracy, and not BJP. There is complete lawlessness in Punjab, as police have become mute spectators,” he has said.

It is the right of all citizens of India to follow their political affiliations freely and without fear/intimidation; any attempt to subdue the same goes against democratic tenets and the spirit of the Indian Constitution.

The parties that oppose the BJP should fight a political battle within acceptable democratic norms and defeat the party fairly and squarely in the ballot during elections, if they can. By resorting to such shameful and dishonourable tactics they are showing their own insecurity and lack of character.

What is happening in Punjab for the sake of political brinkmanship is absolutely reprehensible. It goes against the very tenets of the traditional brotherhood that Punjab has witnessed since centuries. It is a deep slur on the concept of “Punjabiat.”

(Jaibans Singh is a social worker and a columnist)