You are here: Home / Areas of Study / Governance & Politics / Praiseworthy response to the Corona crisis by Rashtriya Swayamsevak Sangh
Share

As the Nation continues with its disciplined and mature response to spread of the Corona Virus, Rashtriya Swayamsevak Sangh (RSS) Sarsanghchalak, Dr. Mohan Ji Bhagwat, in an online address on Sunday,  26, April, called upon the organisation to stand united and help all needy persons without any discrimination whatsoever. 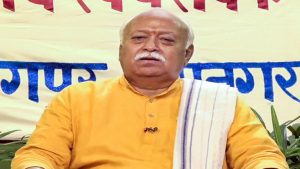 While elaborating the concept of “Ekant Mein Atam Sadhna, Lokant Mein Paropkar,” Dr. Mohan Ji Bhagwat, said that the lock down had undoubtedly restricted activity of the RSS Swayamsevaks. However, life goes on despite the lock down and so do the functions of the Sangh. Formal activity may have been curtailed but alternate activity is carrying on. He said that the need was for us to be good human beings and use our goodness to make the world also good.

The decision of complete lock down is a very difficult one for any leader to take, especially so a democracy where people look upon such restrictions as an impingement of their freedom and liberty. Countries where leaders dithered in taking such a strong decision are now suffering horrifying consequences.

When Prime Minister Narendra Modi took the very difficult and sensitive decision of the first lock down from March, 25 to April, 14, the people, most creditably, reposed complete confidence in their leader and adhered to guidelines in letter and spirit. They have done so in the second spell of the lock down too which is still underway. The RSS was among the first to hail the decision as correct and justified, it stated that the, “steps taken by India’s leadership are an example for the developed nations.”

The organisation then committed itself to seamless application of the same with all resources at its disposal, within the ambit of whatever was permissible under rules.

When faced with this crisis the Sangh moved fast in evolving its strategy to meet the challenge. It realised the importance of social distancing and lock down. Accordingly, on March, 14, ten days before the Government took the complete lock down decision, the Sangh had already cancelled  a scheduled three-day annual meeting of  the Akhil Bharatiya Pratinidhi Sabha (ABPS), its highest decision-making body, to be held at Bengaluru  from March 15 to March 17. It was done to adhere to the advisories that the Government had started issuing at that point in time.

This year, Ram Navami  (A  religious festival in honour of Lord Ram)  was expected to be observed in a special and grand celebration. The Sangh and all Hindu religious organisations unanimously decided to halt the much longed for peoples participation in Ayodhya, the birth place of Lord Ram, and across the country.

The leadership of the Sangh also denounced attempts by some vested interests to give to the  crisis a communal sheen by referring to the restriction as an impingement of their religious rights. The Sangh, on its part, supported closure of all temples and places of religious activity and curtailed all initiatives being taken under its watch.

The lock down brought with it a very critical set of socio-economic challenges. Many who were outside their homes got stuck where they were. While those with means had the facility to absorb this difficulty, the migrant labour working in different cities got into a deep crisis. They wanted to get back to its villages which would have caused tremendous damage through widespread infection. Also, the daily wagers were left without work and resources as were tribals, nomads and beggars. Even animals like monkeys, street dogs, cats etc. that were dependent on food from humans faced trouble.

The Sangh immediately set in motion a country wide support system. “All Swayamsevaks are urged to plan to form small teams and engage people on the need for cleanliness, health and awareness in society. They should also arrange for distribution of food materials to the needy,” said Suresh Bhayyaji Joshi, RSS National General Secretary. “Be in regular contact with the local administration and public representatives to understand their expectations and provide the necessary assistance. Also, fully co-operate in the implementation of the decisions taken by the government,” he added

Welfare initiatives were conducted only after close liaison with the administration and the local leaders. As a first step, the organising committees in all states, cities and districts took care to restrict the number of volunteers working outdoors to barest minimum. Proper passes for the volunteers were acquired. Those working outside were  trained to maintain all prescribed medical norms in the strictest manner. People who were not working on ground came up liberally with financial support and organising of the food and essentials packets etc.

Packets having essential items like rice, flour, pulses, sugar, oil, basic spices used in cooking, salt, tea, soap were made and distributed to the needy nationwide. Cooked food was provided in places where the facility was not available. Help lines were established that took down the problems, not only of their own areas but across the nation and the information was exchanged in a very fast and efficient manner. Main focus was on old people, students, children and those with serious health issues. Those requiring emotional support and motivation were spoken to and inspired to feel secure. Wherever the adminsitration has come up with a request for some item like masks, Sangh workers got down to producing them locally. Lakhs of masks have thus been provided, when hospitals have called for blood Sangh volunteers have responded to the call.

The Sangh did some sterling work in the domain of giving information about the medical norms to be followed.  Everybody, especially those less educated, were told about the need to maintain social distance, wash hands regularly, maintain cleanliness and other medical statutes. Social media, personal interactions, posters, loudspeaker messages and many other means were put to use for this purpose.

Very silently and steadfastly, hundreds of thousands of Sangh Swayamsevaks (Volunteer workers) have been working. While providing aid, no differentiation is being done in grounds of caste, creed, type of work etc. Need is the only parameter considered. The vast experience that the organisation in extending social service during emergencies and natural calamities has been put to good use.

Punjab had a large number of Non Resident Indians (NRIs) visiting  in this period from countries that were badly affected by the Virus. They needed to be accounted for and during this time isolation was very necessary. It was for this reason that Punjab adopted very stringent curfew like lock down conditions, and very rightly so. Under the circumstances the poorer section of society was very badly hit. It was under these difficult circumstances that Sangh volunteers came forward with the much needed assistance despite difficult and dangerous conditions . The local Sangh leaders led from the front in all districts of the state. From big cities like Amritsar, Jullundur, Ludhiana, Taran Taran and Bhatinda to smaller townships like Rajpura, Jaito, Muktsar etc all places were covered in the relief effort.  Apart from going from place to place, Sangh volunteers gave their personal phones as helpline numbers for immediate contact. The seamless cooperation between administration, social workers of all Gurdwaras, Sangh volunteers and other organisation led to an admirable control of the situation which had every possibility of spiraling out of control.

The Corona Virus has brought strong developed Nations to their knees. The strength of a Nation is established by its  response to a crisis. It is in this regard that India is being looked upon as a leading light for the world to emulate.

Respected Dr. Mohan Ji Bhagwat has observed that this problem is likely to persist and all volunteers should be ready for a long haul. The Nation will face the challenge, as one, so long as it does not get contained. This is the resolve of every Indian