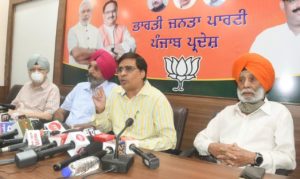 Chandigarh, 16 September:  The BJP, Punjab, in a press conference at party headquarters on 16 September attacked the Congress president for his allegations that the Centre’s farm laws are a “photostat copy” of the Punjab Contract Farming Act, 2013 enacted during the previous SAD-BJP government led by Parkash Singh Badal.

The BJP maintained that when Punjab Contract Farming Act, 2013 enacted Navjot Kaur Sidhu, the wife of Navjot Sidhu, was part of the Government and yet she did not raise any objections. This apart, Sidhu himself was Member of Parliament from the BJP and he too chose to remain quiet.

The BJP further queried as to why the Congress led Government of Punjab could not remove the Act in the last four and a half years if it is not acceptable to the party?

The BJP reiterated that the process of reforms in the farm sector was initiated by the Dr. Manmohan Singh led Congress Government . In 2013 Rahul Gandhi, in a press conference, had called upon all Congress ruled states to be bring about reforms in the APMC Act. In 2017, the Congress Government in Punjab had created provision for private Mandis and private yards under the APMC Act.

The BJP demanded that Navjot Sidhu as President of the Congress party should call for a special session of the state assembly and get the APMC act passed by the state government abrogated. In case he does not do so then he should apologise to the to the people of  Punjab for lying and misrepresenting the facts associated with the Contract Farming Acts.

Targeting Captain Amarinder Singh over his statement on economic loss due to farmers’ agitation, the BJP today said the Chief Minister was himself responsible for Punjab’s economic crisis as he was the one to first fuel the farmers’ movement.