You are here: Home / Areas of Study / Governance & Politics / Punjab needs a strong, disciplined BJP government that can tackle the real issues
Share 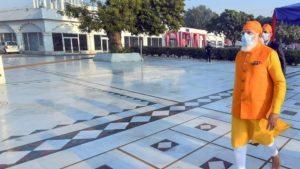 The election heat has gained momentum in Punjab with new and unique challenges coming to the fore with every passing day. The overall sentiment is that both Congress and SAD have consistently failed to deliver and, as a consequence, Punjab has been on the decline for many decades now. The people are looking for an alternative which has made the electoral position of these two parties quite tenuous.

Beyond the sentiment, the Congress is mired in an ugly spat between its senior most leaders aspiring for the chief ministerial chair. The spat has not been favourably viewed by the people. The SAD too is finding it difficult to reach out to the electorate mainly because of the sacrilege case and lack of a leadership alternative to the Badal family.

The Aam Aadmi Party (AAP) had entered as a serious contestant in the 2017 elections, it was predicted to do well but could garner only 20 seats and that too in the Malwa region of Punjab. The party has a proclivity of always remaining in a state of internal conflict, mostly due to the dictatorial attitude and overwhelming ambitions of its supremo, Arvind Kejriwal.

Something similar happened in Punjab too and with time more than half of the elected MLAs of the party defected to other parties. This did not deter the party from opening its doors for the disgruntled elements of other parties and making up its rather depleted cadre. With this motley group of has-been politicians, supported by a loud and propagandist  election campaign, the party is making its second and more concerted attempt to wrest power in the state.

The financial resources to launch such a huge campaign by a party that has signature only in one state (Delhi) and that too with barely one fourth governance responsibility, are being questioned by the people of Punjab. It is felt that as the party is drawing funds from Delhi to fight elections in Punjab and, at a later stage, it will similarly draw funds from Punjab to fight elections elsewhere. Punjab, already under debt for nearly Rupees four lakh crore cannot afford such a drain; this apprehension is weighing on the minds of many within the intelligentsia there.

Rumours and allegations of selling of tickets by AAP to prospective candidates are doing the rounds in Punjab and have found coverage in the media from time to time; a lady from Ferozepur, Punjab, recently levied charges of molestation and admitted to many others who had been similarly exploited, the matter has been reported by the lady to the Women Commission and is presently under police investigation. While promising to tackle the drug issue in Punjab, AAP has drastically increased the number of liquor vending shops in Delhi itself, on top of it, the chief ministerial candidate of the party, Bhagwant Mann, is a confirmed alcoholic.  The aforementioned and other factors have made people apprehensive of gravitating towards AAP despite its very loud and abrasive media campaign.

The Bharatiya Janata Party (BJP) has been a junior partner in a SAD-BJP alliance in the state for many decades. The alliance was made to strengthen the social fabric of the state during the troubling times of militancy as has been clarified by Prime Minister Narendra Modi in a recent interview to ANI; it held firm for many decades. 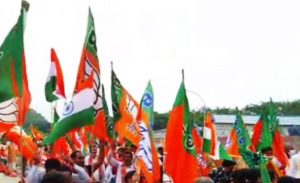 Resurgent BJP has launched a proactive election campaign in Punjab

The downside for the BJP of this long alliance was that the party could not establish its roots as a pan-Punjab entity. It adopted the position of a pressure group with presence in only about 23 seats of the Hindu belt of the state. When the alliance broke in 2019 as a consequence of double-cross by the SAD with regard to the farmer agitation, the party was left with the challenge to create a pan-Punjab presence. Despite many other challenges posed by the Corona pandemic and the long drawn farmer agitation, the party did take herculean steps forward to find a presence in all 117 constituencies of Punjab.

The BJP went further to stitch an alliance with two political factions – the newly formed Punjab Lok Congress (PLC) of Captain Amarinder Singh and the Shiromani Akali Dal (Sanyukt). The three parties are now in a seamless alliance and are together fighting all 117 seats on a sharing basis. It is gaining acceptance among the people and may well spring a surprise in its favour when the results of the election is announced.

Much before the action began, the need for a new leadership to emerge was widely felt. The need has not thrown up any new talent, instead, it has thrown new parties, alliances and organisations into the fray. The end result is that instead of the usual contest between the traditional rivals, Congress and Shiromani Akali Dal (SAD) there are now three more parties and alliances contesting energetically.

The election pitch of Congress, SAD and AAP is based on giving out doles of free electricity, water, health facilities, school education and a host of other lollipops. These parties are fighting shy of addressing the more important and core issues like security, law & order, corruption, illegal mining, drug abuse, education, employment, health, environment etc. These issuers are the prime focus of the BJP and its alliance partners. It is so because, being a national party, BJP has the vision and more importantly the strength, expertise, experience and wherewithal to push Punjab out of the morass of corruption and mis-governance that is presently mired in and this is the key result area of the party.

Sadly, the media too is always looking for sensational news during election period and as such the spotlight is on the constant bickering for CM post in the Congress, the choice of Bhagwant Mann as CM  candidate for AAP and other such mundane issues. The real issues that the BJP propounds are not getting media attention, the party also has no juicy story to tell about intra-party rivalry and mud-slinging etc. The strength and discipline of the BJP is coming in the way of it getting media spotlight; yet the party is consistently working hard on its grassroots presence as also its alliance. The silver lining is that slowly and steadily a perception is finding roots in Punjab that the BJP and alliance are the only party that has potential of bringing about the much needed paradigm change in Punjab. Punjab needs a strong disciplined government that can tackle the real issues and this attribute is available only with the BJP. It is hoped that the perception will catch the imagination of the people at the right time and voting is done for progress and prosperity rather than small time promises that can only add to the financial distress of Punjab and not alleviate the suffering.