You are here: Home / News / ‘Sacrilege’ suspect done to death at gurdwara in Kapurthala; FIR against 100
Share 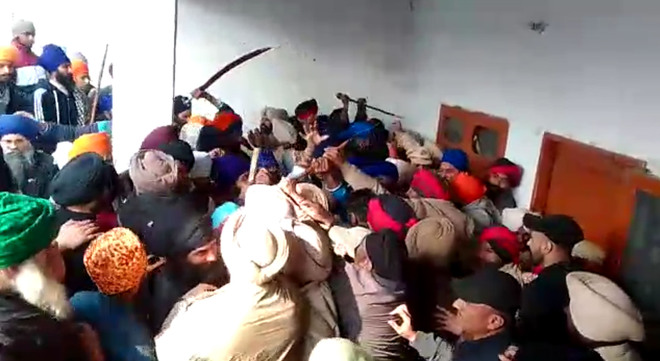 20 December, 2021 – Jalandhar : Day after the death of a suspect following a “sacrilege” bid at the Golden Temple, a man was done to death for allegedly disrespecting Nishan Sahib at the gurdwara of Nizampur village in Kapurthala in the wee hours here. The Kapurthala police claimed as per preliminary investigations, it seemed to be a case of theft and the police were further verifying the allegations of sacrilege.

An FIR has been lodged against four persons by name and 100 others at the Subhanpur police station under Section 295A (outrage religious feelings) of the IPC.

The gurdwara management, however, claimed the youth had attempted sacrilege. “Around 4 am, the man unfurled the Nishan Sahib and fiddled with it before entering the gurdwara store. He was noticed by granthi Amarjit Singh. He along with local sewadars caught hold of the suspect and tied him up in the store, where he was beaten up,” claimed sarpanch Surinder Singh.

The police arrived around 6 am and heated exchanges followed with villagers and religious groups. As the police tried to take the man into custody, the mob resisted their attempts. Irate residents broke open the store’s door and allegedly assaulted the suspect. Three police personnel were injured in the melee.

A video of the assault later went viral on the social media. Religious groups held a dharna outside the police station after some villagers were apprehended by the police, before being let off.

Kapurthala SSP Harkamalpreet Singh Khakh said: “Around 200 people were present when the police arrived at the scene around 6.30 am. While we tried to get the man out for questioning, locals opposed it. The suspect had already been beaten up before the police arrived. The mob broke open the door of the room and assaulted him again. Policemen were also manhandled and three of our men sustained injuries.”

“As per the investigation so far, sacrilege has not been established as the motive. It seems theft was his intent. Further probe is on. A case under Section 295 A of the IPC has been registered,” said the SSP. IG (Jalandhar Range) Gurinder Singh Dhillon said it was not a case of sacrilege. The police had not included Section 302 (murder) in the FIR till the filing of the report. They maintained more sections would be added after a detailed investigation.

The police haven’t disclosed the names of the four named in the FIR.