You are here: Home / News / ‘Save Mattewara forest’ campaign picks up pace
Share

11 July, 2022 –Ludhiana: The ongoing agitation by activists of Public Action Committee (PAC) to save Mattewara forest, the lungs of the state, today gained further strength with support pouring in from the Congress, Shiromani Akali Dal, Shiromani Akali Dal (Amritsar), the SGPC, farmers’ bodies, in addition to a large number of NGOs working to save the environment. 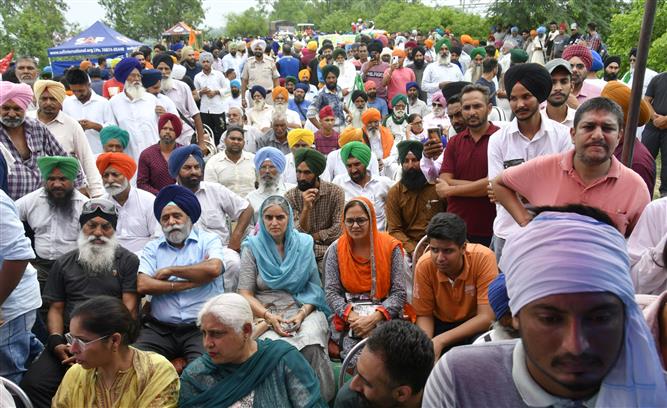 It was the unanimous view of almost all speakers at the protest organised at Mattewara along the Sutlej by the PAC and its supporting organisations that nearly one-fourth of the state’s essential wildlife reservoir, the Mattewara forest would be destroyed if the proposed textile park was set up in the land adjoining the forest. The industrial park would damage the state irreparably as Punjab was already ridden by the incessant flow of untreated chemical waste in the rivers.

It was further maintained that Punjab already had the dubious distinction of a state with one of the lowest ratios of forest area in the country. The destruction of the forest will have major effect on Punjab’s ecology and environment as the state had less than 4 per cent forest area left, said the environmentalists and other speakers at the protest.

For once, the Mattewara protest brought together many political parties with diverse views at a single platform and like the organisers had vowed to keep the protest non-political, leaders of all major parties had to repeatedly assert that they had not joined the protest to draw any political mileage.

PPCC president Amrinder Singh Raja Warring, SAD leaders Maheshinder Singh Grewal and Manpreet Singh Ayali, SAD-A president and MP Simranjit Singh Mann, along with leaders of several factions of the BKU and other farmers’ bodies vowed to lend their support to whatever call was given by the PAC leadership to carry on the fight to save the forest, the Sutlej and its flood plains.

The Narndera Modi-led NDA government at the Centre and the AAP government in the state were targeted by most of the speakers for their overt and covert efforts to rob Punjab of its river waters and forests, most vital to conserve environment and curb pollution, in the name of industrialisation.

Chief Minister Bhagwant Singh Mann was also criticised by PAC activists for taking a volte-face on Mattewara forest. “While in Opposition, Mann had opposed the project of textile park adjoining the forest, but now he was going all out to see the project through,” they alleged.