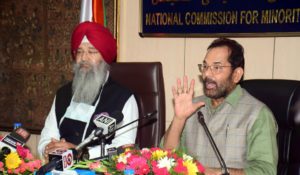 The complaint has been filed by one Bhupinder Singh who has alleged that his son was not allowed to wear his ‘Karah’ at his examination centre in Government Model School, Sector 19-D, Chandigarh. The complainant further stated that  other students were allowed to wear the Karah after tape fixing.

The complaint has been given to NCM among others as this body is inter-alia, entrusted to look into the specific complaints regarding deprivation of rights and safeguards of Minorities.

Sardar Iqbal Singh Lalpura, newly appointed Chairman of NCM took cognisance of the complaint. The commission issued a press note whereby  the body acknowledged that this incident involves persons belonging to the minority community and as such it has called for factual report on the matter from the Chandigarh Administration and National Testing Agency, NTA. The NEET 2021 dress code had mandated that any sort of ornaments must not be worn by students. However, it also mentioned that if they are worn on religious, cultural grounds or for any other valid reason, they will be allowed but proper frisking and checking will be done

It is notable here that on May 03 2018, the Delhi High Court had ruled that Sikh candidates should be allowed to wear or carry ‘Karah’ and ‘Kirpan’ (Dagger, article of faith of the Sikh religion) while appearing for the NEET examination. The Court had, however, put a condition that the candidates wearing such articles of faith will have to report at least an hour prior to the normal reporting time for the screening and other security matters.

Earlier, the Shiromani Gurdwara Parbandhak Committee (SGPC) has also written a letter to the Union Ministry of Human Resource Development (MHRD) seeking its assurance to allow the baptised Sikh students to appear in the NEET examinations with Karah and Kirpan.

In December, 2019, in continuation to the practice established in 2018 candidates appearing for the NEET examination, while wearing a cultural dress and established articles of faith, were allowed to take the test after reporting one hour early.

“The candidates, especially who wish to wear the objects such as ‘Kara’ and ‘Kirpan’ etc. on their person must report at their respective examination centers at least one and half hour before the gate closing time, for ensuring timely checking/ frisking and entry to the examination hall,” the notice released by the National Testing Agency (NTA) read.

Under the circumstances it is quite strange that the conducting authorities at the Government Model School, Sector 19-D, Chandigarh were not aware of the rules and regulations on the subject and allegedly subjected the candidate to harassment .