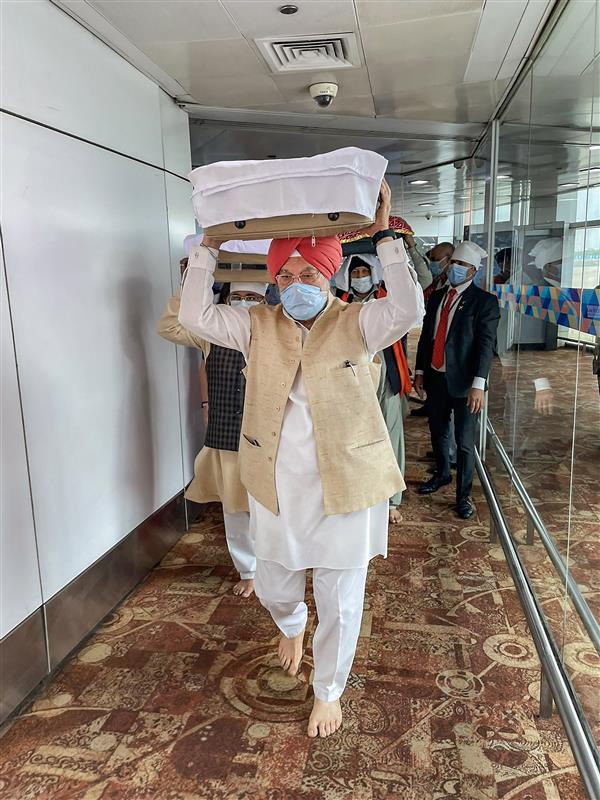 15 September, 2022 – Amritsar: The Taliban-led Afghanistan government has refused permission to ferry four copies of Sikh scriptures (two copies each of Sri Guru Granth Sahib and Sanchi Sahib) that were to accompany a group of 60 Afghan Sikhs, supposed to land in New Delhi on September 11.

It is learnt that the Ministry of Foreign Affairs of Afghanistan had restricted the departure of the holy books for want of “official clearance” from the Ministry of Information and Culture.

The SGPC has strongly condemned the Taliban government over it.

Terming it a direct interference in the religious affairs of Sikhs, SGPC president Harjinder Singh Dhami sought intervention of the Prime Minister and Ministry of External Affairs.

The Indian World Forum, in coordination with the community members in Kabul, has been following this up with Afghan officials, but to no avail. The forum is coordinating evacuation efforts of stranded Afghan minorities with the Ministry of External Affairs, Indian Air Force and SGPC.

As the issue concerned the Protocol Department, the matter was conveyed to it. However, the response was awaited, he said.

“The Afghan Foreign Ministry was adamant that unless an official confirmation letter from the Afghan Culture and Information Ministry was obtained, the scriptures could not be allowed to be taken out of Afghanistan,” said Chandhok.

Meanwhile, former DSGMC president and JAGO chief Manjit Singh GK said Afghan Sikhs had deferred their evacuation till the authorities allowed them to carry the scriptures with them.

“We have sought immediate intervention of the Centre and the Indian mission in Kabul,” he said, appreciating the Indian government for being liberal in issuing e-visas to the minorities stranded in Afghanistan.

Earlier, six ‘saroops’ in two batches were successfully flown in to New Delhi on August 24, 2021, and December 10, 2021. These were brought in a special repatriation flight from Kabul by Afghan Sikhs. Union Minister Hardeep Singh Puri and BJP chief JP Nadda had received the holy scriptures.

According to Sikh religious faith, the ‘saroop’ is considered as a living guru. The transportation of ‘saroop’ has to be governed by a strict code of conduct. As a mark of respect, the Guru Granth Sahib is carried on the head, and the person has to walk barefoot only.

Chandhok Singh, president, Indian World Forum, said, “Around 60 Afghan Sikhs were scheduled to land in New Delhi on September 11, but they could not. The reason is that the Afghan Culture Ministry refused to facilitate the departure of the religious scriptures out of Afghanistan for reasons best known to them.”