You are here: Home / Icons of Punjab / The legacy of Baba Banda Singh Bahadur
Share 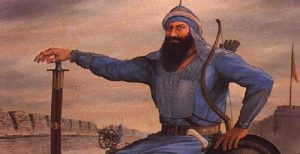 The bravery of Baba Banda Singh Bahadur, the first leader of the Sikh nation, is worthy of being engraved in golden letters in the history of the nation and the world. It is to be read by humanity with a sense of pride to learn how a person can stand against insurmountable odds for the sake of righteousness and justice.

While at Nanded, Guru Gobind Singh came across an ascetic called Madho Das. Madho Das was born a Minhas Rajput in Jammu named Lachman Das. In his early life, he had been a keen wrestler, hunter and soldier. On one occasion, while on a hunt, he accidentally killed a pregnant doe and was overcome with remorse. He became an ascetic and took as his spiritual Guru a holy man named Janaki Das who renamed him as Madho Das. He stayed in a hut on the banks of the River Godavari at Nanded and immersed himself in meditation that gave to him considerable powers.

One day the Guru happened to pass by the hut of Madho Das while on a hunt and he stopped there for rest and refreshment. Madho Das was not in the hut. It is said that when Madho Das came back he was enraged and he tried to intimidate and humiliate the Guru with his occult powers. When his powers had no effect on the Guru he realised that he had made a mistake and offered himself to the Guru as his Banda (servant).

Beyond the folklore what is historically accepted is that Madho Das became a disciple of Guru Gobind Singh and was formally baptised into the fold of the Sikh and the Khalsa. he was renamed Gurmukh Singh but got to be known as Banda.

The Guru gave to Banda Singh five arrows from his own quiver and an escort, including five of his chosen Sikhs, and directed him to go to the Punjab. he was vested with the mission

(Take forward Dharma, give sanctity to Saints, destroy all evil).

The authority and responsibility of taking revenge from Wazir Khan and to destroy the evil Mughal administration in Punjab was vested upon him. Baba Banda Singh Bahadur took a blessing from Guru Gobind Singh and proceeded on the mission given to him. He became the architect of the Sikh Empire while breaking the stranglehold of the Mughal rule in Punjab.

On his journey back to Punjab, as ordered by Guru Gobind Singh, Banda Bahadur was joined by many Sikhs who were keen to avenge the brutal murder of Sahibzada Zorawar Singh and Sahibzada Fateh Singh in the hands of  Wazir Khan, the evil Mughal Governor of Sirhind. After subjugating Sonepat, Samana, Shahbad, Mustafabad, Kapuri and Banur, Baba Banda Bahadur led his troops to take on Wazir Khan.

The battle is recorded in history as the Battle of Chappar Chiri on May 12, 1710.  Sirhind was not an easy target to capture, being the provincial capital and a stronghold of the Mughal Empire in Punjab. Whereas the Mughal Army army had cannons and cavalry, the Sikhs only had swords, spears and small arms.

Baba Banda Bahadur fought like a man possessed and his Sikhs followed him with equal valour. After two days of fighting, Wazir Khan fell to the sword of Fateh Singh and Sikhs raised a victory cry. Banda Bahadur formally took control of Sirhind locality on 14, May, 1710. On 24, May 1710, Banda Singh Bahadur entered Sirhind city after it had been cleared of enemy fighters and announced the establishment of Sikh rule and an end to the tyranny of the Mughal rule which had spread terror and injustice to the people of the region.

This was the first territorial conquest of the Sikhs, which placed them in possession of the entire area south of the Satluj . He established his capital at Lohgarh and minted coins in the name of Sri Guru Nanak Dev. He also liquidated Muslim Zamindars and distributed the land among the peasants thus heralding the first peasant revolution in Punjab. Thus Baba Banda Singh Bahadur established a new monarchy in a short span of 7 years, cutting the roots of the Mughal rule that had been going on for centuries. 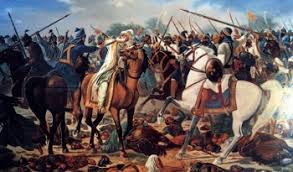 Conflict with the Mughals

The rule of the Sikhs over the entire Punjab east of Lahore obstructed the communication between Delhi and Lahore, which became a big problem for the Mughal empire under Bahadur Shah. Accordingly, a huge force was created under a renowned General called Munim Khan  which set out to retake Sirhind in August 2010.

Banda Bahadur was in Uttar Pradesh and by the time he returned Sirhind had already been taken by the Mughals.  The Sikhs therefore moved to Lohgarh from where they inflicted a terrible defeat on the Mughals. The Mughal army however called for reinforcements and Banda Bahadur was compelled to leave Lohgarh and take refuge in the Chamba forests in Himachal Pradesh. The frustrated Emperor Bahadur Shah put a price on every Sikh head.

Banda Bahadur reorganised himself and by 1712 he was ready to take on the Mughals again. He first defeated Raja Ajmer Chand who was responsible for instigating all the Hill chieftains and the Mughals against Guru Gobind Singh.

By then Bahadur Shah died and the inevitable succession battle between his sons commenced. Banda Bahadur took this opportunity to recapture Sadhaura and Lohgarh. Farrukh Siyar, the next Mughal Emperor, appointed Abdus Samad Khan as the governor of Lahore. In 1713 the Sikhs under Banda Bahadur left Lohgarh and Sadhaura and went to the remote hills of Jammu and where they built Dera Baba Banda Singh.

With Banda Bahadur out of the way, the Mughals inflicted terrible persecution of the Hindus and Sikhs in Punjab. The price for every Sikh head continued which compelled them to hide in jungles. The situation led to a decision by Banda Bahadur to get back to Punjab again.  He came out in 1715,and captured Kalanaur, Batala and Rajpur

There was panic among the ministers of the royal court. The Lahore Subedar (Governor), Abdus Samad Khan, remained seated in Lahore out of fear of getting into direct confrontation with Banda Singh Bahadur. The Emperor instructed Abdus Samad Khan,  to proceed immediately against the Sikhs of Banda Bahadur. Simultaneously, the Emperor ordered several Punjabi Subedars (Governors) and chieftains of adjoining hill area principalities (both Hindu and Muslim) to take their armies to Punjab to help Abdus Samad Khan.

On 19 March 1715, information was received that the Sikhs were located 12 Kos from Lahore city. The Faujdars of the district had fled but it became apparent that battle would soon be joined. Baba Banda Bahadur was not oblivious to the preparations being done in Lahore. He therefore decided to build a “Kachhigarhi” (mud fortress) in the village Mirza Jaan between Batala and Kalanaur. Baba Banda Bahadur’s army and the Raj Mistris (masons) of that region constructed the fort. Nanakshahi brick was used for the construction and the walls were painted with mud. The walls of the fort were still being constructed and the barriers outside were not fully ready when the combined forces under the command of Abdul Samad Khan and Naib Subedar Arif Baig of Lahore attacked the Sikhs in the fort.

From this fort the Sikhs bravely fought the armies of the Mughals and their helpers, but the Mughals’ cannons and bullets forced them enter the open ground. Abdul Samad Khan was shocked when the Khalsa army,  instead of turning and fleeing, pounced upon his forces  and defeated him. The Mughal army suffered heavy losses. Many Sikhs also fell to a heroes death; sadly, they did not have reinforcements as the Mughals had, having collected a large combined force

Banda Bahadur and the Khalsa forces fought with great bravery and retreated steadily under sustained onslaught of the enemy. They  finally made their stand at the Garhi of Gurdas Nangal where the Mughal forces laid siege for 8 months. Finally,  on 17, December, 1715, Banda  Bahadur was captured and taken to Delhi where he was tortured in the most brutal manner before being put to death. His death only enthused the Sikhs into fighting back and, within a century, the Sikh Empire had gained firm roots after having decimated the Mughal as well as the Afghans.

Banda Bahadur laid the roots of revolution in Punjab which was joined by both Hindus and Sikhs in unison. He empowered the peasants and gave to them the confidence to resist tyranny. He gave a true example of loyalty to his Guru by fighting to the last in his name. Many Hindu families sent their eldest son into the Sikh/Khalsa fold to fight against the tyranny of the Muslim rulers. The fight continued for almost a century after Banda Bahadur and it was contested against the Mughals and the Afghans. The people of Punjab emerged victorious and carved out an Empire for themselves under Maharaja Ranjit Singh which was called Sarkar Khalsa

Even though there will always be historical renditions of the victory of Baba Banda Bahadur it is very sad to see that there are not many monuments to record the times for the benefit of future generations. 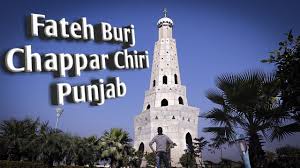 In recent times, the Fateh Burj has been constructed in Village Chappar Chiri, in SAS Nagar(Mohali) Punjab. The 328 feet (100 m) tower is dedicated to the establishment of the Sikh rule in a large part of Punjab in 1711.

The fort at village Mirza Jaan, built by Baba Banda Singh Bahadur is a prized heritage of the Sikh community since its foundation is the foundation of the Sikh Empire. It is a matter of regret that this historical legacy is disappearing without any preservation. It is necessary to preserve the fort at  Mirza Jaan which is 13 km from Batala.