Patiala, Punjab, 04 Nov: Shri Ashwani Sharma took a meeting of the party leadership upto the booth level of the urban and rural constituency of Patiala today. He was accompanied by Dr. Subash Verma, Prabhari, Patiala.
The President was received by the BJP Pradhan (President) Patiala, Harinder Kohli. Also present were senior leaders of the District, including Jaibans Singh, Media Advisor, BJP, Punjab and S. Gurtej Dhillon, State Executive Member, BJP.
Shri Ashwani Sharma carried out an assessment of the preparation of the party for the state Assembly elections slated for February 2020 and expressed great satisfaction with regard to the hard work and dedication of the leaders and workers. He motivated the party cadre to reach out to the grass roots in explaining the ideology of the party and its pro-people policy.
Ashwani Sharma said that the competition of the party was not with any other party but with itself and emphasized the need to keep pro-nation, pro-people ideology alive. 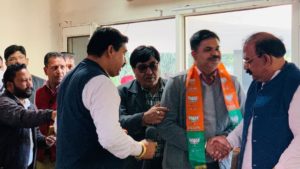 The party President reiterated the decision of the party to fight all 117 constituencies in the election and expressed confidence of winning with a huge majority.