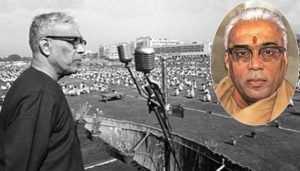 The third Sarsanghchalak (Head) of Rashtriya Swayamsevak Sangh (RSS) Respected Madhukar Dattatraya Deoras, who was popularly called Balasaheb Deoras,  was among those few who had the privilege of growing as a Swayamsevak under the wings of Dr KB Hedgewar, the founding Sarsanghchalak of the RSS . In due course, Dr Hedgewar sent him as the first pracharak to Bengal in 1935.He had a steady growth in the organisation while serving in various capacities.

In 1963 he became General Secretary of the RSS and played a major role in building up the poliotical party – Jan Sangh. Before breathing his last the then Sarsanghchalak MS Golwalkar passed on the baton to Deoras ji in 1973.

As  the third Sarsanghchalak of the RSS , Deoras ji vigorously undertook the mission of removing untouchability in the society so that an all-pervading cultural spirit of “Samrasta” ( equality) could be revived. He took to the popular saying that “if there was nothing wrong in untouchability, then there is nothing right in this world”.

As militant violence started spreading in Punjab in the late seventies and early eighties, the state became an acid test for Deoras ji for effectively translating  his idiom of “Samrasta.” The shade of violence spread by people like Jarnail Singh Bhindranwale soon became communal and anti-Hindu at many places. Some random incidents when cigarette butts were thrown in Gurdwaras and head of killed cows were placed in front of temples threatened to consume the state in the communal conflagration. It was at this stage in 1982 that Deoras ji got seized with the situation and made sure that a resolution was adopted at the All-India Pratinidhi Sabha of the RSS condemning such incidents and invoking the message of ninth Sikh guru, Guru Teg Bahadur, to protect the Hindus.

A similar resolution was also adopted in 1983 as violence continued unabated in the state.

As the number of incidents targeting Hindus increased manifold in the state, spreading fear among them and also making a large number of Hindus flee the state, Deoras ji made sure that the RSS Swayamsevaks did not let communal harmony take a beating in these circumstances.

He also ensured that there was no violent retaliation from the Hindus against what Bhindranwale and others were doing to target the Hindus.

In 1984 after the Operation Blue Star, Deoras ji squarely held petty politics of the Congress and the Akalis responsible for the large-scale bloodshed in the Golden Temple and other parts of the state. A resolution adopted at the Pratinidhi Sabha strongly condemned the Central government for letting the militants settle firmly in the Golden Temple premises and let the law and order situation slip out of its hands.

While realising that the Centre was not serious in addressing the problem in Punjab, Deoras ji floated the idea of forming the Rashtriya Sikh Sangat in 1985. The effort was to set up an organisation which could uphold the ideals of the Sikh Gurus and the ethos of the Hindu-Sikh unity in its cultural background.

In the same year, Deoras ji invited Akali Dal President, Harchand Singh Longowal, to share a stage with him in Rajpura at a three-day convention held by the RSS. Both, Deoras ji and Longowal addressed the people from the same stage and attempted to deliver a message of Hindu-Sikh amity and unity from the stage.

These steps went a long way in ensuring that the communal tension did not flare up in Punjab.

In 1989 a nerve-chilling incident took place in which militants attacked an RSS “Shakha” in Moga and killed 26 Swayamsevaks. The entire RSS was in a state of shock, yet, Deoras ji made sure there was not any kind of retaliatory action by the Hindus. Soon thereafter he came to Ludhiana and addressed the Swayamsevaks to instil a sense of confidence in them and to reassure the bereaved families that the entire nation stood by them in this moment of crisis.

Deoras ji gave a message of tolerance and patience to the people saying that the evil designs of nefarious forces would soon come to end. Undoubtedly, it was the undertone of his message of “Samrasta” that made sure that there were no communal riots in the state even during the worst days of militants violence.

So when the blood-soaked state of Punjab overcame the crisis in mid-nineties, it was Deoras Ji’s contribution that stood out in a distinguished manner. As a Sarsanghchalak he made sure that his message of “Samrasta” won over the evil divisive forces in Punjab.

(Author is a Chandigarh based senior Journalist)