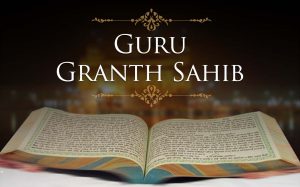 On the 15th Day of Bhadon (Full moon), 1604, that falls on 28 August this year, the Sri Guru Granth Sahib was ceremonially installed in the inner sanctuary at Sri Harmandir Sahib, Amritsar. Baba Buddha Ji opened it with reverence to obtain from it the Hukamnama (Divine command) as Guru Arjun stood in attendance behind. The Hukamanma was “Santa Ke Karaj Aap Khaloiya Har Kam Karavan Aaya Raam” (Waheguru ji Himself come to see task of HIS disciples fulfilled).

Sri Guru Granth Sahib, also called Adi Granth or Adi Guru Darbar, is the holy book or scripture of the Sikhs and is looked upon as a perpetual, ultimate,eternal and living Guru of its devotees. It is a spiritual guide for mankind that plays a central role in “guiding” the way of life of its devotees. Its place in Sikh devotional life is based on two fundamental principles:

Guru Granth Sahib comprises of 1430 Angs (pages) and 6000 hymns or verses called Shabads. Its contents are preaching’s of the Gurus and are referred to as Guru’s Bani (holy words) or Gurbani. Guru Nanak Dev, composed many holy hymns for the Sikhs to recite in their morning and evening prayers. His successor Guru Angad Dev continued the tradition. Guru Granth Sahib consists of this divine Bani of six Gurus of the faith and renditions from many more saints both Hindu and Muslim..

The first book called Adi Granth was compiled by the fifth Sikh master, Guru Arjan Dev Ji. Guru Arjan Dev initiated a process to collect the original verses of all the Gurus before him. He sent Sikhs like Bhai Piara, Bhai Gurdas and Baba Buddha across the country in search of original manuscripts. The Guru personally travelled to Goindwal, Khadur Sahib and Kartarpur to visit the families of the previous Gurus and collected original manuscripts from Baba Sri Chand (son of Guru Nanak), Bhai Datu (son of Guru Angad) and Bhai Mohan (son of Guru Amar Das. He finally incorporated the hymns composed by Guru Nanak and thirty-six Hindu and Muslim saints like Kabir, Ravi Das, Naam Dev and Sheikh Farid. After having selected the best hymns Guru Arjan Dev dictated the final version to Bhai Gurdas who wrote the Granth Sahib.

The Adi Granth was completed in 1604 and installed in the Golden Temple. This original copy was translated into many different languages, reflecting its many different authors. Prakash Utsav of  Guru Granth Sahib is on the 15th day (New Moon) of the Bhadon, the sixth month of the Punjabi calendar, which occurs in August or September in the Western calendar.

Some people poisoned the mind of Mughal Emperor Jahangir by spreading a rumour that Guru Granth Sahib and Gurbani preached hatred against the Muslims. An enraged Jahangir ordered Guru Arjan Dev to delete some of the hymns in the Guru Granth Sahib manuscript and imposed upon him a fine of 200,000 rupees. Guru Arjan Dev refused to expunge the so-called offensive text or pay the fine since he did not have a personal wealth of 200000 Rupees and was unwilling to take the amount from his Sikhs despite their begging him to be given permission to pay the fine and save his life. Guru Arjan Dev was against making alterations in the hymns as required by Jahangir and instead preferred a martyr’s death. This led to his execution.

The tenth master, Guru Gobind Singh, added one Shloka (Dohra Mahala 9 – Ang 1429) and all 115 hymns of his father, Guru Tegh Bahadur. This second edition came to be known as Sri Guru Granth Sahib.

Guru Gobind Singh commanded the Sikhs in the following words:

(Under orders of the Immortal Being, the Panth was created)

(Consider the Guru Granth as embodiment of the Gurus)

(Those who want to meet God, can find Him in its hymns)

(The pure shall rule, and impure will be no more)

(Those separated will unite and all the devotees shall be saved)

When Guru Gobind Singh left is human form in 1708, Baba Deep Singh and Bhai Mani Singh prepared many copies of the Sri Guru Granth Sahib for distribution. The original version of The Guru Granth Sahib can be found at Nanded Sahib, a city in Maharashtra. 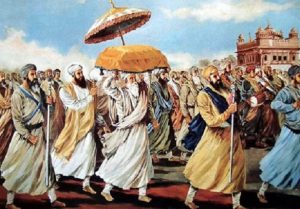