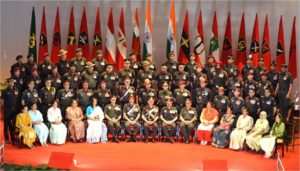 Sena Medal, Bar to Sena Medal, Yudh Seva Medal and Vashisht Seva Medal were awarded. The 92 recipients of the gallantry awards were such soldiers of the Command who have  exhibited exemplary courage under extreme operational circumstances. The 25 distinguished service awards were presented for selfless service to the nation.

The Next of Kin (NOK) of the soldiers who had laid down their lives and were awarded by the grateful nation came proudly to accept the award on behalf of the fallen soldiers; among them were widows (Veer Naris)  of the brave hearts. Mrs Sunita Dwivedi, Regional President AWWA, Northern Command, interacted with the NOKs and presented them with a token of appreciation for the sacrifices of their husbands.

While congratulating the awardees, whose singular acts of valour and selfless sacrifice have been instrumental for the operational successes achieved by the Northern Command, the Army Commander had a special word for the Veer Naris. “I commend the Veer Naris present here who bear the unfathomable loss of their loved ones with stoic silence. I wish to reassure you that we stand firmly besides you on your loss and remain committed to ensuring our unstinted support to you. We are deeply committed to ensure your resettlement with utmost dignity in society,” he said.

The evening before the ceremony, the Army Commander and his wife Mrs Sunita Dwivedi most graciously welcomed the gallant heroes and families of the brave hearts in an elegant function at Udhampur. 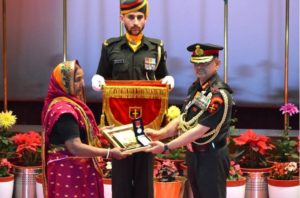 The investiture ceremony witnessed an august gathering of the Army personnel and many distinguished personalities from the civilian stream. The Army Commander, in his address, welcomed the distinguished guests and expressed the pride and honour that he felt in “sharing the moment of distinction and glory with our gallant awardees.” He further extended his compliments to the brave awardees for their inspiring acts of valour and sacrifice in the highest traditions of the Indian Army.

Lt. General Upendra Dwivedi took over the reins of the prestigious Northern Command in February, 2022. The investiture ceremony afforded him an opportunity to put forth his views on his new responsibility in an open domain and he did so brilliantly.

The Army Commander assured the Nation about the high state of readiness of the Command to meet all challenges posed by multiple threats from volatile adversaries. He emphasised upon the “Whole of Nation” approach to meet the challenges and thus reposed full faith in the support forthcoming from the Union Government and the nation at large.

He lauded the bravery and professionalism of the troops that he commands while also acknowledging their exemplary courage and remarkable fortitude in testing times in all operations that the Command has conducted over time and continues to do so.  “The extraordinary zeal and motivation among all ranks reassures me that the security of our borders is in safe hands,” he said.

He echoed the policy of constructive dialogue through both military and diplomatic means to resolve the border issues while making it clear that the Northern Command will remain “committed to defend India’s sovereignty and territorial integrity.” This constitutes a strong yet mature message to our adversaries, should they be attempting some misadventure in coming months.

He reiterated his unstinting support to the welfare engagement of the troops of Northern command with the people of Jammu and Kashmir and Ladakh. It is quite apparent that, under his command, the traditional bond between the soldier and the people of the region will be further strengthened as the people progress and prosper through a “participative approach.” 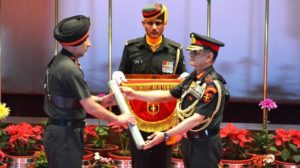 In conclusion, he exhorted all ranks of Northern Command to remain prepared for varied challenges and live up to the hope and trust reposed upon them by their countrymen. The Army Commander also  expressed his gratitude to the people of Jammu and Kashmir and Ladakh, the civil administration and the media for their unstinting support.

The essence of the investiture ceremony was explained, most aptly, by Brigadier Brijesh Pandey of the Northern Command in a curtain raiser talk with All India Radio (AIR). “The Indian army organises the investiture ceremony through the Northern Command every year. Through this ceremony the army, on behalf of the nation, honours and expresses its gratitude to the brave hearts who laid their lives and the brave serving soldiers for the display of exceptional gallantry. We also salute their families for standing behind the soldiers like a rock. This is the way in which the Nation salutes them and celebrates the spirit that says  ‘Nation comes first always and every time.’ It inspires the coming generations to keep serving the cause of the nation in times to come,” he said

The Northern Command is responsible for guarding the Nation’s frontiers with China and Pakistan including the Line of Actual control (LAC), the Actual Ground Position Line (AGPL) with China and the Line of Control (LOC) and International Border (IB) with Pakistan. It is the vanguard for meeting the challenge of the evil proxy and asymmetric war imposed on our nation by our enemy. It is said to be “Always in Combat.” It is also called “The People’s Army” because of its humanitarian interventions in the region.

Troops of the Indian Army are posted across India in their many tenures of duty. It is, however, the tenures in Jammu and Kashmir and Ladakh that are the most cherished because it is here that they get maximum professional satisfaction. Investiture ceremonies are held in other Commands also, but the Northern Command invariably has the largest number of gallantry award winners. Such is the prestige of this Command in the Indian Army.

The recently conducted investiture ceremony in the Northern Command has filled the heart of every Indian with pride  and given complete confidence to the people that the borders of the country are in safe hands.  Lt General Upendra Dwivedi can be rest assured of the respect and support of each and every citizen of the country for his troops.

(Jaibans Singh is an army veteran and a columnist)