You are here: Home / Areas of Study / Governance & Politics / POJK: Give closure to unfinished agenda of partition
Share 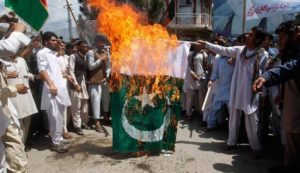 Pakistan flag being burnt in POK

On 22 February 1994, a unanimous resolution was passed by the Indian Parliament, wherein, it was stated that the only outstanding issue between India and Pakistan, so far as Jammu and Kashmir is concerned, is retrieval of such territories that are under illegal occupation of the neighbouring country.  This was the first time in the long history of conflict in the region that India went beyond the United Nations in demanding that the area be handed over in accordance with the spirit of the Shimla Agreement.  India now looks at the whole region comprising Pakistan Occupied Kashmir (POK), also called Azad Jammu Kashmir (AJK) by Pakistan and Gilgit-Baltistan as Pakistan Occupied Jammu and Kashmir (POJK).

In 1952, Pakistan, in utter disregard to UN resolutions, imposed a new regime on POK. The new dispensation had stringent `rules of business’ which ensured that the Joint Secretary of the Ministry of Kashmir Affairs, Government of Pakistan, would control all affairs with a right to attend meetings of the Council of Ministers and tender advice. In effect, the “advice” meant a diktat.

Post the Indo-Pakistan War of 1971 and the resultant Shimla Agreement, a new Constitution was imposed on POK by Prime Minister Zulfikar Ali Bhutto, which stated that Pakistan is only in temporary charge of areas under its occupation. However, successive governments have continued to violate almost all clauses of the Shimla Agreement, the most blatant violation being the covert terrorist operations being mounted on India and J&K from the soil of POJK.

The legal status of the occupied territories came into the lime light once again on 14 September 1994 when the Supreme Court of Pakistan, in the course of an arbitration, stated that the Northern Areas (NAs) (Gilgit-Baltistan) are a part of Jammu & Kashmir state but are not a part of “Azad Kashmir.” Thus, the separation of NAs from POK was legalised. While doing so, the Supreme Court also admitted that the NAs were a part of Jammu and Kashmir.

In all these years things have not changed much for POJK except for the cosmetic grant of autonomy to Gilgit-Baltistan in August 2009. On the contrary, the region has been blatantly and illegally handed over to the Chinese. Pakistan is making China a part of the Kashmir dispute, something that India needs to be wary of.

In yet another serious development during the last few years, terrorist organisations have established their presence in the territory. They are targeting and harassing the local population while also settling permanently in the area with the intention of bringing about a demographic change.

Sadly, successive governments in India since independence have chosen to remain silent spectators with regard to the oppression and atrocity that is being heaped on the people of POJK by Pakistan. When the federal government of Pakistan approved the Gilgit-Baltistan Empowerment and Self Governance Order, 2009, the then UPA government in India lodged its protest two whole weeks after announcement of the totally illegal package. What more needs to be said?

India has failed to take credible steps in the international forums to establish its historic right over the region and demand its return. While the civil society in India debates the issue through seminars and an odd article in newspapers here and there successive governments (mostly Congress led) have chosen to maintain a deafening silence. The Indian media is also not showing much interest in the region.

There are many long standing issues that successive governments in India should have addressed but failed to do so. Filling up the seats reserved for the people of Pakistan Occupied Jammu and Kashmir (POJK) in the Jammu and Kashmir State Assembly is one important aspect. Representatives from Gilgit-Baltistan and Pakistan Occupied Kashmir Diaspora spread over countries around the world can form part of the legislative assembly. India must provide reservations in its universities and professional institutes to students from the occupied territories; opening the health sector for the benefit of the people would be a good humanitarian gesture.

An ostrich-like approach by India has already registered disastrous implications with Pakistan remaining free to nibble into the autonomous status of the region that it had promised to the United nations. Further procrastination would signify India’s acceptance of Gilgit-Baltistan as Pakistani territory. A course correction coupled with a proactive policy of nurturing the growing pro-India constituency in Gilgit Baltistan is the need of the hour.

POJK has gained centre stage post the abrogation of Article 370 and Article 35A of the Indian Constitution and bifurcation of the state into two Union territories. The focus now is on resolution of the pending issues as highlighted by the Parliament resolution of 22 February 2022.

The incumbent NDA government in the centre has often hinted upon its resolve to amalgamate the Pakistan Occupied territories into Indian Jammu and Kashmir. In January, 2020, Indian Army Chief, General MM Naravane, said very clearly that the Indian Army was ready to take action to reclaim POJK if it receives orders to implement the resolution taken by the Indian Army in 1994. “We have our forces deployed all across the border, including J&K, and we have various plans, and if required, those plans can be put into action. We will carry out — and carry out successfully — any task that we are tasked to do,” said General Naravane.  External Affairs Minister S Jaishankar has also, on many occasions hinted that POJK is a part of India and “we expect one day we will have physical jurisdiction over it.”

Clearly the sentiment in India is to reclaim Indian territories that continue to be under forceful occupation of Pakistan. Prime Minister Narendra Modi is a leader of international stature, his word carries a lot of weight, it is time for him to use his goodwill to the benefit of the deprived people of POJK. He can raise their plight with world leaders during his meetings and interactions. It is time no to culminate the unfinished agenda of the partition.

(Jaibans Singh is a geo-strategic analyst and columnist)