You are here: Home / Icons of Punjab / Post Independence politics in India: Out of the frying Pan into the fire
Share 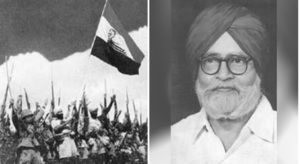 Not many in India remember Sardar Mohan Singh who was the founder of Azad Hind Fauj. When the British lost to the Japanese in World War II and surrendered in Singapore, Burma and Malaysia, most of the prisoners of war (POWs) were of Indian origin. The British negotiated for their white POWs and abandoned the Indian POWs. Even in the camps the British POWs got better treatment. The turbaned heads of Sikh soldiers were used for target practice by the Japanese.

In 1931,Mohan Singh had been selected as a potential officer and did his training in the newly formed Indian Military Academy (IMA), he was commissioned in 1935 and ultimately joined 14 Punjab Regiment again. During the war, Mohan Singh was serving in South-East Asia.

In Japan the Indian independence struggle, at that stage, was being spearheaded by Rash Behari Bose, an Indian revolutionary who had been involved in the Ghadar mutiny and had been forced to flee to Japan in 1915. He founded the Japanese branch of the Hindu Mahasabha under the inspiration of Vinayak Damodar Sarvarkar in 1938 and later the Indian Independence League. He gave to the Japanese the idea of making a militarized force with the captured Indian soldiers.

The Japanese then tried to reason with the Indian soldiers  to join them and turn against Britain for independence. Mohan Singh was motivated by Giani Pritam Singh and after some hesitation he accepted the offer and initiated the recruitment process with the support of Rash Behari Bose. A large number of Indian soldiers came forward to join the new set-up which was formalised on 01 September, 1942 when its strength touched about 40,000 troops. Mohan Singh assumed command and was designated General of this force. This led to the birth of Azad Hind Fauj, later renamed as Indian National Army (INA).

Unfortunately, the designs of the imperial Japanese were also sinister. Within no time after the formation of the Azad Hind Fauj, it became clear that the Japanese were not honest and their actual design was to replace British rule in India with Japanese rule. In other words, they wanted total control. This sowed the bone of contention and led to discontentment and decline. The situation was saved by some astute diplomacy by Subash Chandra Bose who was also seeking to establish the INA and had remained located in Germany for a long time to rope in support  from Hitler for Indian independence on the premise, ‘enemy of enemy is a friend’.

But either way, we would have replaced the British by another foreign force- either the imperial Japanese who were far most cruel at that time, or by Hitler whose genocide of the Jews was not hidden from anyone. It would have been far worse for Indians either way- like ‘from the frying pan into the fire’. 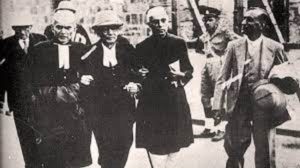 Destiny shapes history. The bombing of Hiroshima and Nagasaki made Japan reel on its knees and they withdrew support from INA causing total collapse of its rank and file. However, the threat and dent created by INA was obvious and irreparable. The British think tanks in London were aware of the possibility of a large scale mutiny by Indian forces. The vulnerability that the British felt was obvious during the proceeds of the famous INA trials in Red Fort, Delhi, where the British had to release the ‘traitor’ Indian soldiers despite assertions of ‘treason.’ The famous mutiny by Indian Naval soldiers put the final nail in the coffin. Also, at that time, Britain projected itself as a beacon of democracy and the Crown was on the decline, hence colonialism was now beyond any justification by the clever think tanks. The above factors made the British Labour government of Clement Atlee decide to leave India.

Unfortunately they left in a hurry. The partition of the sub-continent into two Nations caused more than 10 million avoidable deaths that could have been prevented with better planning and involvement of the army during the division.

Moreover, power was handed over in India by the British to those who least deserved it. The revolutionaries were forgotten. Far from being rewarded they were condemned. As time passed, the poor remained poor and the rich vassals who had served British interest prospered further. In the absence of land reforms, marginalised farmers became slave of the rich Zamindars (landlords) . Some took up arms leading to the Naxalite movement supported by Maoism of Mao Zedong.

India was ruled by opportunists who took over as a dynasty and systematically failed to reward the revolutionaries. Bhagat Singh’s family and many more died in poverty. Politicians became richer and fatter… again the fate of a common man was like- from the frying pan into the fire. Now, as the Nation celebrated its 75th Independence Day in the form of “Azaadi Ka Amrit Mahaotsav” it is time to also remember the revolutionaries like Sardar Mohan Singh and to take a new resolve to remove corruption and poverty in the Nation from its very roots.