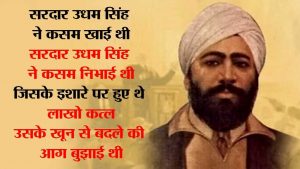 “I did it because I had a grudge against him. He deserved it. He was the real culprit. He wanted to crush the spirit of my people, so I have crushed him. For full 21 years, I have been trying to seek vengeance. I am happy that I have done the job. I am not scared of death. I am dying for my country. I have seen my people starving in India under the British rule. I have protested against this, it was my duty. What greater honour could be bestowed on me than death for the sake of my motherland?”

…….Saheed Sardar Udham Singh on the assassination of Michael O’ Dwyer on 13 April 1919

Udham Singh is an Indian revolutionary and freedom fighter. He avenged the Jallianwalla Bagh massacre of April 13, 1919 by assassinating Michael O’ Dwyer, who was the Lieutenant Governor of the Punjab when the massacre took place. Saheed Udham Singh waited for 21 years to take revenge and killed Michael O’ Dwyer in London’s Caxton Hall on March 13, 1940.

Udham Singh was born as Sher Singh on 26 December 1899 to a Kamboj family in Village Sunam in the then princely state of Patiala (presently Sangrur district of Punjab, India). His father, Tahal Singh Kamboj, was a railway crossing watchman in Upali village. Sher Singh and his elder brother, Mukta Singh, lost their parents at an early age; their mother died in 1901, and their father followed in 1907.After his father’s death, Singh and his elder brother, Mukta Singh Kamboj, were taken in by the Central Khalsa Orphanage Putlighar in Amritsar. As both brothers were initiated into Sikhism and received new names Sher Singh became Udham Singh and Mukta Singh became Sadhu Singh. After a decade in 1917 Udham Singh’s elder brother Sadhu Singh also died, leaving the 17 years old Udham all alone in the world. Udham Singh passed his matriculation in 1918 and left the orphanage in 1919, he learnt different arts and craft in the orphanage.

In the year 1919, there was popular resentment against the British building up in Punjab due to their ruthless recruitment of soldiers as well as forced contributions to the funds for World War I. In addition to this, the colonial government passed what became known as the Rowlatt Act, which extended and strengthened repressive wartime measures.

Mahatma Gandhi called for a country-wide Hartal (lockdown) to protest against the Rowlatt Act and received a tremendous response from the people of Punjab on April, 6, 1919 and again on April 9. The British administration in Amritsar, headed by Lt. Governor Michael O’Dwyer panicked.

On April 10, 1919, it arrested a number of local leaders like Satya Pal and Saifuddin Kitchlew for their protest against the Rowlatt Act.

The arrests met by widespread anger and discontent among the people of Punjab, with Amritsar erupting into violent riots between civilians and British troops. To restore order, the Punjab Governor handed the command of available troops to Brigadier General Reginald Edward Harry Dyer and commanded him to suppress the riots. Dyer unleashed a reign of terror that included torturing and humiliating people on the roads and banning gatherings. 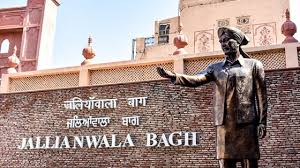 On April 13, 1919, more than 10,000 unarmed men, women, and children gathered at Amritsar’s Jallianwala Bagh (an open ground enclosed by walls on all sides and with only one exit). They had come from far and wide to celebrate the festival of Baisakhi in the vicinity of Harimandir Sahib. Most were unaware of the ban order passed by  Brigadier General Dyer.

Singh and his friends from the orphanage were at Jallianwala Bagh on the fateful day and were given the responsibility of serving water to the thirsty crowd. They were doing so when Brigadier General Dyer arrived with his troops, sealed off the only exit and gave orders to his troops to open direct fire on the unarmed, innocent civilians without giving any warning. Singh was 20-years-old at the time.

Deeply scarred by the Jallianwala massacre and full of anger against the British, Udham Singh got involved in the freedom struggle that was then unfolding both within  India and in foreign countries. In the early 1920s, he travelled to East Africa, where he worked as a labourer for a while before making his way to the USA. It was here, in San Francisco, that he first came in contact with the members of the “Ghadar Party,” a revolutionary movement organised by immigrant Punjabi-Sikhs to secure India’s independence from British rule. In 1927, he made his way back to Punjab by working as a carpenter on a ship travelling to India. The same year, he was arrested for the possession of illegal arms and for running the Ghadar Party’s radical publication, ‘Ghadar Di Gunj.’ He was jailed for four years till 1931 and, on being released in 1931, he remained under constant surveillance of the British police due to his close links with Bhagat Singh’s Hindustan Socialist Republican Association. He made his way to Kashmir, from where he used an alias to evade police and escape to Germany. From there he successively travelled to Italy, France, Switzerland, and Austria before reaching England in 1934. He took up residence at 9 Adler Street, Whitechapel (East London) and even purchased a motor car. While in London, he worked in various capacities like a carpenter, signboard painter, motor mechanic, and even as an extra in a couple of Alexander Korda films. All this while he remained obsessed with the idea of assassinating Michael O’Dwyer.

Singh never forgot the reason for which he had come to England. He knew the time had come to achieve his goal when he learnt that Michael O’Dwyer was scheduled to speak at a meeting of Central Asian Society and the East India Association in London’s Caxton Hall on March 13, 1940. On the day of the conference, Singh hid a revolver in his overcoat, sneaked into Caxton Hall and shot Michael O’Dwyer twice as he moved from the platform after the meeting concluded. He also managed to wound Lord Zetland, the Secretary of State for India, Sir Luis Dane and Lord Lamington. 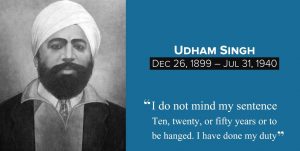 After the shooting, Udham Singh remained calm and did not try to flee or resist arrest and was immediately taken into custody. It is said that Singh chose a public place for his assassination attempt so that he could create a furore and draw attention to the atrocities that the British had carried out in India.

On 1 April 1940, Udham Singh Kamboj was formally charged with the murder of Michael O’Dwyer, and remanded in custody at Brixton Prison. While awaiting his trial, Singh went on a 42-day hunger strike and had to be forcibly fed. On 4 June 1940, his trial commenced at the Central Criminal Court, Old Bailey on 4 June 1940 before Justice Atkinson. He was represented by legal luminaries like St. John Hutchinson and V.K. Krishna Menon. When asked why he committed the broad daylight murder, Udham Singh, in his broken English stated that he bore a grudge against O’Dwyer and that he didn’t care about being put to death for the sake of his motherland. He further said that he had been seeking vengeance for 21 years and he was happy that he had finally managed to achieve his goal. He also expressed surprise that he failed to kill Lord Zetland who, he felt, also deserved to die. He expressed regret at having managed to kill only one person.

As was expected, Singh was convicted of murder and awarded a death sentence. After he was convicted, he made an impassioned speech which, however, was not allowed to be released to the press by the judge on the ground that it was not pertinent to the case. During his trial, Udham Singh gave his name as Ram Mohammad Singh Azad, which was tattooed on his arm, as a symbol that all religions in India were united in their opposition against British rule. Convicted and sentenced to death, Singh was hanged on July 31, 1940 at London’s Pentonville Prison and buried within the prison grounds.

In 1974, more than three decades after his death, Singh’s remains were exhumed and repatriated to India before being cremated at his birthplace, Sunam village in Punjab. His ashes were then scattered in the Satluj River, the same river in which the ashes of Bhagat Singh, Rajguru and Sukhdev had been scattered. A part of the ashes was retained and are now kept in a sealed urn at Jallianwala Bagh.