You are here: Home / Icons of Punjab / Akashdeep Singh, a proud son of Punjab, awarded “Sword of Honour in IMA
Share

Gentleman Cadet, Battalion Under Officer (now Lieutenant) Akashdeep Singh Dhillon has done Punjab proud by passing out from the 146th Regular Course of the Indian Military Academy (IMA) Dehradun with the coveted “Sword of Honour” on being adjudged the best all round Gentleman Cadet of the course.

Akashdeep achieved this top honour from a course comprising of 423 Gentlemen Cadets including 90 cadets from nine friendly foreign countries. With 25 Gentlemen Cadets passing out from Punjab, the state has the fourth highest number in the country to its credit, a big achievement considering the small size of the state. 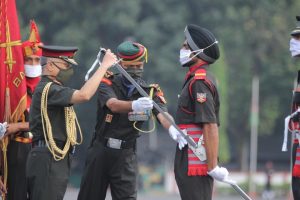 Lieutenant Akashdeep  Singh is a alumnus of Sainik School, Kapurthala, a noble institution of Punjab that has given many good officers to the Armed Forces with a considerable number rising to three star ranks. The school Alumnae is also found in other prestigious appointments and professions across Punjab and the rest of the country.

Lieutenant Akashdeep Singh passed out from the school in 2016 and joined the National Defence Academy (NDA) the same year for the three year course, followed by one year training in IMA as mandated. Now he is a commissioned officer of the Indian Army.

He is a proud son-of-the-soil from Kairon village in Tarn Taran district of Punjab. His father Gurpreet Singh is a farmer and mother Birinder Kaur a government teacher. His parents sent him to Sainik School, Kapurthala to fulfill his ambition of joining the Indian Army as an officer.

“Akashdeep’s achievement has added yet another feather into the hat of the school and will certainly motivate and arouse interest in Punjabi youth towards building their career in the Indian Defence Forces,” said Col Vikas Mohan, Principal, Sainik School Kapurthala,

“Akashdeep was an all-round sportsman in the school as he played volleyball at the national level and was also good at boxing. he was sports captain in the school,” said JKP Singh a spokesperson  of Sainik School, Kapurthala.

“The shining sword that Akashdeep was holding in his hands was like a dream,” said Akasdeep’s mother Birinder Kaur 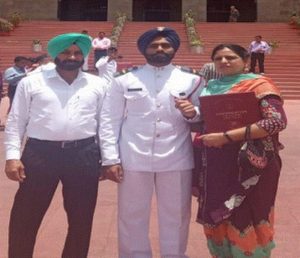 Akashdeep with parent on passing out from NDA

Akashdeep will be joining the elite Parachute Regiment of the Indian Army. Since the toppers get their choice of arms, this is what Akashdeep would have opted for.

The Punjab Pulse wishes Lieutenant Akashdeep Singh Dhillon and 24 other Punjabi boys who have recently been commissioned to the Indian Army the very best in their career and life. The Punjab Pulse also extols all Punjabi youth to go back to their traditional  roots and join the noble profession of arms. It does not matter whether you are an officer or a Sepoy, the armed Forces provide a noble and respectful career to all.