The Sikhs remember their terrible persecution by the Mughals and the Hill Chieftains, driven by  Lakhpat Rai, the Diwan (senior minister) of the Court of Lahore  as the Chota Ghallughara (The smaller Genocide). It took place in 3 Jeth 1746 that coincides with 16 May this year. 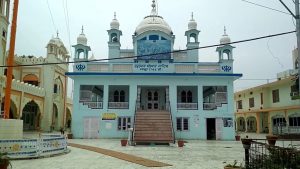 An estimated 7,000 Sikhs were massacred by the joint forces of the Mughals and the Hill chieftains on this day. About 3000 were taken prisoner, marched back to Lahore, paraded in the streets and publicly beheaded.

The operation was planned and executed by Lakhpat Rai, who was a Revenue Minister in the Court of Lahore to avenge the killing of his brother, Jaspat Rai, a military commander by the Sikhs earlier in the same year.

Lakhpat Rai  raised a call for Jihad against the infidels “Sikhs” and thus garnered the support of Yahiya Khan, the Governor of Lahore. He called upon the vassal Hindu states based on the Himalayan foot hills and succeeded in collecting a sizeable force of Mughals and Hill Chieftains.

First, on 10 March 1746,  the Sikh inhabitants of Lahore were rounded up and killed mercilessly. Then the force marched towards Gurdaspur where a body of Sikhs was concentrated in the for the swampy forest of Kahuwan.

The Mughal forces surrounded the swamps and pressed the attack with cavalry and cannons. The Sikhs stuck out ferociously, but were heavily outnumbered, under equipped and without adequate food and water. They attempted a courageous escape across the River Ravi and managed to reach the foothills, a 65-kilometre (40 mi) trek with the enemy in pursuit, only to find the armies of the Hill Chieftains waiting for them. Caught between these two armies and running out of food, the Sikhs suffered heavy casualties.

The Sikhs, however, did not lose heart, They once again broke the encirclement and re-crossed the River Ravi with the intention of seeking sanctuary at the Lakhi Jungle near Bathinda, some 240 kms away. Many, weakened due to the continuous fighting without food and water got swept in the River.

It is to their credit that despite the hot pursuit by the enemy, some did manage to reach to the safety of the  Bhatinda Jungles after crossing two more Rivers, Beas and Sutlej. The massacre was a big blow to the Sikhs who were as it is small in number, but, they rebounded with strength yet again.

Lakhpat Rai, in order to ensure total extinction of the Sikhs, ordered their places of worship to be destroyed and their holy books burnt. He decreed that anyone uttering the word Guru should have his belly ripped open. Considering that the word Gur, meaning Jaggery, sounded like Guru, he prohibited its use.

Lakhpat Rai ultimately suffered an ignominious death in the hands of the Sikh Dal Khalsa. Up to 1748 he remained in the good books of Ahmad Shah Durrani and continued to hold the position of Diwan. In March, 1748, however the Afghans retreated and Moin-ul-Mulk, commonly known as Mir Mannu, became the Governor of Lahore. Mir Mannu imprisoned Lakhpat Rai and demanded from him an indemnity of three lakh rupees which he was not able to pay. Diwan Kaura Mall, who had opposed Lakhpat Rai’s repressive policy towards the Sikhs, offered to pay. Lakhpat Rai was handed over to him and he further gave him over to the Dal Khalsa.  Lakhpat Rai was imprisoned and suffered extremely for his evil machinations against the Sikhs. He died a dogs death six months later in 1748.