You are here: Home / Areas of Study / Social & Cultural Studies / Commemoration of sacrifice of family of Guru Gobind Singh Ji by sleeping of the floor
Share 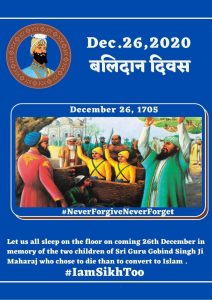 This week let’s revive our tradition of sleeping on the floor to commemorate the sacrifices made by Guru Gobind Singh Ji and his family for the sake of justice and humanity and especially the martyrdom of his two youngest sons, Baba Fateh Singh Ji (age 6 years) and Baba Zorawar Singh Ji (age 9 years).

The two boys were killed in the most barbaric manner by Wazir Khan, the Governor of Sirhind, under the orders of Aurangzeb, on 26th December, 1705. They preferred to embrace martyrdom rather than agreeing to convert to Islam.

Mata Gujri, their grandmother, who was captured along with them, died of heartbreak; she could not absorb the shock of the barbaric killing of her grandsons in her old age.

Till a few years ago, the entire Hindu-Sikh community of Punjab used to sleep on the floor, every night from 24th to 31st December, each year in memory of this Balidaan of the children of Guru Gobind Singh Ji and his mother Mata Gujri.

Let us revive that tradition and sleep on the floor on 26th December 2020  as a mark of respect and gratitude to these fallen children of our extremely respected Guru Gobind Singh Ji, and Mata Gujri.

Let us post a 20 second video on our social media on coming 26th December night , so that this tradition is revived globally within the Hindu – Sikh community.