DISCUSSION ON: MINIMUM SUPPORT PRICE FOR AGRICULTURE PRODUCE: THE POLICY AND ITS RAMIFICATION IN PUNJAB 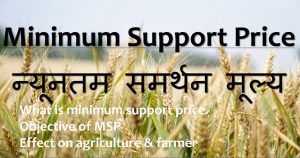 The proposed discussion will cover the following main aspects:-

(b)       Initiatives at the state and the national level to ensure adequate motivation through compensation to the agriculture sector.

Ordinances Passed by the Government

(a)          The Essential Commodities (Amendment) Ordinance, 2020, that amends the existing act to remove all agricultural commodities from the list of essential commodities.

(b)          The Farming Produce Trade and Commerce (Promotion and Facilitation) Ordinance, 2020, designed to promote barrier-free inter-state and intra-state trade and commerce outside the physical premises of markets notified under state agricultural produce marketing legislations.

(c)           The Farmers (Empowerment and Protection) Agreement on Price Assurance and Farm Services Ordinance, 2020, which provides for a national framework for agreements with the farmer by any third party. It is an enabling legal framework for contract farming.

(a)          In wheat production Uttar Pradesh leads with Punjab in second position.

(b)          In Rice Uttar Pradesh leads, followed by West Bengal and Punjab is in third position.

(c)           Area under cultivation in Punjab is much less than that in the other leading states, yet it competes.

(d)          MSP is a good initiative but only if the Government purchases itself which is not always the case.  An example is Makki (Corn) that has a MSP but not assured procurement by Government, hence the price goes down despite MSP. Farmers are being psychologically suppressed into selling short.

(e)          Land holding was greatly reduced due to land ceiling and now has gone down further to a stage now when they are too small even for viable cooperative farming.

(f)           Government run cooperatives are not very effective, they are mostly occupied in selling of fertilisers while they should be more involved in all inputs including seed and feed and also marketing.

(g)          In crops like Potato there is a cycle of one year earning followed by loss the very next year.

(b)          The agriculture models conceived over time have proved to be anti-farmer, anti-people and have led to the production of poison instead of food. There is a need to look at these models with “sustainability” as the key ingredient. Creating minimum income for the farmers is imperative.

(c)           Farmers and not companies should be centric to creation of these new models.

(d)          The responsibility of sustainable agriculture should remain with the government, it cannot be privatised.

(e)          Decisions need to be political centric since bureaucracy does not have much regard for social initiatives.

(a)          Farmers had to pay tax to sell their goods in other states. Now they would be free to go for inter-state sale since the Centre has invoked its right of marketing as given in the Concurrent List. The farmer, thus, has been given his fundamental right to market his goods as he desires and that too without impacting the MSP.

(a)          MSP decisions have to keep in mind the value put in by the farmers, inflation, losses due to multiple exigencies like natural calamities etc.

(b)          Since water is destroying crops, national connectivity of Rivers as conceived by Prime Minister Atal Bihari Vajpayee should be implemented

(c)           Since farmers are not educated enough to carry out grading packaging etc their age old relations with Aarthiyas (Agriculture produce traders) needs to be nurtured.

(d)          Market fees should be abolished since the money is not being used to create market infrastructure as it should. It is simply a cesspool of corruption.

(e)          Farmers who have generations of experience in their traditional occupation should be listened to more than the bureaucrats and white collared experts.

(f)           Direct sowing should give way to transplantation to save ecology

(g)          There is a need to find alternate employment for farming families so that economic sustainability is ensured.

(h)          Innovative alternatives like allotting districts to MNCs for production that is utilised by locally placed processing units should be considered.