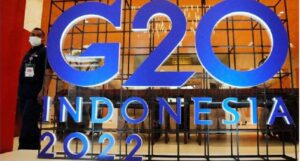 The 17th G 20 summit was  held at Nusa-dua convention centre, Bali, Indonesia on 15-16 November 2022. Post the summit, Indian Prime Minister Narendra Modi took over as the head of the organisation from Indonesian President Joko Widobo for next one year with effect from 1 December 2022. He had around 20 engagements over and above the main summit and also addressed the Indian Diaspora on 15 November 2022 .

During the summit, G 20 leaders  deliberated  upon key issues of global concern under the summit theme ‘Recover together, recover stronger.’ There were three working sessions as part of the summit agenda – first session focussed on Food and Energy Security, the second on Health and the last session on Digital Transformation. There were a number of bilateral meetings between leaders of member countries.

The most important bilateral interaction was held on 14 November 2022 between China and USA to defuse tension on the Taiwan issue. India PM and newly elected British PM Rishi Sunak also held a bilateral meet to discuss enhancement of investment and employment opportunities between the two countries.

The European Union highlighted the acute energy crisis and loss of human life due to Ukraine War and blamed Russia for the same. Ukraine President, in his virtual address, was seen spitting fire against the Russian offensive. He suggested to rename G 20 as G 19 minus Russia.

The foundation of G 20 was laid on 26 September 1998, almost 24 years ago, at Berlin, Germany, basically as a congregation of finance ministers of member countries. Initially, the FM level summits were held at ad-hoc intervals .The final shape of G 20 emerged in 2008, when it got global recognition and head of member states, with a delegation, were invited to the designated country. 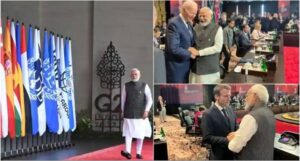 The first G 20 summit was held at Washington DC at United States under the leadership of George W Bush. Subsequent summits have been held at London, UK; Pittsburgh, USA; Toronto, Canada; Seoul, South Korea; Cannes, France: Los Cabos, Mexico; Saint Petersburg , Russia; Brisbane, Australia;  Serik Antalaya; Turkey; Hangzhou. China; Hamburg, Germany; Buenos Aires, Argentina and Osaka; Japan. In the year 2020, due to COVID, the summit was held virtually from Riyadh, Saudi Arabia. The next summit was Rome, Italy followed by the present one in Bali, Indonesia. The 18th summit will be held at New Delhi.

The G 20 is composed of the World’s largest economies both developed and developing. It accounts for 80 percent of the gross world product, 60 percent of land area, 60-70 percent of the world trade and 66 percent of the global population. The forum attempts , through task forces, to take out the nations suffering from a financial crises occurring due to War, recession, double digit inflation, heavy debt liability, pandemics and natural calamities. The various economies are on verge of collapse like Sri Lanka, Afghanistan, Iraq, Syria, and Ukraine are addressed by the forum. These are monitored towards revival by strict financial discipline and economic package.

A Chair rotation system is followed to select the head of the forum. The duration of the Chairman country is for one year and the Head of State takes over as President of the Organisation. The member countries are divided in to four groups. Group one consists of Australia, Canada, Saudi Arabia, USA. Group two has India, Russia, South Africa, and Turkey. Group three includes Argentina, Brazil, Mexico. Group four has all European countries; France, Germany, Italy, United Kingdom. Group five has all East Asian countries; China, Indonesia, South Korea ,Japan.

Another system followed is the concept of ‘Troika.’ To elaborate, India in 2023 will be supported by Indonesia 2022 and Brazil 2024 in the Troika.It is the responsibility of the host country to provide a secretariat for the duration of the tenure.

G 20 Summit is annually attended by all 19 members, EU, Spain, reps of ASEAN, two African countries detailed by the African Union and representatives s of the New Partnership for African Development (NEPAD). The host country can invite two members from its own region. The heads of UNO, WHO, ILO World Bank, WTO, OECD are also permanent invitees in the summit.

There has been wide criticism of the Group as being an exclusive club. It is also said that when Organisation of Economic Cooperation and  Development  (OECD) , a group of 37 countries exists and is functioning efficiently on same agenda then why have duplication of another organisation? In recent times, Russia has been the target of USA and other European countries. There was a demand for its expulsion in 2014 when it annexed Crimea but it was ruled out. USA and its allies again wanted to unanimously strongly condemn Russia, China and India have opposed the proposal . Norway and Poland also want to be member and question the special status of Spain.

In spite of the criticism, G20 stands tall and firm as a strong, relevant and important international forum that has the potential to defuse bilateral fissures between belligerent nations and strengthen world peace and prosperity.

Prime Minister Narendra Modi, while  addressing  the forum said that the theme during the Indian presidency will be “One Earth, One Family ,One Future,”  based on the Vedic philosophy “Vasudhaiva Kutumbakam ” which underlines the message of equitable growth and a shared future for all. He emphasised that Ukraine war must be stopped with joint efforts for the sake of world peace and prosperity. He further stated that the whole world is watching G 20 with new hope and the need of the hour is for the forum to be decisive  and inclusive while working for world peace and balanced economic development.