You are here: Home / Areas of Study / National Perspectives / Indian Army : The Pride of Soldiering
Share 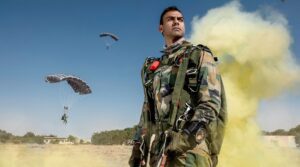 Leadership is an art and not a science because leaders convert defeat into victory.  Military Leadership is at the highest pedestal of leadership because  leading men into battle is a privilege given to a select few. From times immemorial,   Indian Armed Forces have had a saga of finest military ethos and values, so essential for victory in battle.  It’s an awesome responsibility to train, motivate and lead your men to victory when both, the officer and the men he leads, are aware that some of them may not come back alive. Military service to the nation is, therefore, a tradition of bravest of brave. Since the inception of our country, Indian Armed Forces have defended the nation primarily by the dedication of its soldiers. The country, proud of it’s soldiers, certainly appreciates their basic values like discipline, integrity, loyalty, patriotism, selfless service and courage.

Ethics, Values and Moral are the binding force of a soldier. The best example of leadership values comes from the great epic ‘Mahabharata’. Those days kings were also the military leaders. After the war was over and Pandavas were victorious, Lord Krishna took the King Yudhistra and his brothers  to  great warrior ‘Bhishma Pitamah’, lying on a bed of arrows,   to learn some lessons in  ‘Rastra Dharm’ and ’Principles  of Leadership’.   ‘Bhisma Pitamah’ gave them three advices-

His views on leadership articulated thousands of years ago, continue to be relevant even today. Fast forward, 5000 years to Indian Military Academy where the Gentlemen cadets complete their training and take the oath as Officers. The Chetwode motto, given by General, Sir Philips Chetwode. Commander-in-Chief, India in 1932, during first ‘Passing Out Parade’ of Indian Military Academy,  is etched in hearts of all officers, till date and remains the guiding principle throughout their military career.  The Chetwode Motto is-

“The safety, honour and welfare of your country come first, always and every time.

The honour, welfare and comfort of the men you command come next.

Your own ease, comfort and safety come last, always and every time.”

There are striking similarities between what ‘Bhisma Pitamah’ said and what ‘General Phillips Chetwode’ has laid down. The ethos and value system of military leadership remains same from Mahabharat till date.

The Army reflects the character of the nation’s heritage, values and culture. The army ecosystem has to be in harmony with the society to co-exist and yet be the beacon of hope for all . The  concept  of  duty,  service,  and  self-sacrifice  has  always  been  associated  with  military  leadership.  The sacrificial content of the leadership ethos built up over decades has served the country well and the military was able to  maintain the  general  perception  of being  trustworthy professionals. While  ethics is  related  to  long tradition  & social  values,  morality  is  linked  to  personal  belief.  These  three  words  of  Ethics,  Moral  and Values  are  the binding  force  of  a  military man.

The moral principles of the Army Ethic and the Army Values inherent within it have always existed and been a point of introspection amongst the members of the ecosystem. Over the years, the Army has repeatedly examined and articulated   institutional values and working ethos in the rapidly changing socio-economic environment of the country.  This evolution to be the best, at all times,   continues even today.

The Warrior Ethos.  The warrior ethos form the heart of the military profession and operational effectiveness. The Indian soldier is amongst the best in the world because he too is imbued with the qualities of putting country above all else. He follows his officers unquestioningly and undergoes great discomfort in unbelievably difficult circumstances without complaint.    The ethos of the armed forces are  the essence of life  for  its members and inspires them to carry out extraordinary acts of courage.  There are certain qualities of head and heart that separate the man in ‘Olive Greens’ from the rest of the world. Some of these that set them  apart are flagged as under-

The Army Values.    The defining character of Armed Forces; entrusted with the security of our nation, is built upon an intrinsic value-based system. Essential qualities of professional commitment, loyalty, duty, respect, selfless service, honour, integrity and  personal courage  emanate from this ecosystem and ethical conduct of soldiers is  driven by this value system.  Soldiers learn these values in detail during Basic Combat Training (BCT), from then on they live with them every day.

The 21st century, is being labeled as the information age. With revolution in military technology, future conflicts will also face a great challenge of virtual warfare. The typical ‘hand to hand combat’  will be the last phase of any battle or may also be reduced to miniscule level. The advancement of Missile technology has enabled targeting beyond thousands of km, with ICBMs having ranges between beyond 6000 km and capable of hitting any target in the world. The capability of the Air Force is being proved in Iraq, Kosovo, Afghanistan and Ukraine war,  wherein thousands of people have been killed due to aerial bombing without loss of a single pilot. The recent killing of Al-Qaeda Chief Ayman al-Jawahiri by a drone fired missile, is a technology demonstrator.

The changing nature of warfare, equipped with ‘Robots’, Artificial Intelligence (AI) and Machine learning as well as the expansion of national interests well beyond geographical boundaries, due to economic interests, have placed fresh challenges on soldiering. The  strategic aim in future conflicts will be  to subdue the enemy without fighting. Interestingly, We will be  killing the enemy without seeing it, an eye to eye. Thus, the context of Ethics, Morale, and Values of military leaders and soldiers will be defined in a new  dimension and they are expected to bring major changes for military commanders at all levels.

As India emerges to find its rightful place in the world, the Indian Army will continue to be pivotal towards building a strong, modern and resurgent India. Its  ‘Nation First’  ecosystem  built upon the   ethos of a secular, motivated, apolitical and professional force   remain the  pedestal of national growth and prosperity. The Indian Army has a long and illustrious record; it has excelled both in war and peace;   ensuring security against internal and external threats. While we have an enviable record, the future will demand increasingly higher levels of professionalism. The respect, dignity, wellbeing and stature of its soldier in turn must thus be preserved and garnered by the nation.

Human resource is precious in Army because it’s the man behind the machine that wins war. Creating an environment for learning and growth to excel in war and peace is the primary function of all commanders at each level. If the nation doesn’t invest in motivating and raising the morale of it’s soldiers, it’s sliding on a path of disaster. A good example of unmotivated soldiers is ’Bangla Desh War’  where 93000 soldiers having arms, equipment and rations to fight for six months, finally surrendered because they lost the will to fight.     On this 75th Army Day, let us join hands to applaud the efforts of great ‘Indian Armed Forces’ who made it happen.

I am a warrior; fighting is my Dharma.

I will train my mind, body and spirit to fight,…..

……God give me strength that I ask nothing of you