You are here: Home / Areas of Study / Governance & Politics / Pakistan Army: In the eye of the storm within Pakistan
Share 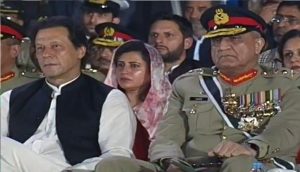 Imran Khan and Bajwa: In the eye of the storm

A political logjam capable of ushering winds of change in Pakistan is becoming visible. The opposition has joined hands against the incumbent Imran Khan led government. The situation may well lead to a constitutional deadlock.

The Pakistan Army, interestingly, is in the eye of the storm. The opposition is using Imran Khan to target the Army, and particularly, the Army Chief General Qamar Bajwa and his ISI head Lt. General Faiz Hameed. The ISI chief, incidentally, is a known favourite of General Bajwa. He was deeply involved in the rigging that brought Imran Khan into power. Such is his clout that he has replaced Lt. General Asim Munir who had been appointed only eight months earlier. Quite naturally any attack on General Bajwa would be incomplete without including his trusted hatchet man.

The opposition roller-coaster started with the 11-party opposition conglomerate, the Pakistan Democratic Movement (PDM), carrying out a three-month long, six-city public protest tour. During one of the rallies held in Quetta on 27 October, former Prime Minister Nawaz Sharif initiated a sharp attack directly on the Army Chief. “General Bajwa, you will have to answer for record rigging in 2018 elections, for horse-trading in Parliament, for making Imran Niazi against people’s wishes [by] tearing apart the constitution and the laws, for pushing people towards poverty and hunger,” he said. He also accused the ISI chief of “interfering in politics for several years with Impunity.”

Significantly, in this instance, the country’s leading and respected newspaper, Dawn, specifically reported Sharif’s statement against the two officers, which is a departure from the normal media practice of glossing over whatever is said against the Army and its hierarchy.

Such strong, incendiary words have never been said publicly in Pakistan and the Army is quite worried. It is reported that General Bajwa and Lt. General Faiz Hameed have been meeting key opposition leaders and asking them to desist from dragging the Army into politics.

Imran Khan, the eternal lapdog of the establishment has also been hitting out against the opposition for targeting the Army. “The former prime minister is trying to stir up a rebellion in the Pakistan Army by alleging  [that] it is involved in politics and calling for changing  the army chief,’ he said in a rally at Khyber Pakhtunkhwa. He also slammed Maryam Sharif for accusing the Army of interfering in politics. 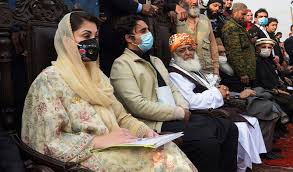 Nawaz Sharif, however, has refused to be intimidated. His party, the PML (N) hosted a massive Jalsa (rally) at the Minar-e-Pakistan, Lahore on 13 December for all constituents of the PDM. Imran Khan attempted to scuttle the rally but failed to do so. In the meeting, Nawaz Sharif once again made a frontal attack on the Army during. “Due to the massive rigging in 2018 elections, Imran Khan was installed into power so that he could be easily dictated. Time has come to get freedom from this selected set-up,” he said his speech telecast from London via video link. He further accused General Bajwa of ousting him and the Army of having become “a state above a state.” Other leaders also joined the rhetoric by saying that the various elements of the state should function within the “limits of their own jurisdiction.”  The President of the PDM, Maulana Fazlur Rehman, openly urged the ‘establishment’ to stop meddling into the politics and let the leaders chosen by the people govern the country.

Imran Khan, with assistance from the compliant media, attempted to project the Lahore rally as a “flop show.” The PDM, however, is in a high state of morale. It has already announced its intention to march to Islamabad in February, 2012. This would be the culminating point of a huge political initiative to bring down the Imran Khan led government along with General Bajwa and his ISI stooge. The opposition is also aware that if they are unable to get the resignation of Imran Khan they will be left with no option but to tender their own which, in turn, will create a constitutional crisis.

The overall reputation of the Pakistan army is also taking a hit because of burgeoning cases of corruption within its ranks. The people are quite upset with officers like Lt. General Asim Bajwa, Chairman of CPEC authority, whose assets running into billions of Dollars have been exposed by a journalist named Ahmed Noorani. Another name doing the rounds for corruption is Lt General Azhar Naveed Hayat Khan. The Corps Commanders of the army are referred to as “Crore Commanders” in view of the large wealth they accumulate while in service and out of it.

The PDM has, notably, given a national platform to regional parties and provincial leaders from Balochistan and Khyber Pakhtunkhwa, who have used it to target the Pakistani army, to demand regional autonomy and an end to repression. In Lahore, Baloch leader Akhtar Mengal narrated implicitly the death and misery being inflicted upon his people by the Pakistan army.

The Pakistan army will use each and every trick in its book to suppress the “open revolt” of the civilians against its authority. It could make a scapegoat out of Imran Khan by putting all blame of misgovernance upon him and removing him. This however, will leave for the Army a political vacuum that will be hard to fill. It could opt to take power in its own hands; this too is not a good idea since public mood is quite negative due to sustained economic hardship which will make governance difficult. The third option is to create trouble against India and increase the threshold of militancy and terrorism within Pakistan in order to divert attention. This is the most promising and time tested option. Hence, India needs to remain alert.  What is quite certain is that an unprecedented situation is emerging in Pakistan where the fight against hegemony of the Pakistan Army has entered the decisive level. The wave has started but its momentum can be maintained only by great resolve and iron will.