You are here: Home / Agriculture / With anger and a song
Share 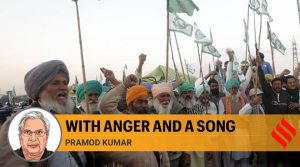 The farmers’ agitation is unique in many ways. One, it is a coming together of 31 ideologically competing organisations. Two, it has successfully purged itself of the influence and interference of the established political parties as reflected in the popular song, “Kithe kithe paye aa vande, kedi party de kede jhande, O vota paake khaave dande, O bholeya jatta samajh agende (We are divided under different party flags, you vote only to get beaten up; All you innocent people, arise and understand their real agendas)”. Three, the movement goes beyond the Kisans, as there is a broad-based engagement of the Arhtiyas, small shopkeepers, landless labourers and social and cultural activists.

The support lent by families and women is striking. In my interactions with the families of the agitators in the Malwa region of Punjab, the women, particularly, were expressive. For a Punjabi, land is not only an economic asset, but a lifeline and status symbol. Many women exhorted their men, “Go and fight; we will look after the house and the land till you come back victorious.” This sentiment is also reflected in song — “Khet tere eh khon nu firde; Jo tu paddre kite anter naal (These corporate are eyeing your land, which you have cultivated with hard labour).”

Anger against the central government was visible amongst the farmers, Arhtiyas and their families. The extent of the anti-Centre feeling revived echoes of the time of the Emergency in the 1970s. This is expressed in another song: “Khichla jatta, khich tyaari, pecha pai gaya Centre naal (Pull up your socks, as we have locked horns with the Centre)”.

Even the traders and the Arhtiyas, who have been staunch supporters of the BJP, have expressed their anguish against the new farm laws. Social activists, youth and the local singers and artists in the region have been actively involved in the current mobilisation: “Oh akla waleo chak lo kalma; Maar len na riflan saanu (Pick up your pens, before the men with rifles act)” — a call to the intelligentsia to use their pen as a weapon and shield for the farmers. Several writers, artists, singers and others have come forward and returned their state honours in protest.

Why is the anger so pronounced in Punjab?

Punjab has been the food bowl of India. It has largely showcased a seller’s market. All these years, Punjab has contributed the largest amount of food grain in the central pool. However, in 2020, Madhya Pradesh contributed 129 lakh metric tonnes (LMT), while Punjab’s share was 127 LMT of wheat; Punjab lagged behind Madhya Pradesh. The Punjab farmers see this as the outcome of an unlevel field. They point out that the Punjab farmers are being asked to diversify their cropping patterns whereas other states like Madhya Pradesh and western Uttar Pradesh are encouraged to produce grains. Why are the farmers in these states not being supported to diversify to commercial crops, they ask.

Punjab and Haryana receive more than Rs 80,000 crore in Minimum Support Price (MSP) every year. Not only is the livelihood of the Kisans and their families, but also that of the traders, shopkeepers and other beneficiaries dependent on this. According to data, only 6 per cent of the farmers in India are fully covered by the MSP, and 84 per cent are located in the states of Punjab and Haryana. Therefore, the possible withdrawal of the protective cover of the MSP is seen as an act of betrayal here. The argument also is that Punjab was initially used to fight hunger in the nation and the farmers of this state worked hard to do so against all odds while other states were taking advantage of the industrial and information technology revolution. As a result, Punjab lagged behind and has remained a predominantly agricultural state.

In other words, the farmers of Punjab feel that from a sellers’ market they are now being pushed into the buyers’ market. And it would obviously be left to the discretion of the Central government to decide on the quantum of procurement on the declared MSP. Also, taking agriculture out of the Essential Commodities (Amendment) Act will not only legalise, but legitimise, the private players’ procurement of food grain at prices lower than the fixed MSP. In other words, nearly 86 per cent of farmers, who are small and marginal, would be left at the mercy of the corporate houses, with reduced collective bargaining capacity. 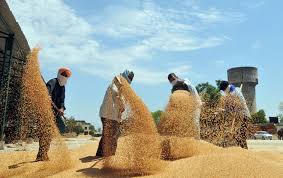 The Central government’s argument is that these Acts are intended to empower the farmers and ensure doubling of their incomes. Farmers’ organisations are critical of these laws as they believe that they will lead to the privatisation of agriculture, reduce agriculture to a subsidiary activity, make way for removing the protective cover of government-led procurement, MSP, Agriculture Produce Market Committee and other safety nets.

The reality is that the free market does not have the solutions to improve the well-being of people living on the margins. The assumption that the market shall protect and multiply farmers’ income is misleading. The new farm laws have direct implications for the livelihood and survival of the people engaged in or dependent on agriculture, food security of the poor and food sovereignty of the country. No doubt, with these laws, agricultural operations may become more efficient, but they threaten to lead to the marginalisation of the farmers. In other words, agriculture may flourish, but agriculturists could perish.

Being a surplus agrarian state, Punjab needs to sustain high levels of farm incomes with effective market support to sustain the livelihoods of 50 per cent of its population that is dependent on agriculture. If the government wants to procure less, let the farmer be compensated under the World Trade Organisation (WTO) compatible blue box. For this, the Centre could allocate subsidies for diversification to commercial crops for the farmers of Punjab. This subsidy could be given for three consecutive years. To keep the Mandi system functional, the APMC Act may be reformed, the state governments permitted to collect Mandi fee and Arhtiyas given handling charges.

Outsourcing agricultural operations to the big corporate houses and legitimising contract farming amounts to a virtual abandonment of the Prime Minister’s Atmanirbhar Bharat project. The market works for those whose signals it can hear, but the voices of the poor farmers remain inaudible. It is pointless to hope that the market will accomplish what it was never cut out to do.

(This article first appeared in the print edition of Indian express on December 8, 2020)