You are here: Home / Agriculture / Wastewater treatment a must for food safety
Share 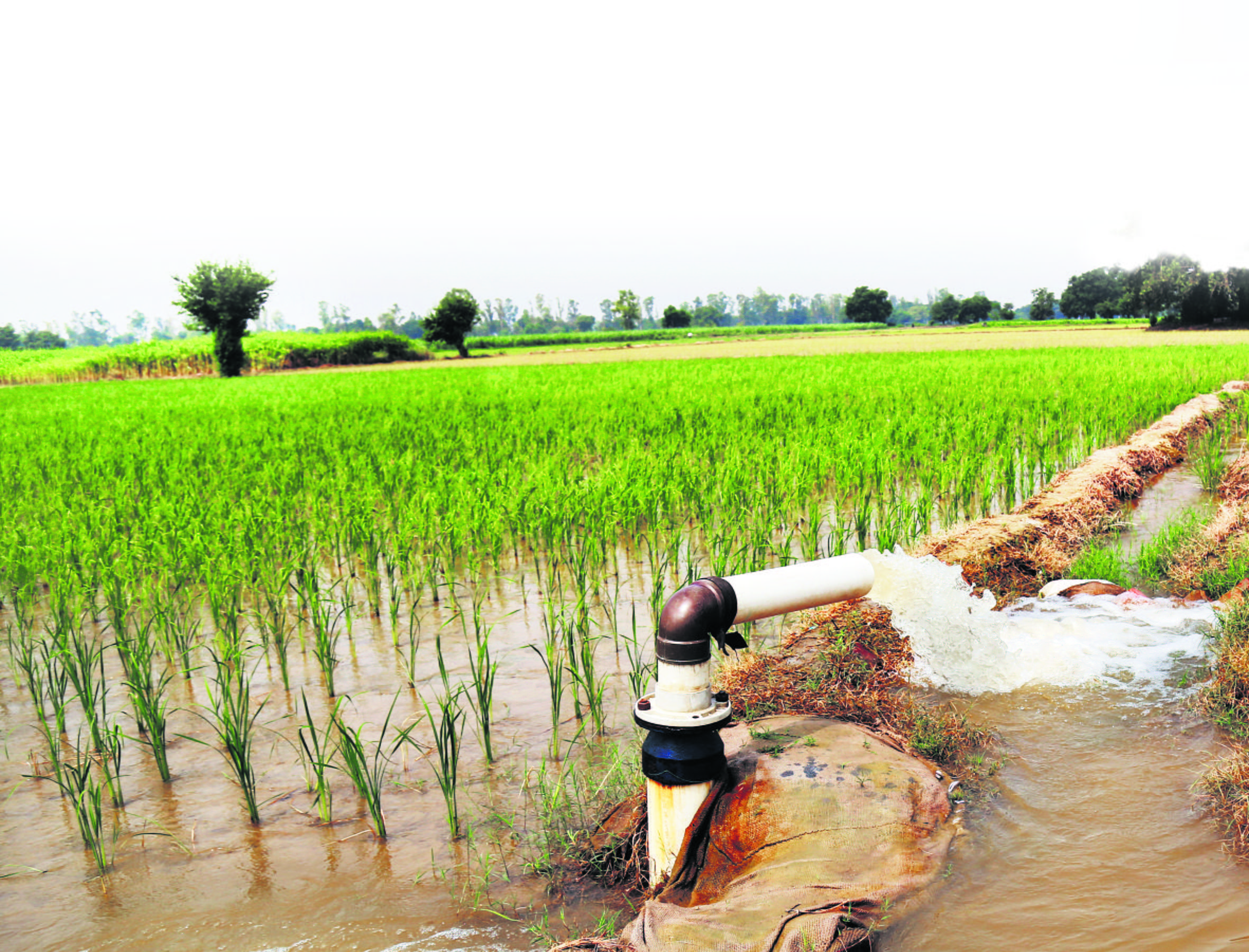 THE fast-paced demographic changes and lack of awareness regarding hazards of wastes are adversely impacting water, soil, air, plants, food, feed, animals and humans. Urban and industrial sectors in India generate large quantities of solid wastes and wastewater, which are rising exponentially. Depending upon the source, wastewater may contain toxic elements — lead (Pb), cadmium (Cd), nickel (Ni), chromium (Cr), aluminium (Al), cobalt (Co) and cyanide (CN); essential plant nutrients — nitrogen (N), phosphorus (P) and potassium (K), zinc (Zn), iron (Fe), copper (Cu), and manganese (Mn); and pathogenic microorganisms. Treatment of industrial wastewaters and sewage sludge is mandatory in India. Effluent treatment facilities for individual and clusters of industries are constructed in cities and towns for primary, secondary and tertiary treatment to remove toxic substances and kill pathogens. However, disposal of untreated industrial and urban wastewater into surface drains, underground water-recharging tube-bores, water bodies and for irrigation of field crops is common. Thus, toxic substances and perilous pathogens present in untreated effluents pose great health hazards to animals and humans through the soil/water-plant-animal-human continuum. The most important sources of water pollution with regard to human activities are urban and industrial wastewater.

Punjab Agricultural University (PAU) studies have shown the concentration of potentially toxic elements in wastewaters being several-fold higher for industrial cities (Ludhiana, Jalandhar and Amritsar) compared to less or non-industrial cities (Sangrur and Abohar). Further, sewage water from the domestic zone contained lesser toxic elements. In wastewater from electroplating industrial area, the Cr, Ni and CN concentrations were much higher than maximal tolerable limits for disposal on agricultural lands.

Two case studies from Ludhiana’s open drain Buddha Nullah and Jalandhar are conspicuous. The Buddha Nullah carries nearly clean water before entering Ludhiana. When travelling 15 km through the city, an increasing number of industries pour untreated wastewater that increases concentration of toxic metals manifold to make water almost like poison. The concentrations of Pb, Cr, Cd and Ni in wastewater at the city end, respectively, were 21, 133, 700, and 2,200 times higher than those in deep-tubewell water. Similarly, the concentration of Cr and Al in its water increased manifold after receiving the wastewater from the leather-manufacturing factories in Jalandhar city. Buddha Nullah, Kali Bein (historic rivulet turned into a sewer drain around Sultanpur Lodhi and Kapurthala) and several other drains eventually merge with Sutlej and Beas rivers, thus polluting their fresh waters, which are used for irrigation and drinking in Malwa region of Punjab, and Rajasthan. Industries often drill deep tube-bores for disposal of their wastewater on or near their locations. Experts point out that this practice of so-called ‘charging ground aquifer’ actually pollutes the natural and clear water. One PAU study revealed that the concentrations of Pb, Cd, Ni and Cr were significantly higher in shallow hand-pumps’ water samples located within 200 metres of Buddha Nullah than deep-tubewell water, and were several-fold higher than the permissible drinking water standards. This is one of the main reasons for more and more groundwater becoming unfit for animal and human consumption, and in some cases for irrigation.

A PAU investigation showed that bioavailable concentrations of Pb, Cd and Ni in surface soils, largely irrigated with sewage water, around densely industrialised area of Ludhiana were much greater than in the soils around a less industrialised city, Sangrur, 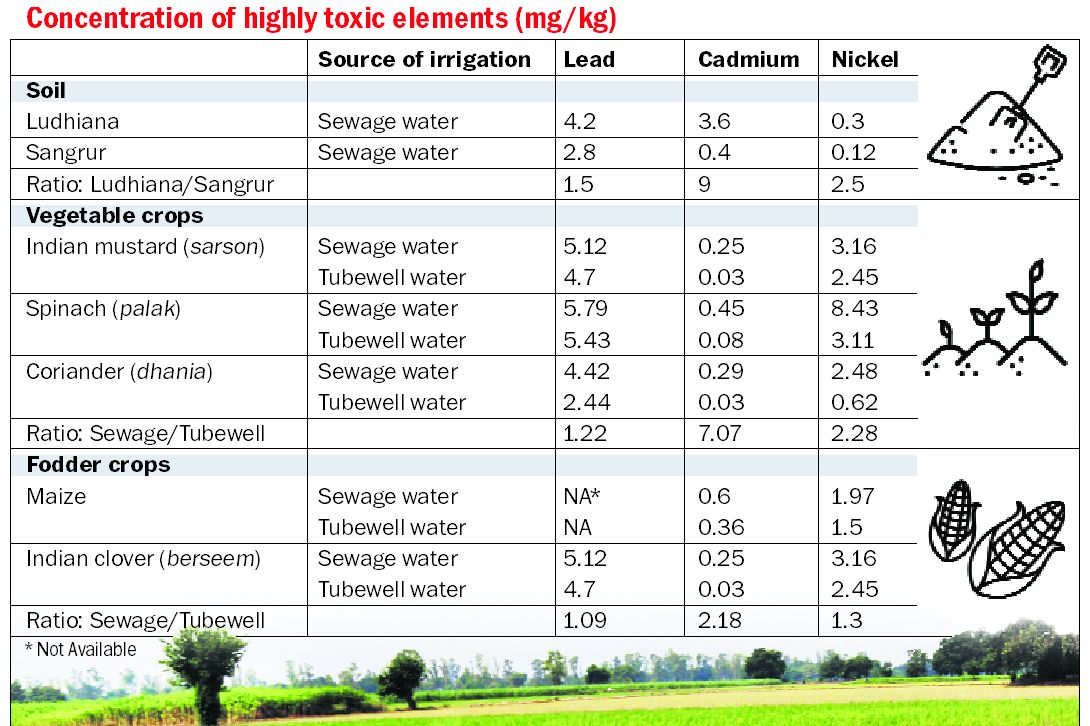 Growing vegetable and fodder crops using wastewater is a common practice near cities. These could cause toxicity in humans (consumption of vegetables) or animals (fodder) and subsequently in humans consuming milk, meat, etc. In a PAU study, the concentration of Cd in aboveground parts of maize, rapeseed (sarson & toria), pearl millet (bajra) and lady’s finger (bhindi) was 2-3.5 times higher when grown in polluted than non-polluted soils. The Ni concentration in various crops was 16% to 136% higher in wastewater-irrigated than tubewell-water irrigated crops.

Well-developed technologies are being used to treat wastewater for ensuring its good quality before use in several countries. In Europe and North America, water is generally pumped out from nearby water bodies (river, streams and lakes), cleaned and supplied to the cities and industries. Then, wastewater is treated before use for irrigation and excess is released to water bodies. But in India, open sewage-water drains pollute the shallow groundwater of hand-pumps and tube-wells installed in their vicinity. Wastewaters of industries and cities must be efficiently treated, by considering both useful (nutritive and irrigation potential for crops) and harmful effects (toxic substances and pathogens) to meet requisite parameters, before they are discharged to drains or used for irrigation.

Untreated industrial and sometimes domestic wastewater usually contains potentially toxic elements in concentrations several-fold higher than the maximum permissible limits for irrigation and drinking water. The authorities have so far failed to effectively enforce the waste treatment laws, and strict adherence to the norms has remained a daunting task.

Proper processing and management would lead to a win-win situation by upcycling and reusing of wastewaters and minimising environmental damages. It will also improve food quality and safety as well as human and animal health. Future food security, quality of food and feed, soils, animals and humans will depend on safeguarding our land, soil and water resources.