A well known Punjabi singer, Shubhdeep Singh Sidhu, popularly known as Sidhu Moosewala, was brutally murdered in broad day light on May 29 in District Mansa of Punjab. Moosewala  hailed from the village Moosa in Mansa. His father Balkar Singh is an army veteran and his mother Charan Kaur is Sarpanch of the village. He studied at Guru Nanak Dev Engineering College, Ludhiana and graduated in Electrical Engineering in 2016. His heart, however, was in music and his parents organised requisite training for him from a young age. He chose to pursue music as a career and, starting as a songwriter, went on to become a rapper and an actor. He was quite popular in India (especially Punjab), Canada, the United Kingdom and other foreign countries despite his rather controversial style of lyrics. His fans, mostly young boys and girls, are dismayed and grieved by his death.

Moosewala was not new to controversies, mainly because he popularised gun culture and violence through his songs. In one particular song he even eulogised Jarnail Singh Bhindranwale and supported the Khalistan movement. He is said to have had enmity with many other singers and anti-social elements. At the time of his death he had four criminal cases registered against him.

Despite his notorious credentials he was invited by the Indian National Congress to join the party. He fought the elections on a ticket from the party from the Mansa constituency, but was defeated conclusively by the Aam Aadmi Party (AAP) candidate Vijay Singla, with a margin of 63323 votes.

A spate of gruesome murders and other violent incidents have taken place ever since the AAP led government has been formed in Punjab. Apart from Moosewala, among those murdered are international Kabaddi players like Sandeep Singh Sandhu who was killed in broad daylight on 15 March and Dharminder Singh who was shot down on 7 April.

This apart, an incident of violence in Patiala, Punjab, in which two groups from different religions clashed outside a Mandir (Hindu temple) sent alarm bells across the state that prides itself for its inter-faith cohesiveness.

A few days after the  murder of Sidhu Moosewala , on 1 June, three armed men looted cash at gunpoint from a PRTC bus conductor near a toll plaza (Ladhowal) in Punjab.

The people of Punjab are, quite naturally, deeply disturbed by these incidents; there is a pall of fear and uncertainty. The overwhelming perception is that the incidents are occurring because of an inability of the incumbent AAP Government  to properly handle the law and order situation. 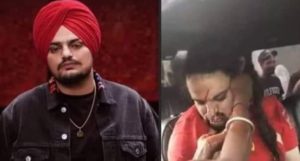 Whenever a new dispensation takes charge it tightens security mechanisms. The AAP government did exactly the opposite; it started a witch hunt against political detractors like Kumar Vishwas, Tajinder Bagga and Alka Lamba residing in Delhi, out of the jurisdiction of the state,

In a second ill-advised initiative, it ordered withdrawal of security of a large number of political opponents and diverted the assets to its own leadership, including the party convenor Arvind Kejriwal who is neither authorised nor in requirement of the huge 90 security personnel detail that has been given to him. Similarly a Rajya Sabha Member of Parliament from the State, Raghav Chadha, was also given a huge detail of 45 security personnel.

The arbitrary manner in which the government, especially Chief Minister Bhagwant Mann who also holds the Home portfolio in the state, directed the security management left the police force confused and troubled in its functioning.  The weakness was noticed by the many detractors within the state as also enemies sitting across the border and they wasted no time in attempting to exploit the same. This led to the spate of violent activity and other law and order issues that the state is facing.

Chief Minister Bhagwant will have to set a personal example of propriety and give full freedom to his police force to take appropriate action to quell the rot. Only then will the cycle of violence be suppressed. Advice to this effect is being given to him by all other political parties, especially the BJP, but it is not being heeded. Bhagwant Mann has succumbed to the higher national ambitions of his boss Arvind Kejriwal and, as a consequence, has been reduced to being a financer and small time campaigner for his party instead of being chief minister of a sensitive border state like Punjab.

It is said that the gangster and gun culture in Punjab is the outcome of songs extolling violence that modern singers of the state are singing. This is partially true but not the biggest reason. Gangs in Punjab have potential of earning huge amounts through  the drug racket, sand and land mafia, abduction/extortion and creation of political upheaval at the behest of internal and international anti-national elements. The youth join these gangs, like the one led by Lawrence Bishnoi, for some excitement , sense of power and easy money.

The menace can be challenged only if the Government is strong and civil society is committed to bringing about a change. While the weakness in the government has been discussed earlier it is also necessary to dwell on the role being played by some significant religious organisations in propounding the gun culture. Recently the Jathedar of Akal Takth, Giani Harpreet Singh, publically extolled Sikhs to procure licensed weapons for “self-protection.”  Is this not ample encouragement for the youth to pressurise their parents into procuring weapons for them? As it is Punjab has an unusually high concentration of weapons of all kinds due to a liberal policy of granting licences followed by earlier governments. Whether the AAP government will bring about a change in the policy remains to be seen.

As a border state, Punjab holds special significance in the overall security of the Nation. Pakistan is always on the look out to exploit security vulnerabilities in the state as it is doing now on multiple levels. Surely, it is the main conduit from where huge amounts of money and weapons are  being provided to the “gangsters” to engineer violence, disruption and divisiveness at multiple levels. Reigniting the bogey of “Khalistan” that has been overwhelmingly rejected by the people of Punjab is definitely a part of this devious plan.

Proliferation of violence and divisiveness poses an existential threat to the ancient civilisation of Punjab. It is critical for the state and its people to stay vigilant and crush the threat with all the strength at their disposal . The state government should look at security from a prism that is above politics. The chief minister should not countenance interference, even from his own party, in the sensitive matter of security and instead work seamlessly with the centre in ensuring that peace in the state is not disrupted. He can rest assured that the Union Government will give him complete, apolitical support as it gave to the Congress government, which has been openly acknowledged by former chief minister, Captain Amarinder Singh.

In this sensitive issue, the chief minister should also seek support  from the people including the parents, elders, teachers, academicians, right thinking religious and political leaders and parties in opposition among others who should come forward to render support willingly and without inhibitions. It is a fight for survival of Punjab and every Punjabi needs to be a positive stakeholder in the same.