In the world of today, information has been identified as the biggest asset; it  is utilised by Nations for creating beneficial narratives on the one hand and dissension within inimical domains on the other. Authoritarian regimes are masters in the use and misuse of information. It is so because they can ensure full internal secrecy and simultaneously apply underhand means to gather external information and use it to their advantage.

China has taken the front seat in this ignominious activity and become a master in Propaganda. It has gained more proficiency than Russia and Germany who have held top positions earlier.  Propaganda, when applied to engineer adversarial  acts against India, holds special significance for China and follows in letter and spirit the famous quotes of their strategist Sun Tsu, “Supreme excellence consists of breaking the enemy’s resistance without fighting,” and, “The greatest victory is that which requires no battle.”

Information Warfare is carried out through the People’s Liberation Army Strategic Support Force (PLASSF). It is used to influence and intimidate in equal measure. The concocted mind games aim at sowing seeds of self doubt within the Indian polity.

China has a huge array of multimedia tools to carry out “Information Operations.” It leverages online operations, audio visual productions and of course the traditional media of newspapers and television news channels. It reportedly controls more than 3,000 public television channels in the world, over 150 pay TV channels, around 2,500 radio stations, about 2,000 newspapers, 10,000 magazines and more than three million internet sites.

The biggest and by far the most important asset in this propaganda machinery is the Global Times. It is a tabloid that has been appropriated by the Chinese Communist Party (CCP) and now attempts to pass off as a daily newspaper. Earlier it came out only in the Chinese language for internal consumption; in 2009 it started publication in English to cater for “international readership.” CCP openly acknowledges ownership of this media outlet and holds it responsible to comment on issues with a national perspective.  Global Times  is reported to have a reach of nearly 2 million followers. It is from this newspaper that the world gets to know what China thinks, notwithstanding the fact that the reportage is biased, speculative, toeing the line of the CCP and always telling half truths if not blatant lies. It is the main asset of the PLASSF. All other media vehicles take a cue from this tabloid for their propagandist responsibilities. The newspaper, therefore, has emerged as the headquarters of the obnoxious Chinese “dirty tricks department.”

Global Times has remained on the forefront of the Chinese propaganda machinery all through the ongoing India-China conflict in Eastern Ladakh, as it was earlier during the Doklam and other incidents of border related tension between the two countries.

During the Galwan face-off in mid-June,  when India reported the loss of its three soldiers including Col. Santosh Babu, the Global Times slammed Indian media for “unprofessional reporting.” Alongside, its Editor-in-Chief, Hu Xijin, issued a warning through a personal tweet. “Based on what I know, Chinese side also suffered casualties in the Galwan valley physical clash. I want to tell the Indian side, don’t be arrogant and misread Chinas restraints as being weak. China doesn’t want to have a clash with India, but we don’t fear it,” he wrote. This unsolicited advice, its timing and crude presentation clearly indicates the nexus between the PLA and the tabloid.

When the clash escalated, leading to the loss of 20 brave Indian soldiers and almost twice the number of casualties reported on the Chinese side, it was Global Times again that came out in aid of the beleaguered Chinese military a week later. It did admit to Chinese casualties but with a twist. “If China releases the number which is less than 20, the Indian Government would again come under pressure: Observer.” The “Observer” was added to shed all responsibility for the authenticity of the post. 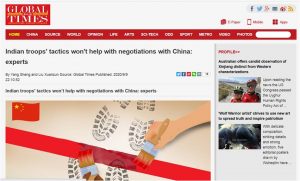 A cursory look at the headlines of other pieces written by the tabloid mainly in the name of two reporters Yang Sheng and Liu Xuanzun make the embedded “yellow journalism” of Global Times very clear. “India underrates Chinas will to defend every inch of territory” wrote Yang Sheng on 3 September. “Indian troops’ tactics won’t help with negotiations with China: experts” said the writers on 9, September a little before the Shanghai Cooperation Organisation meeting of foreign ministers of the two countries. Such articles, invariably quoting unknown experts and analysts, are being published in the newspaper on a daily basis. This is crude out and out propaganda.

The Global Times is also a conduit for purchasing the services of certain collaborators within India. On 19, September, Delhi police arrested a senior journalist, Rajiv Sharma, for allegedly violating the “Official Secrets Act.” According to the New Delhi police, Sharma passed sensitive defense and strategic information to Chinese intelligence officials in Kunming. Also arrested were a Chinese woman and her Nepalese companion who could be his handlers. In the course of investigations it has emerged that Sharma wrote for the Global Times from 2010 to 2014, it was during this period that he was recruited by a Chinese intelligence agent named Michael. How many more Sharma’s are in the payroll of Chinese intelligence and Global Times? Definitely, many skeletons will come out of Sharma’s closet.

As a response to the Rajiv Sharma issue, Hu Xijin has said that “Global Times” has a large number of special writers and ordinary authors all over the world, and, “it is very common for someone to write for us from India.”

Chinese media influencers are often termed as a key Line of Effort (LoE). They may be crude but are adept at identifying and targeting democracies like India that believe in freedom of speech and expression. Half truths repeated with regularity often impact gullible minds. Some so-called defence experts, who have to speak but are not privy to information, fall prey to Chinese misinformation and quote it as a credible source to the detriment of the Nation.

So far as its internal security is concerned, China has no qualms in the use of its high technology threshold to stop the flow of such information that CCP and PLA deem unfit for consumption of its local population. A recent such example is the ban on the WION website in China.

It is imperative for all Indians and especially Indian media to remain ever vigilant of the machinations of the evil Chinese propaganda machinery. We should not allow it to take advantage of our democratic norms to exploit and weaken us with the spread of misinformation through distorted and biased narratives. It is best for us to keep absolute faith in our Armed Forces who are shouldering, most successfully, a very challenging responsibility on our borders. We need to always remain assured that they will give their lives but never let down the Nation. If India remains steadfast, the Chinese hybrid war capability will get nullified and it will lose its inherent strength.

(Jaibans Singh is a geo-strategic analyst. writer and commentator)