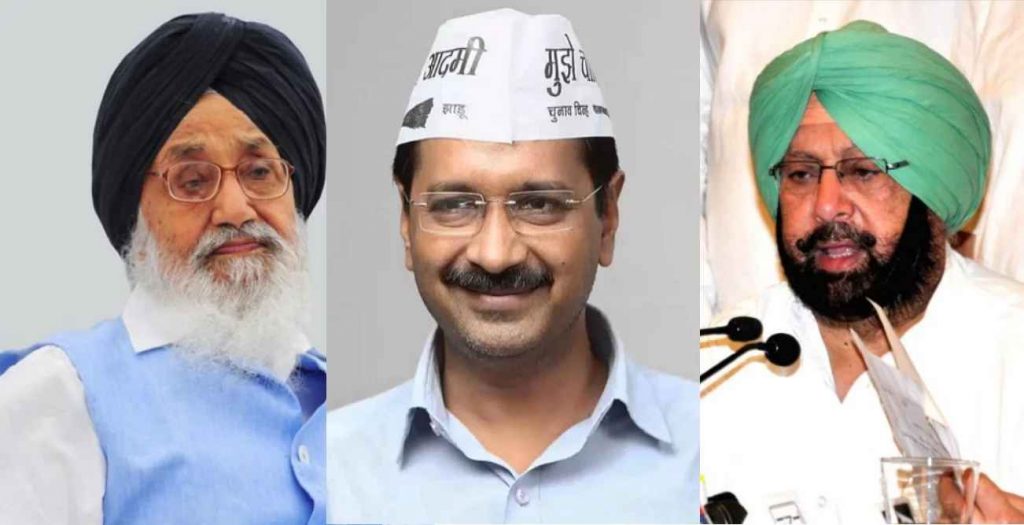 As election fever overwhelms India we have, in Punjab, a complete void in political leadership; the problem has attained critical dimensions. All parties are putting their best foot forward; selecting the best candidates and launching aggressive election campaigns. Punjab too is in the fray but here the scenario is a bit different, parties are finding it difficult to find appropriate candidates and those selected trigger a cycle of internal dissension that is both unprofessional and graceless.

The fissures in the Aam Aadmi Party (AAP) came to the fore in mid 2018 when a simmering internal revolt came out in the open. Leaders like Sukhpal Singh Khaira and Dharamvir Gandhi left the party as did many others. It may be remembered that this was the party on which the distressed people of Punjab had pinned all their hopes to break the vicious cycle of power sharing between the Congress and the  Shromani Akali Dal/ Bharatiya Janata Party (SAD-BJP)) combine. In the parliamentary election of 2014, the people of Punjab voted for AAP despite the Modi wave. That the AAP leadership could not resolve the differences for the sake of their electorate is quite unfortunate. There can be no bigger example of a political leadership letting down its people. The beauty is the APP as well as the rebels have entered the election fray, such is their gumption!

The SAD, which lost the State Assembly Elections to the Congress and was also overtaken in seats by AAP, went through its own brand of internal revolt in the second half of 2018. The seed was sown in 2017 when the patriarch, Prakash Singh Badal, could not get over his love for his family (read son) and handed over the mantle to him, leading to a vertical split in the party. Many senior leaders including Ranjit Singh Brahmpura, Rattan Singh Ajnala and Sewa Singh Sekhwan left the party and are attempting to stitch up an alternative power base.

The leaders of the ruling Congress party have shown their self serving face in the distribution of seats for the upcoming elections. Each allotment as put other so-called leaders into a huge sulk. They are voicing their grievances in the media and making a spectacle of their party. These worthies whom the people had elected to ensure development, progress and prosperity of the state fail to see the falling social and economic parameters and are content in concentrating on their personal upliftment.

It would be worthwhile here to discuss the performance of the outgoing esteemed Members of Parliament (MP’s) from Punjab. The performance has been measured in a Pan India survey by PRSIndia. According to the data collected, the standing of Punjab in comparison to all other states in some parameters is given in subsequent paragraphs.

Debate Participation: Punjab is  at 20th position with a debate average of 23.8 percent; Himachal Pradesh is leading with an average of 86.3 percent

Questions Asked:  Punjab is at 22nd position with question average of 170; Lakswadeep is leading with an average of 631.

Attendance: Punjab is at 17th position with average attendance at 78 percent. Manipur is leading with an average of 98 percent

Private Member Bill:  Punjab is in 14th position with average at 0.7 percent. Delhi is highest at 5.6 percent.

There are many more parameters; performance is as dismal in those too.

India Today has carried out a study and given ranking to all MP’s based on their performance. From Punjab the highest rank has gone to Ravneet Singh Bittu who stands at the 60th position with A+ grading.  Next is Prem Singh Chandumajra at 122 position with a B+ grading followed by Santokh Singh Choudhary at 221  position with a C+ grading. Sher Singh Gubayya is at 261 with C grading, Harinder Singh Khalsa at 271 with C grading, Dharamvir Gandhi at 281 with C grading, Ranjit Singh Brahmpura at 316 with D+ grading, Bhagwant Mann at 364 with D+ grading and Sadhu Singh is bringing in the bottom at 412 position, no need to tell the grading. Can it get more shameful than this?

From the foregoing it becomes quite evident that the so-called leaders of Punjab who were mandated by the people to represent their interests at the national level have failed miserably. They have humiliated the state in the most esteemed institution of the nation with their complete lack of endeavour and application and are now shamelessly fighting with each other for seats in the forthcoming Assembly. Their personal ambitions and aspirations are reigning supreme; party loyalty is a distant second and loyalty/dedication to the constituency does not figure anywhere at all.

While the state is in a leadership crisis, Sikhs and Punjabis are making a very high and respectable niche for themselves in the international political spectrum. Here are a few examples.

Jagmeet Singh has made history by becoming the first Indian and Sikh to be elected leader of a big political party in Canada.

Harjit Sajjan is the Defence Minister of Canada.

Nikki Haley aka Nimrata Randhawa has served as the Governor of South Carolina and also held a Cabinet ranking position in the US administration.

Preet Kaur Gill is the first Sikh woman elected to the UK House of Commons.

Kanwaljit Singh Bakshiis the first Indian and first Sikh to hold the position of MP in New Zealand.

There is no shortage of honest, hard working, inspirational political leadership in the Punjabi and the Sikh community, unfortunately, all of it is in foreign shores. What Punjab is left with is fatuous, double speaking, self-serving, and visionless political leadership. Sadly, political parties are repeating their failed candidates all the time. They are not scouting for talent and bringing in fresh faces eager to make a mark. The environment is marked with feudal indifference and apathy.

In a democracy it is the people who set the pace for politics. It is now up to the people to compel the politicians to shape up or ship out. People have the power which they must use judiciously. They have to force the political establishment to deeply introspect and throw up a leadership that can perform and not convert politics into a comedy circus.