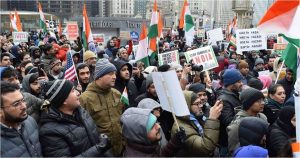 On February 26, 2021, the Chicago City Council deferred the passing of the Anti-India, Anti CAA Resolution to their next session in March 2021. Thus the Chicago CAA fight enters Round 6. Round 1 through 5 go to the Indian Americans for being able to resist the passage of the resolution for 7 months.

But it’s not over.

The city councilors who are more used to laid back but efficient sessions more akin to the American drawl are now suddenly exposed to the high intensity South Asian chatter and divisive campaigns around laws of a foreign country.

These small town city councilors are mostly clueless about these other world affairs. But as soon as they hear buzz words like human rights violation, they tend to go ahead and sign at the dotted line. A soporific Indian American community that has never engaged with City Councils in cities like San Francisco and Alameda County expedites the process by no participation.

At other times, the strong political clout of the other side, as in Cambridge Mass, and Albany NY gets quiet signatures behind closed doors and declares victory in news outlets. In rare instances, like In Seattle and St Paul, we get a whiff of it and we put up a good fight but capitulate in frustration, as the city councilors vote along party lines. Both are strongly Democrat cities.

As with all actions of the anti-India brigade, their motives are ulterior, their methods are underhand and their attitude is aggressive. Led by organizations like CAIR (Council on American Islamic Relations). They work on passing anti CAA and anti-Indian resolutions across the United States and in other parts of the world.

We get the news usually secondhand, after the resolution is passed, mostly from newspapers like The Muslim Mirror. Or sometimes when we get a whiff, like in Seattle and St. Paul, a big fight ensues, yet with quick capitulation.

The Indian American community in Chicago has deep roots, includes many motel and small business owners and has continued a level of civic and political engagement that is usually absent among the newer settlers who have arrived during the Tech Boom.

These factors have helped the Indian Americans Community to galvanize, mobilize and organize some level of resistance, to counter this anti-India resolution when it moved in the City Halls of Chicago.

The sneaky anti-India resolution starts by hailing India’s democracy and Independence Day, precisely because it was first introduced weeks before the August 15th. Then it breaks into a new tone as the resolution then goes on to admonish and condemn India for its Citizenship Amendment Act.

That was in July August time frame, in Round 1. After Round 1, the resolution was moved to the Health and Human Relations committee, a much smaller group that was able to listen to both sides presenting their arguments and the Chicago Indian American teams worked hard to keep this resolution at bay. And so it did, until recently, when the Health and Human Relations Department passed the anti-India resolution in Round 3 and mainstreamed it to the City Council.

Now the Resolution has become an all-encompassing juggernaut, still retaining the old Anti-CAA language but also condemning India for human rights violations in Kashmir, for persecution of minorities, freedom of press and all the shebang throwing in everything for good measure, making sure something will stick.

In Round IV, the City Council deferred the resolution hearing, to the next meeting. That would mean next month on March 24. But as another sneaky move, the resolution was re-introduced within the next three days, in an interim session which was meant mainly for passing the city budget.

That was Round V.

The recent round IV and V has revealed the hollowness of the other side, their false claims and unwarranted insidious agenda to malign the current Modi government. It has also shown how much work the Chicago Indian Americans are putting in. The biggest strength of the community is that they have tried to galvanize everyone, with all hands on deck. 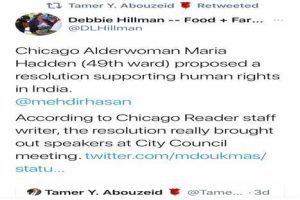 Firstly, the Indian community garnered a signature campaign and a social media campaign with over 3700 signatures. The other side had just 123 signatories. Many Organizations in Chicago and around the country wrote in support of the Indian Government while opposing the resolution. Organizations like Federation of Indian Americans, VHPA, Asian Hotel Owners Associations, Asian Store Owners Associations, World Hindu Council, HinduPact and CoHNA lend their weight.

We countered with strong messaging and facts,” said Amitabh Mittal who is associated with many organizations and is an active community leader in Chicago. When the other side brought out some figures condemning 200 persecutions of minorities in India, we countered with a fact based report. “The City of Chicago has seen a rising homicide rate from 506 in 2019 to 740 murders in 2020,” said Mr Amitabh Mittal quoting a media report. And this is in a population of 3 Million whereas in India its 200 deaths in a population of 1.3 Billion. How’s that for perspective?

Thirdly, effort was made to highlight the need to address the religious persecutions in Bangladesh, Afghanistan and Pakistan through the CAA laws. Mr. Sachin Tripathi has over the months, helped to present the refugee testimonials through his outreach. This has brought real life stories to the fore, to make sure the aldermen understand the ground realities.

Another young, compelling female voice, stood for the changes in Kashmir, calling it a restoration of human rights, including for women and Dalits and the Valmiki’s of Kashmir. As the anti-India side has detailed UN Commissioners call out to Kashmir Human rights, it is pertinent to note, that lack of internet access was the main violation cited by the UN as during COVID, that impedes children’s education. “Kashmir has been peaceful since the removal of 370. Election with larger voter turnout than the population of the city of Chicago has been recorded there and this is a hallmark of democracy. The biggest human right is the right to live not the right to access to internet.” She remarked.

How do you solve a problem like Maria Hadden?

As Maria Hadden proposed the resolution, the Indian Community in Chicago has wondered aloud as to when the City Council will look into the deep distress, unemployment, health issues and rising crime rate in the City. But no! Here we are discussing a government and democracy many miles away.

Social Media was abuzz. Never before had such civic engagement been noticed around any city business remarked one tweet:

Due to a high level of engagement of the Chicago Indian American community, with a strong base in the city in terms of businesses and deeper roots, the city has been actively fighting this Anti India Resolution R2020 -583, supported by CAIR.

While CAIR assembled 24 organizations to sign, alert Chicago residents found that 7 of their organizations were defunct, annulled due to irregularities. Not only that but 2 of these were not even American organizations but were based out of UAE. Such underhand and insidious methods are widely prevalent in this lobby and not surprising at all.

The fact that the Biden Administration has prominent Anti Indian faces in its team has not helped. The speakers who want the resolution to pass, quoted anti CAA positions, selectively from Joe Biden’s manifesto. Of course, they omitted the mention that the Biden government supports the Farm Bills by India.

Strong arguments by the Indian Americans caused three aldermen to withhold their vote and defer for a later session to research further and study the issues better. Anti-India forces are furious and trying to tarnish these aldermen. Social Media was full of messaging, questioning them.

The next meeting in March and this may be our last chance to make an impact. Fifty aldermen make up the Chicago City Council, each representing one of Chicago’s wards. The anti-Indian lobby has been well known to use quid pro quo and poaching techniques to bring votes to their position. These non-binding resolutions are a perfect two in one gain for this group, accessing systemic penetration into the US political machinery while at the same time maligning India.

They started out with about 4 votes moving on to 7 and 9 in the second rounds and now they are at 17 votes. They just need 26 votes in all. Regardless of what is true and right, if at all they manage their machinations and reach that number, it will be a sizeable victory for the anti-India lobby.

An Anti-Hindu and Anti Indian American campaign has completely changed the narrative in media and in political circles. Desecration of Gandhi Statues and mob attacks as seen in many places recently, are a foreboding of a tough environment for a quiet, model community that has so far done well minding its own business.

We may not have that option left anymore.

These political city resolutions may be non-binding with no real strategic implications on the Indian Government. But if a significant number of cities pass these resolutions, it may result in a Congressional session in D.C. (like for Jammu-Kashmir in November 2019) which can cause a lot of bad press for India.

Even at a smaller scale, these individual resolutions create a media narrative, in school research and academics, harming the image of the Indian Americans.

Only an aware, awake and engaged Indian American can help us continue our legacy and future march in our adoptive country. Only coming together on a common platform can help us counter this Juggernaut.