You are here: Home / Areas of Study / Governance & Politics / One Nation One Election: An idea whose time has come
Share 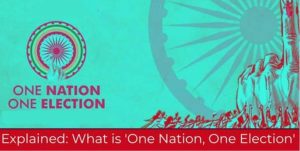 When the Prime Minister said “One Nation, One Election’ isn’t just an issue of deliberation but also a need of the country, It sounded like a dream come true to all Indians. However, considering that political ideology has taken a downward spiral in recent times, it appears difficult to achieve this. In present Indian polity, self interest of politicians is supreme, interest of their political party comes second and national interests comes last, always and every time. Any idea, good or bad, is supported or opposed on party lines. Support is never issue based. The intelligentsia and experts (actual or self proclaimed), sadly,  have also become partisan and are following a, “we or they” paradigm.

Almost every day we hear that elections are being conducted in some segment or the other, ranging from parliamentary polls to the state polls and down to the grassroots level of Panchayats. Each of them has a separate voters list. While the age for voting is fixed at 18 years, having different voters lists is not understood. Yet, no effort has been made to reconcile the same and prepare a uniform list that can be applied to all segments. Possibly, here too vested interests are overtaking the national interest. This point has been very aptly described by Prime Minister Narendra Modi in his statement, “We must  remember that when politics take over people and nation-first policies, the nation has to pay adversely in such situations.”

Historically speaking, elections during the first two decades after Independence for the parliament and state legislative assemblies were held simultaneously, i.e., during 1951-52, 1957, 1962 and 1967. Dissolution of certain assemblies, followed by the dissolution of the Lok Sabha in 1970 and subsequent general elections in 1971, along with indiscriminate use of Article 356 (President’s Rule) disrupted the schedule of simultaneous elections, forever.

The idea of one nation one election made its début once again in the first annual report of the Election Commission in 1983. It had supported holding simultaneous elections to reduce expenditure, for effective use of manpower and human resources and to avoid hardship for the common people. The topic was revived and rejuvenated by the 170th Report of the Law Commission submitted in 1999.

The proposal gained momentum with its mention in the manifesto of the BJP for the 2014 Lok Sabha election. Thereafter, NITI Aayog issued a working paper on the subject in 2017 titled, “Analysis of Simultaneous Elections: The What, Why and How.” It broadly recommended a gradual move to synchronization of elections to parliament and state legislative assemblies between 2019 and 2024.

In a study of the international scenario, it is revealed that a system to ensure simultaneous elections or fixed term does exists in certain countries like Germany and UK, for sure. Even in the USA, the term of the President is fixed for 04 years with maximum two terms because of a very difficult impeachment process.

The arguments in favour of holding simultaneous elections can be summarized as follows:-

To conduct simultaneous elections in India, many amendments to the constitution of India are to be made. Briefly these are:-

Such amendments would require an absolute majority in both houses of parliament. The architects of the Constitution made the amendment process difficult by design in order to ensure that only such amendments that are absolutely necessary are passed. They wished to maintain the sanctity of the Constitution. Ratification of the amendments by not less than one-half of the state legislatures may also be required as a matter of abundant precaution. A political consensus is, therefore essential for the large scale amendments 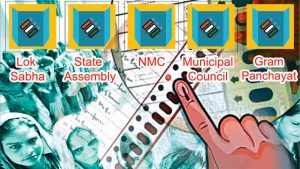 This would require rising above petty politics and keeping the “Nation First” ethos in mind. Perhaps the biggest hurdle would be creation of this political consensus. The process would also require some states to agree to curtail the terms of their assemblies and forgo their regional identities. Considering the manner in which political parties respond to each other, such a constitutional process would be possible only if a single party holds absolute majority.

All these amendments will also result in hundreds of cases landing up in courts. There always remains a probability of the amendments being turned down by the Supreme Court on the premise that the fundamental structure of the constitution cannot be changed.

It will also be said that simultaneous elections threaten the federal character of our democracy. Regional parties will have the apprehension that large national parties would reap benefits on the basis of economy of scale.

In case of a hung Lok Sabha, there is no provision for President’s rule like in case of states. Given the fractured polity of the nation, we may be forced into national elections in quick succession.

In consideration of the challenges involved. The implementation could be carried out in three phases as under-

Meeting of minds may be a good beginning in our pursuit of the goal of “One Nation, One Election. Focused groups of constitutional experts, think tanks, government officials and representatives of political parties could be formed to work out appropriate implementation related details. The tenures of some state assemblies will be curtailed or extended, for which a political consensus is prerequisite.

One India One Election’ would be a good initiative if it could be carried out with the proper execution of policies and rules, taking care of the rising need for good administrative staff and security.  Realisation of this dream will require not only the meeting of minds, but also a resolute determination to act together. Harmonious coordination between Legislature, Executive and Judiciary will be the key to unlock the “One Nation One Election” dream.

This brilliant idea of “One Nation, One Election”  appears to be a bit utopian at present, like the fabled ‘Ram Rajya.’ However, it is an idea whose time has come and those who dare to dream big have the perseverance to fulfill their dreams and pioneer the change. The well meaning citizens of this country look up to our dynamic Prime Minister Narendra Modi to be the harbinger of change  in this matter.

(The author is a social activist, career consultant and a motivational speaker. E-mail – www.majgencpsingh.com)